11 Places to Visit During Golden Triangle Tour in India

11 Places to Visit During Golden Triangle Tour in India 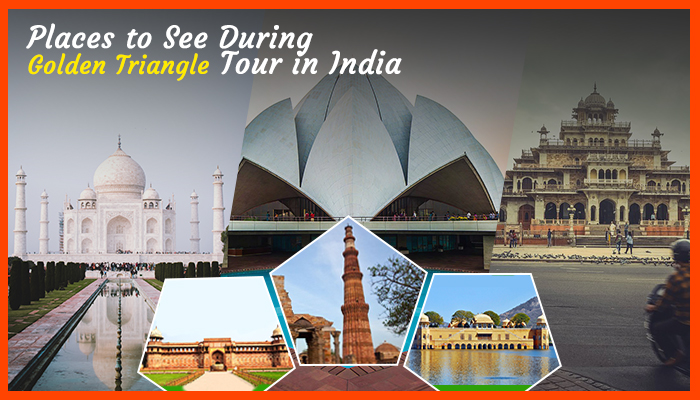 It is almost known to everyone that the Golden Triangle tour of India comprises three cities (Delhi, Agra, and Jaipur). These three destinations of India offers a variety of experiences to travelers during their golden triangle trip in India.

These three destinations are situated at a distance of 200 to 250 kilometers from each other and they offer many attractions to explore during the trip. Here are some best places that you will see during your trip to Delhi, Agra, and Jaipur.

Akshardham Temple is a must-see destination in Delhi during your golden triangle trip in India. The temple is a sign of India’s rich history, culture, and traditions. Due to its good connectivity from all the metro routes of Delhi, it is very easy for tourists to reach the temple.

Lotus Temple is another iconic sight to visit in India during the golden triangle trip. Along with its spirituality and peace, the Lotus temple is also known for its beautiful architectural design which is in the shape of a Lotus Flower.

Considered as one of the largest mosques in India, Jama Masjid represents the past of ancient Delhi that pulls many arts and history lovers throughout the year.

Declared as one of the world’s heritage sites by UNESCO, this incredible monument in Delhi was built in 1638 by Sahjahan. Due to its unique architecture and scenic beauty, the place is often filled with many tourists during the whole year.

Qutab Minar is one of the tallest monuments in India and of course, the must-visit spots during your golden triangle trip in India.

Being one of the seven wonders of the world, Taj Mahal was built by Shahjahan in the loving memories of his wife Mumtaj. This incredible monument is declared as one of the world’s heritage sites by UNESCO. Your golden triangle journey will be incomplete without having a glimpse of the Taj Mahal.

Being the symbol of architectural excellence and religious beliefs, Fatehpur Sikri was discovered by Mughal emperor Akbar in the 16th century. This place is a fine example of ancient Mughal architecture that makes it one of the most popular tourist attractions in Agra.

Built with pure red stones and white marbles, Agra Fort also represents the ancient Mughal architecture in India. After being transformed from a military structure to a luxury palace, Agra Fort still has some finest Mughal structures such as Shish Mahal, Diwaan-e-khaas, and Diwaan-e-aam. One can not afford to miss to visit this amazing fort during the golden triangle tour in India.

Famous for its stylish Mughal architecture, The City Palace of Jaipur signifies to the ancient Rajasthani culture. The palace was built by Maharaja Sawai Jai Singh II in the 17th century. The palace hosts Chandra Mahal and Mubarak which is now converted into a museum. Apart from these, the City Palace also offers an amazing view of Pink City from its grounds.

Also known as the palace of winds, Hawa Mahal is one of the popular landmarks in Jaipur which is also operating as a museum that displays many interesting handicraft items from India’s ancient history.

Situated at a distance of around 10-15 kilometers from the main Jaipur city, Amber Fort was built by Maharaja Mansingh in the 15th century. This place is an ideal destination for history, architecture, and photography lovers.

So these are some of the best places that you will see during your Golden Triangle tour journey in India. There are several more places that you can see during your golden triangle trip but it depends on your time duration and itinerary of the tour. If you have any other queries regarding the Golden Triangle Tour in India then ask it by commenting in the comment section below.

Add vanshikasharma to your subscriptions feed