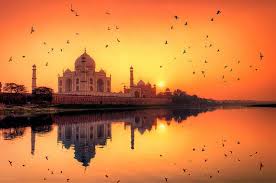 This tour is the desire of many travellers who want to visit Taj Mahal in very little time. Same Day Agra sunrise Tour is the best tour which starts from new Delhi then drives to Agra via Smooth highway ( Yamuna Express Way).  In this tour you” ll see the beauty of Taj Mahal & Agra Fort and also visit the local markets of Agra like Handicrafts and Marble store.

Early Morning our representatives will pick up from Delhi Hotel and proceed to Agra. Agra is under Smart city and situated near Yamuna river in the Indian state of Uttar Pradesh established by Akbar. In ancient time Agra known as the “Agrevan” & was the Capital city of India. There are many historical monuments like Agra Fort, Itmad-Ud- Daullah, Sikandra, Fatehpur Sikri, but one Day tour you can visit only Taj Mahal & Agra Fort. Taj Mahal is the symbol of love, which was established by Shah Jahan for the memory of his wife Mumtaz. The inside reflects an interesting synthesis of Hindu and Central Asian architectural styles which are simply amazing. Before returning to New Delhi, enjoy some shopping in Agra known for its fabulous handicrafts made of marble and soft stone inlay work. The Mughals were great patrons of arts and crafts. Empress Nur Jahan took a personal interest and was an accomplished artist herself in zari embroidery work.

Taj Mahal View in Sunrise- It is lovely monument & defines the beauty of Agra. If you want to see the amazing view of Taj, So you can rise early morning & go to visit Taj Mahal.  Taj Mahal Is The Most Beautiful Monument In The World But It Is Amazing To See That How Nature Adds Pulchritude To Its Presence. It Is Surreal To Watch Taj Mahal During Sunrise And Sunset And Most Of The People Opt It As This Sunrise Taj Mahal Tour. Seeing Taj Mahal To Glow Thousand Folds Due To Dawn And Turn Herself Into A Stunning White Beauty Could Be The Best Moment In Someone's Life. Hundreds Of People Awaits Hours Outside The Entrance Just For A Single Glance Of It. In the Taj Mahal, you’ll see the Tombs of Shah Jahan & Mumtaz who was the main character of Taj Mahal. Shah Jahan was never able to complete a black marble mausoleum he planned for himself. Deposed by his son, Shah Jahan was imprisoned in the Red Fort of Agra and spent lonely hours staring across the Jamuna River at the monument to his beloved queen. He was eventually buried beside her in the Taj Mahal. Mumtaz Mahal (1593-1631) was the beloved wife of the Mughal Emperor Shah Jahan, in whose fond memory and tribute to her beauty was the grand monument of the Taj Mahal built. Mumtaz’s maiden name was Arjumand Banu Begum, and she was born in April 1593 in Agra, Uttar Pradesh.

Taj Mahal view in Sunset- Sunset Taj Mahal tour is the best tour for travellers to see the beauty of Taj Mahal in the set of Sun. Sun appears reddish in the time of 7:14 PM. You can see the Sun setting just back of Taj Mahal which is must-see for all Agra visitors. On your first day of the visit - go to Agra fort in Morning, afternoon- Tomb of Itimad-Ud-Daulah and only in the evening just one hour before Sunset to Mehtab Bagh. The Taj Mahal was built by the Mughal emperor, Shah Jahan to house the tomb of his wife Mumtaz Mahal. The Mehtab Bagh is a recommended best place to watch the sunset in Agra, and although it’s possible to see a side view of the Taj Mahal and the sunset, it’s not that good as it’s not like the sun sets behind the Taj Mahal, so sunset is a good time to go but so is any other time of day! Note that as soon as the sun sets, this park closes and you have to leave. Mehtab Bagh. was built by Emperor Babur in the early 1500s and the width of the gardens perfectly aligns with those of the Taj Mahal. It was then famously known as the “moonlit pleasure garden” when Emperor Shah Jahan identified it as the ideal site from which to admire the mausoleum. So rise up early in the morning & enjoy the beauty of Taj.

Splendid Taj Holidays is the author of this new note we describe our opinion. If you want to visit so you can visit Same Day Agra Tour & Golden Triangle Tour 4 Days for visit in India’s historical forts & palace.

Add splendidtajholidays to your subscriptions feed