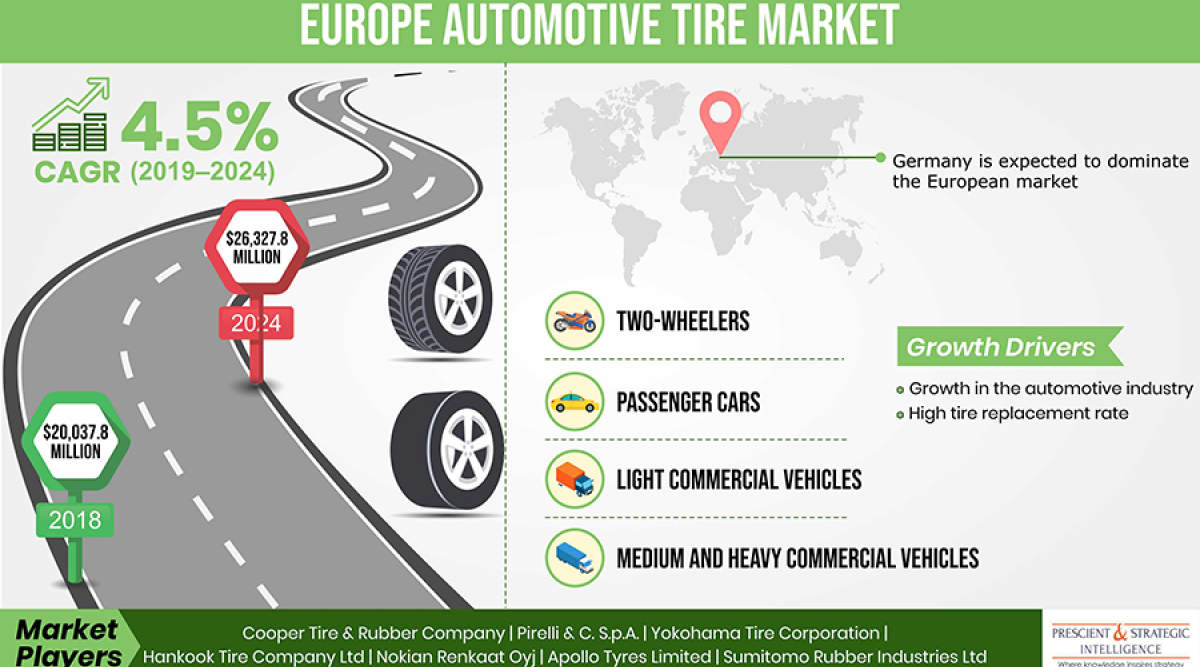 The European automotive tire market size is likely to reach $26,327.8 million by 2024 and is expected to grow with a CAGR of 4.5% during the forecast period. The development of the automobile industry in Europe is the key contributor to the growth of the tire market in the region. Additionally, with the increasing average lifespan of vehicles due to technological advancement, the replacement market of automotive tires is expected to boost enormously, leading to the growth of the overall tire market in Europe, according to P&S Intelligence.

Based on design, the European automotive tire market has been categorized into radial and bias tires. Between the two, the radial tires category held larger market share, in terms of sales volume, in 2018. The category is expected to continue dominating the market during the forecast period as well. This is due to the fact that radial tires are more long-lasting than bias tires due to their construction, which comprises perpendicular polyester plies and crisscrossed steel belts. Additionally, these tires are largely used in passenger cars as they provide a smoother riding experience than bias tires. These collectively contribute to the growth in demand for radial tires in the market.

Geographically, Germany dominated the European automotive tire market during the historical period and is expected to continue dominating the market in the future as well. The country is the hub of automobile industry, where maximum number of passenger cars are being produced and sold each year, in the world. In 2018, over 5.1 million and over 3.4 million passenger cars were produced and sold in Germany, respectively.

The European automotive tire market was consolidated with four major players, namely Compagnie Générale des Établissements Michelin, Bridgestone Europe NV/SA, The Goodyear Tire & Rubber Company, and Continental AG, together accounted for over 70% of the market share in 2018. Compagnie Générale des Établissements Michelin is the largest player in the market, due to the existence of an extensive dealer network across all European countries as well as the presence of a loyal customer base in France. The other major players operating in the market are Cooper Tire & Rubber Company, Pirelli & C. S.p.A., Yokohama Tire Corporation, Hankook Tire Company Limited, Nokian Renkaat Oyj, Apollo Tyres Limited, and Sumitomo Rubber Industries Limited.