Everest Base Camp Trek - Journey to the top of the world

Everest Base Camp Trek - Journey to the top of the world 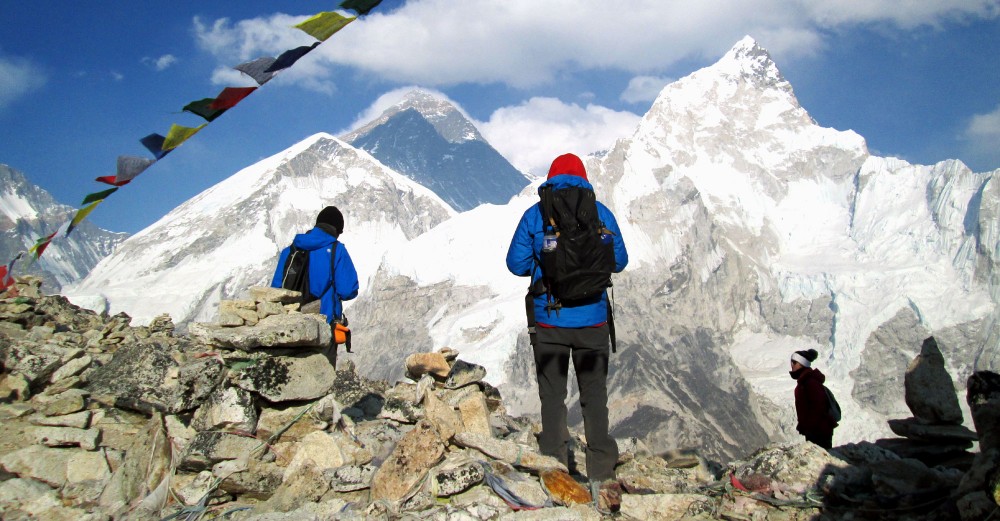 Everest base camp trek is the ultimate trekking destination for every backpacker. As the world class-trekking destination in the world, Everest Base camp trek takes you to the right in the lap of Mount Everest. Most trekkers have the ambition to observe the tantalizing glimpse of Mt Everest & this is done from Everest base camp at (5340m.). From Kala Pattar, which ideally sits on the southern border of Pumori and 200m high from Everest base camp, you can view Mt Everest and its gripping, thrilling sights. Kalapatthar at (5545m.) offers you stunning views of Mt. Amadablam (6812m.), Mt Lhotse, Mt Thamserku (6623m.), Mt. Nuptse, the Khumbu glacier and Kwangde including Mt Everest. Climbing above the tree-lines in the Everest Region…this is an alpine country that exceeds your expectations in your discovery of the wild…

After the conquering of the highest mountain peak in the world, Mt. Everest, by Sir Edmund Hillary and Tenzing Sherpa, the Everest region has become a deep attraction for all people making it one of the most popular Climbing and trekking regions to be known in Nepal.

The Everest or the Upper Khumbu region has within its possession the highest wildlife reserve in the world, the Sagarmatha
National Park. This park has been listed as a World Heritage Site in 1979 by UNESCO for its distinctive natural and cultural uniqueness.

Not only Mt Everest but also Cho Oyu (8153m.), Lhotse (8501m.) and Mt Makalu (8481m.) make up some of the highest peaks in the world found in the Everest region. The trails down here are tougher than in the Annapurna region, Langtang region.T his route creates your life dreams of true adventure on the roof of the world, Mt Everest.

Solu Khumbu is famous for its legendary trails, the friendly Sherpa settlements, ancient tranquil monasteries, Chortens, Gompas and various never heard or seen vegetations, birds, and animals found in Sagarmatha national park that adds to the wonders of your trekking.

Sagarmatha National park has listed on the world heritage site by UNESCO in 1979. This region has options where you can fly or hike into the Everest region.

The Everest region is also home to various cultural diversities of Sherpa and Gurung communities throughout your trip; this includes the famous Mani Rimdu and Dumje festivals in Lukla, Namche Bazar, Phakding, Khumjung, Thame, Tengboche & Gorekshep. The famous hospitality of the Sherpas given to visitors is amazing.

The trekking routes covered during the trek are awesome and for sure you will feel that 14 days trek in Everest Base Camp is not enough for you. Our Popular 1 Day City Tour known as  Chandragiri package and we also offer the best services helicopter tour in Nepal and “helicopter price in Nepal”

Add glorioushimalaya to your subscriptions feed

Life is feudal and volatile for most of the times The candidature of the nearest american express bank
is found for the success. This aspect is found for the hoisting of the joy for the expected technique for the challenges by all manners.

This is a great article. Very nice and interesting idea, I really like your websites. You always put your best effort into each article. I highly recommend it, phrazle weaver wordle.

I have nothing to say but all have to praise the management and this place to attend. Staying in this hotel first and important thing is you do not need to worry about accessing anything to make you amuse with wonderful activity like writing online cipd assignments.

For those who have mastered the game and are eager for a fresh challenge, the realm of solitaire is the place to be. Slope 3 is a game with surprising obstacles that you won't see coming. That road goes on and on, waiting for you to sign up.