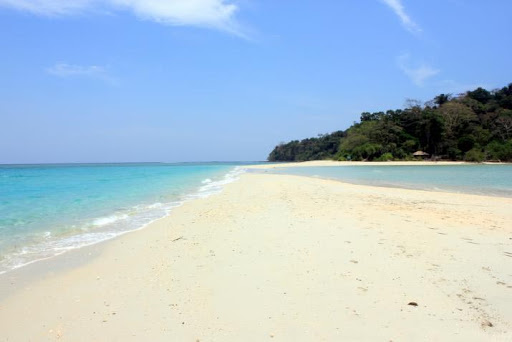 Is the Guitar Island full of guitars? Are the woods used for making guitars are procured from the island?  Does the basic shape of the island resemble that of a guitar? Yes! You said it right, nevertheless, not completely. Like these numerous questions do arise in the minds of those curious travellers, who are likely to visit the exotic Island. Well, here we are going to confer about the Guitar Island that belongs to Long Island in North Andaman group of islands. If at all you are planning to visit them on your holiday, the below-given facts will prove to be helpful. Moreover, such a prospect could be one of the rare things to do, that in usual cases would not be included in many of the travel itinerary based in the Andaman Islands. Listed below are the things you need to know about the Guitar Islands of Andaman and Nicobar Islands.

This is s major misconception about the Guitar Island that has been popularized by many either knowingly or unknowingly. As stated earlier in this write-up, there is some resemblance in the shape of this landmass, but never a perfect round hollow space at its centre so as to look like a ‘guitar.’ Still, all are not the same here to Guitar Island, especially when gazed from the sky. Nonetheless, some had opined that the Island does form a reflection of it’s uniquely shaped in the calm seawater during the twilight in the shape of a guitar.

Nobody actually lives here, not even any tribes

Guitar Islands constitutes one among the hundreds of other uninhabited islands in the archipelago. So when you are arriving there, you could only be getting to hear soothing sounds of waves lashing to its shores. Unlike some isolated islands of the Nicobar region where dwells the world's most dangerous tribes, in Guitar island which is much adjacent to the habitable Long Island, nobody inhabits here.

Tourists who are visiting the Andaman Islands with the motive of tranquillity and some relaxing atmosphere, their plans to hopping onto the Guitar Island could be one of the best decisions that they ever take on this eventful trip. Being a safe place with numerous features that would excite you, Guitar Island is a preferable place to be enlisted in your tour packages. The aesthetic beauty that this uninhabited island is possessing of could quench that the travel thirst of every traveller, whether it is the honeymooner, tourists on a family trip or even on a solo trip.

During low tides, the shores would look stunning

In contrast to the other white sandy beaches of the archipelago with its shallow turquoise blue shallow water, the ocean waters surrounding the Guitar Island is comparatively deeper. Henceforth the view of corals would be occasional unless there is low tide on its shore. So when you visit the island, make sure that you are hopping into them during these states of seawater, as you will be sighting some other surprises, which will be revealed in the forthcoming parts of this write-up.

Although they are an important part of Long Islands, they are rarely visited


From the popular tourist destinations of Long Island in North Andaman, the tourists could arrive at the Guitar Island by sailing on a private boat. However, barely a few of them would set out for them. The basic reasons for such a routine could be the absence of any happening water sports activities or lack of the services of the large boats to them. Anyhow, for the travellers who are longing for any aloofness from the outside world by being at the lap of nature will inevitably feel blessed.

Staying the night in the island is strictly banned

This particular feature of the Guitar Island could be deemed as a fact in continuation with the above-elaborated point. Thus, the tourists are supposed to return from the uninhabited island utmost by sunset. After which, you could stay back in any resorts as stated in your Andaman tour packages. Such a practice would be ironic to the beaches of Chennai, where people would set out from their homes and take cosy walks by the shores to soak in the cool sea breeze.

Absence of boat jetties in the island

This particular feature says much about the aloofness of the island from the outside world. Unlike the other Andaman Islands that are equipped with accessible boat jetties, here at Guitar Island add-ons of such facilities is sheer unnecessary. Henceforth, the visiting tourists do sail to them once hiring private boats from the neighbouring Long Island.

Beyond the sand bar, there is a smaller islet

You do not have to expect the appealing beauty of the sandbar amid the Ross and Smith Island. Yet the islet in proximity with the Guitar Island had been very consequential in even the nomenclature of the place. Also, this was the surprise we were hinting about. Moreover, the smaller landmass has got their own rustic beauty to be admired. During low tides, you will be able to walk up to them with your bare foot!!

Accommodation spaces are none at this remote space of the archipelago

With concern to the very limited number of tourists venturing out to the island and most notably the restrictions to stay back at the island, there are zero accommodation places here. The nearest and the most accessible resorts are located on Long Island. So, you may very well plan for a one day trip to this mirth of heaven at this part of Andaman Islands.

With these many unique features related to Guitar Island, they also now deserve to be included in your Andaman trip itinerary without any doubts. Even otherwise, there are a lot more to be explored in each of the islands in Richie's Archipelago. For which, the trip that you are planning to these exotic locations should be systematic yet enjoyable. Andaman Tour Travel based in Port Blair arranges exciting expeditions along with the inclusion of thrilling water sports activities. You too may book your tour packages now, either chatting with them online or ringing up in the WhatsApp number provided on their website.

Add andamantourtravel to your subscriptions feed