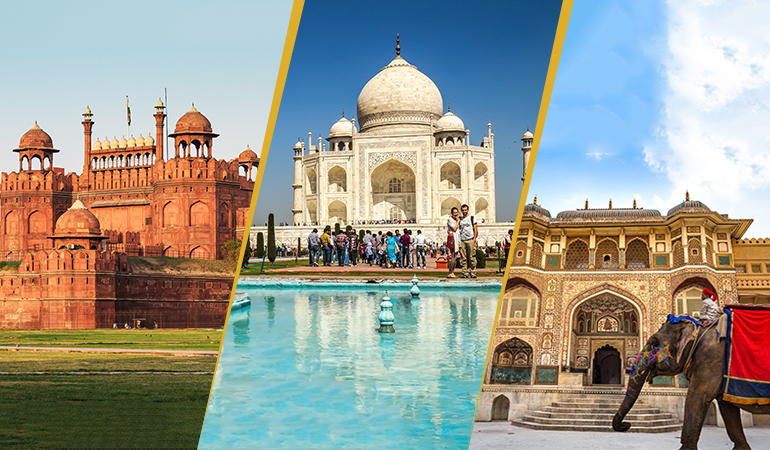 Agra, known to be the city of the Taj, welcomes tourists from all over the world with its aura of love that dates back to the days of Mughal Emperor Shahjahan. It is home to the Taj Mahal, one of the Seven Wonders of the World (now also part of the Newly Declared Seven Wonders), and many other important tourist attractions. Agra Taj Mahal Tour by Train The precise geographical location of the city is on the banks of the Yamuna River in the state of Uttar Pradesh in the northern part of the Indian subcontinent. This beautiful city is about 201 km from New Delhi, the capital of India. As borders, Agrahas Mathura in the north, Dhaulpur in the south, Firozabad in the east, Fatehabad in the south-east and Bharatpur in the west.

The intricate architectural design of the mausoleums, forts and palaces testifies to the wealth of the powerful Mughals, who made Agra their capital in the 16th and early 17th centuries. The famous heritage of inlay work on marble and soapstone is carried on by craftsmen who are the descendants of those who were occupied under the Mughals. As registered by UNESCO, there are three World Heritage sites in this city, namely, Taj Mahal, AgraFort and Fatehpur Sikri. The magnificent view of the Taj, symbol of undying love, is an experience to be cherished for a lifetime

Reaching Agra is not a very difficult task. The city has a good network of railways and roads through which it is connected to other cities (including Delhi, from which it is 200 km away) and tourist sites. Other train stations include Agra Fort Station near Agra Fort and Raja Ki Mandi Station in the center of town. Same Day Agra Tour by Train The main railway line runs from Delhi to Agra. Besides the regular trains, a luxury train called the Palace on Wheels has been introduced exclusively for tourists who have Agra as one of its destinations. In addition, tourists can also take advantage of the bus service from New Delhi to Agra. You can also travel by bus from Jaipur via national road 11, from Gwalior via national road 3 and from Kanpur via national road 2. To take a tour of the city, taxis and rickshaws are always at your service. .

There are a variety of sights in Agra to captivate tourists. The most famous and striking of these is the Taj Mahal, which has withstood the ravages of time to stand firm as a symbol of eternal love. Completed in 1653, it is in fact the last resting place of Shahjahan's beloved queen, Mumtaz Mahal. This beautiful monument is the result of years of hard work by Mughal artisans (the chief architect was Ustad Isa) under the patronage of Shahjahan.

The Taj Mahal appears as a mirage of Agra Fort, the place where Shahjahan spent the last eight years of his life imprisoned by his son Aurangzeb. This chimerical effect is brought about by a skillful application of lime, brick and white marble. Entering through the main door, one meets the verses of the Holy Quran (the religious book of Muslims) and 22 small domes. Same Day Agra Tour The number 22 evokes the number of years it took for the craftsmen to build the monument. The entire structure, embellished with exquisite stones, rests on a marble platform which in turn is built on a sandstone platform.

The tomb of Mumtaz Mahal as well as that of Shahjahan (erected after his death by his son Aurangzeb, next to the tomb of Mumtaz Mahal) is located under the most graceful dome of the Taj. Every minute detail of this magnificent marble edifice, from the minarets to the beautifully landscaped garden adorned by the fountains is as harmonious as the melody of love. This man-made beauty perfectly juxtaposes the beauty of the ever-changing sky to provide a fantastic view.

Add Goldentringleindia to your subscriptions feed