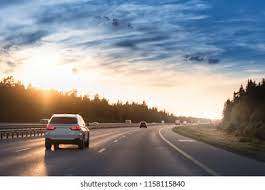 One of the great ills plaguing our society today is On Road accident claiming lives and property. Indeed, the menace of On Roadd accident is seriously and dangerously threatening the very existence of our own society. Our newspaper in screaming headlines, report almost daily on the incidence of road accident here and there all over the country. Lives are no more safe? Can one day pass without a road accident? There is a general feeling of insecurity on our roads. As a result of re-occurring of road accident, people have given series of suggestions concerning how the case of road accident can be checked. But do we proffer solutions to something its causes have not been identified? My view, therefore, is that the causes of On Road accident be traced before it can be checked.


First, the deplorable state of the nation's On Road is unremarkable. Very narrows roads and roads without road marks or lanes are common in this part of the world. There are several instances where drivers try to avoid potholes only to collide at high speed with oncoming vehicles. There are many cases while driving; the driver will not see oncoming vehicles due to up-hilly topography on our roads. Most of our On Road are covered with trees and weed, which obstruct the sight of drivers. Can we have a local, state and federal government that will use tax payers' money to build good and durable roads? Can we have a system where such roads will be maintained regularly? If the government of our day can spend good money to build and maintain our On Road this will help life safety.


Likewise, the rate at which the tanker and trailers' drivers disturb and damage the road is alarming. If most of our roads are dualised and there are separate roads for trailers, our On Road will be accident free and drivers will travel smoothly. There should also be an alternative to major roads in case of any traffic jam on the road, this will prevent many road users from spending too much time on the road.


In addition, Alcohol is a contributor to road accident. You may have heard it many times: 'drinking and driving do not mix'. Unfortunately, not many people pay heed to this advice. Most accident has occurred under the influences of intoxicating drinks. The matter of alcoholic consumption by drivers is a major threat, which has little or no attention in the past years. The threat posed by the drunk drivers has reached an unprecedented level and Nigeria rather than a witness a decrease in fatalities caused by drivers driving under the influences of alcohol like most countries involved in the fighting against On Road safety crisis, is having a dramatic increase in road crashes. Such avoidance road crashes should be blamed on poor enforcement, which has been largely attributed to lack of breath-testing facilities, inadequate resources of the FRSC (Federal Road Safety Commission). Scientific evidence and acknowledged research findings prove that consumption of alcoholic by drivers is a contributory factor to increase in roads accident in developing countries. Countries that have experienced drastic reduction in On Road crashes are due to zero tolerance of alcoholic while driving and anti-drink driving. A bill should be passed compelling all alcohol manufactures to act socially responsible either by providing a counter measure to the negative effects of their products and establishment of an agency that will militarize against Drunk Driving.


Similarly, ignorance and illiteracy also contribute to the increase rate of automobile accident. It is a pity that many On Road users perish due to lack of knowledge. Most of our drivers are illiterate, they do not understand for instances, traffic light, traffic rules, even the use of vehicle light. Imagine how beautiful life will be if all Nigerian drivers on our On Road know the importance of attending the mandatory driving school! Imagine if they could pass the driving test in theory and practical. There is a need for more public enlightenment for all road users on road related regulations. Roads users should have first aid knowledge because this will go a very long way to save the lives of accident victims. To a very appreciable extent, lack of education and non-attendance at a driving school are taking toll on human lives. Also, introducing of defensive driving technique will help prevent collisions, reduce the effect of collision and survival driving to stay alive.


Moreover, under-age and unlicensed drivers are contributing factor to On Road accident. Anybody who is not full of age (below 18 years) and drivers who are even above 18 years and are not licensed to driver on the On Road should be prohibited from using our roads. Some drivers' carries expired driving license having the wrong believe that once licensed, forever a driver. Parent should take keener interest in what their children do, to guide against under-age driving, drivers carrying expired driving licenses should not use the On Road until such licenses is renewed. Law enforcement agents should be up and doing on their jobs. Traffic offenders should be treated as such without fear or favour.


Similarly, the rate at which drivers drive recklessly cannot be over emphasized. Some of them see over-speeding as a display of ego, some even enjoys it. But come to think of it, how can driver control his car in case of an unexpected obstacle on the road while driving at a very high speed? At times, passengers will even try to caution them but often time they prove stubborn. There should be a speed limit to which any driver should drive on the road and anybody who violates the rule should be prosecuted accordingly.


We need to look into the issue of the kind of vehicles used on the On Road. The age of the vehicle is not the issue here but the road-ability of the vehicle should be of more importance. In an extremely strict manner, vehicles that are not road worthy should be sent to the recyclers ASAP. No vehicles should be on the road without having road lights, driving mirrors and other basic things. If using a car key cannot start a car, it has no business on the road in the first place. It can break down on the On Road at anytime and causing obstruction and accident subsequently. Similarly, any car that does fit should be thrashed. It should not be a matter of life and death to have car on the road.


Also, night road users should be discouraged. In fact, a law should be made against to forbid night travelling in country like Nigeria because of the poor state of its roads. Accident occurs in a broad daylight let alone driving in the night on poorly illuminated roads. Darkness on our On Road made complicated by non-road worthy vehicle lacking driving light should be given attention, one should be able to distinguish a car is coming or a motorcycle.


On this note, Road safety as a subject should be advocated as part of our national school curriculum. Even as FRSC has extended her tentacles to the school in respect of On Road Safety Clubs, we should not relent in actually having an entrant into the secondary and primary school curricula. Government should provide the enabling tools for FRSC in order to facilitate easy fulfillment of road safety mandate such as communication gadgets, towing vehicles, cranes, patrol cars and the likes. Besides, government should ensure that the FRSC operatives should be adequately remunerated so as to be well motivated and dispense with, with the urgency desired.