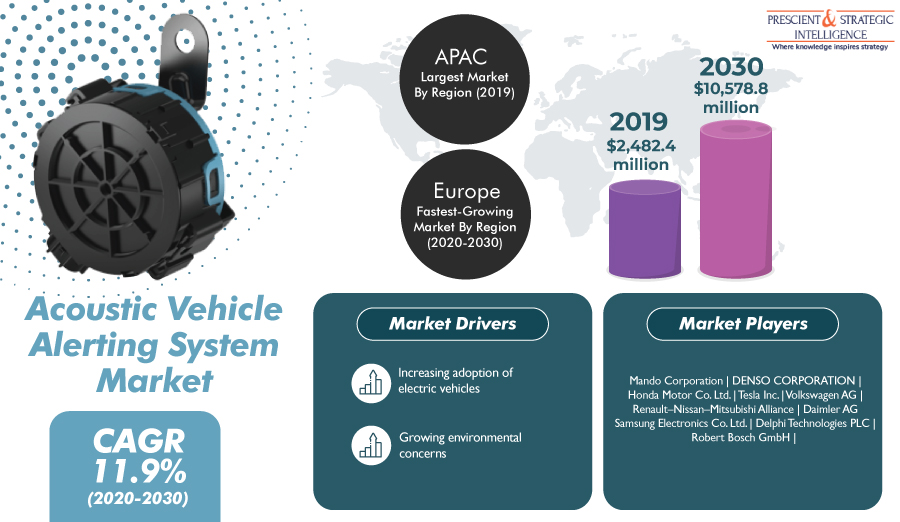 As the adoption of electric vehicles (EVs) shoots up, the production of acoustic vehicle alerting systems (AVAS) will also surge exponentially. It is being speculated that the total number of electric cars might reach around 130 million by 2030. The rapid shift to these new-energy vehicles can be primarily owed to the rising consciousness about the high air pollution levels. To control the emission of toxic vehicular pollutants, governments and international regulatory bodies are implementing policies supporting the adoption and production of EVs.

Moreover, factors such as the declining cost of several components of AVASs and introduction of new EVs will help the acoustic vehicle alerting system market progress at a high CAGR of 11.9% during the forecast period (2020–2030). For example, it is being projected that the cost of amplifiers, battery packs, copper coils, and speakers would witness a significant decline, by around 30%, by 2025 from that in 2019. In 2019, a total of 24.7 million AVASs were integrated into electric two-wheelers and cars. Additionally, the market is expected to generate revenue of $10,578.8 million by 2030.

The propulsion segment of the acoustic vehicle alerting system market is classified into plug-in hybrid electric vehicle (PHEV), battery electric vehicle (BEV), and fuel cell electric vehicle (FCEV). Among these, the BEV category will hold the largest share throughout the forecast period owing to the government incentives for BEVs and legislations for original equipment manufacturers (OEMs) and aftermarket entities to integrate AVASs in these automobiles. Moreover, the improvements in the battery technology and government policies supporting the development of these vehicles will accelerate the growth of this category, globally.

According to P&S Intelligence, the Asia-Pacific (APAC) region will be the largest user of AVASs in the world owing to the large-scale adoption of EVs in the emerging economies of India and China. These nations view EVs as a suitable alternative to conventional vehicles and an effective way to achieve energy security, as these nations are highly dependent on oil imports for their energy requirements. The region is also home to several EV and component manufacturers, including those that provide AVASs. Among the APAC nations, China registers the highest sales of AVAS components because it is the world’s leading producer and user of EVs.

The acoustic vehicle alerting system market is expected to demonstrate the fastest growth in Europe throughout the forecast period. The market is in its infant stage and fueled by government legislations that mandate the integration of AVAS solutions in electric and hybrid vehicles. The European Union (EU) has laid down an ambitious plan to phase out internal combustion engine (ICE) vehicles, to reduce greenhouse gas emissions and the dependence on oil imports. With a regulatory push from several European nations and declining prices, nearly 30% of all automobiles being sold in Europe will be electric by 2030.