Isle Of Mull: Between Sun & Sheep

Isle Of Mull: Between Sun & Sheep 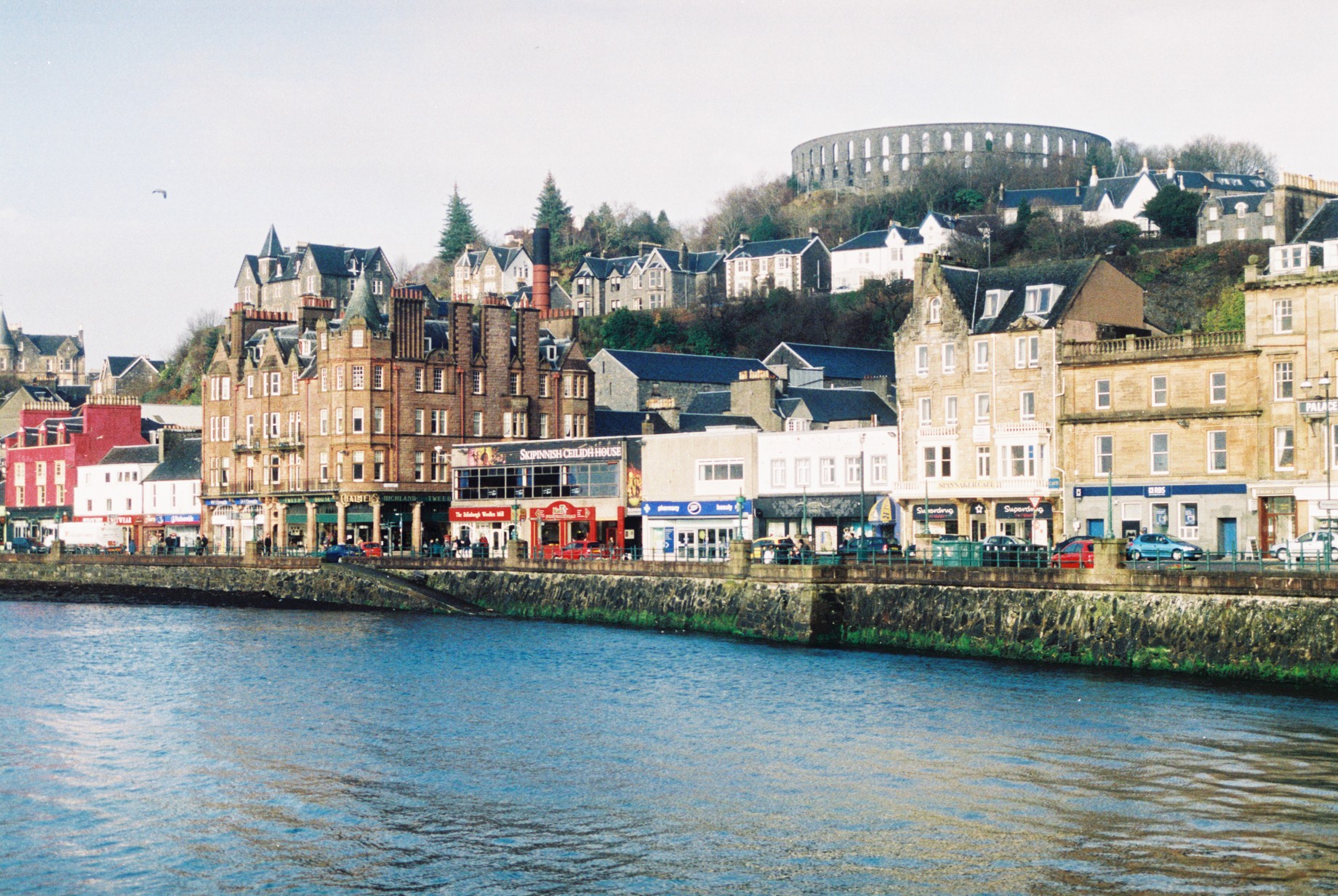 An overflowing backpack on tired shoulders is the clear sign of a successful escape from the reality of routine I had created for myself.

A routine that enticed me to look for - and “find”-, this island on the West coast of Scotland, mostly unseen by foreign eyes, yet heard of by Scottish ears.

Overflowing indeed the bag was, and as I absent-mindedly walked to the train station the thought of having over prepared didn’t sound so bad, after all Scottish weather is not known for its stability. At Glasgow Central Station my eyes probe for a red coloured words, lit up in a digital screen somewhere amongst all those trains, people and pigeons.

A three-hour ride would take us (me and the backpack, by now motive of constant swearing) to Oban, a little port town North West of Glasgow, from where ferries depart to the Isle of Mull.

There’s something about trains. As you drift into dreamlike thoughts, it carelessly slides through the tracks, taking you to a parallel world, where time stands still and the only concern is whether the windows are defogged. Meanwhile, reality simply flies out there, unreachable.

I vaguely recall arriving in Oban some hours later. The station was outdoors, and I dare to say it rained – knowing probability is on my side. An “empty” air (for the lack of a better word) surrounded the place on that ordinary grey morning, as not-so-lively bodies carried their souls down the street.

Funny enough, it was a sense of mystery, not sadness that hit me. I had come to learn, that even though good climate condition may not be the first thing mentioned when talking about Scotland, people are tough and genuine, always packing good sense of humour.

And so “depressive” turned to “impressive”, when walking down the roads of another fairy-tale-like town in the UK. Tweet That!

Even with curiosity drawing my attention to every building of every corner, the bag on my shoulders wasn’t getting any lighter. It also struck me how little I understood about how to get to the actual island I wanted to go.

Setting priorities in order I walked into the first place signposted “hostel”, and managed to roughly unveil the receptionist’s words as he rushed down the hallway to the last door, cheerfully throwing a towel and keys on my face, just before walking back to his designated post; a warm Scottish welcome.

A quick walk around town seemed like a good idea, but got crossed off my mental list as soon as drops of water gradually started falling from the sky, eventually creating puddles and consequently wet socks. It was tea o’clock anyways, and with the kettle on I sat and watched the rain from my cosy dorm room window.

Someone must’ve tied that grey cloud over Oban. The sight when opening the curtains in the morning was the same as the day before: rain and grey skies. But time wasn’t on my side, and if to explore Mull before having to get back to work I’d need to leave that morning, rain or shine. And so it was.

Ferry ticket in hand, I ran across the road to an outdoor & camping shop, walking out of there with a couple of children head torches and an improvised bin bag wrapped over my backpack, that would supposedly waterproof it.

The ferry’s quietude made the trip feel like an eternity. Not that its engine was quiet, or the bolts and screws didn’t creak, but there were just not many voices to be heard. I took the opportunity to absorb the surroundings and recall why I had come here, as the light drizzle gave a frightening look to the otherwise friendly sea.

A somewhat dull arrival (without Hawaiian flower necklaces or ceremonies) and an even quieter town carried a sense of “loss” with its chilling breeze.

Not knowing whether to go right or left, I found the answer to my question when spotting a pub further down to starboard. Tweet That!

Understanding how easily it would be to get stuck on that bar stool downing pints all day - a fun and unique experience anywhere in Scotland -, I chose to put my legs to use, shortly after being warned by the barman about the lack of cars on the island and sudden rainfalls.

But the aim was simply to find a nice and peaceful place to camp, and I figured that wouldn’t take so long.

A few kilometres down the road and both bag and rain started getting heavy. Feeling stupid for being in that situation I mentally punched myself in the face to wake up, and carried on walking, trusting the bin bag would keep my backpack dry.

Just as the idea of heading back to the cosy pub with its mind-numbing beer became tempting a car stopped ahead, signalling for me to come over. A couple of local kids just happened to come visit their parents for the weekend, being the first sign of human life I'd encountered since leaving town a few kilometres behind.

They asked me if I was there to climb Ben Mor. "Ben who?" - I said confused, but understanding they meant a mountain. I shook my head and mentioned my simple wish to find a patch of grass with good views where to pitch a tent. They said to know the perfect place, although it would require a bit more walking since their turn off wasn’t far away. It felt good to at least know I wasn’t searching in vain.

Stepping out of the car was like stepping into a new world. Caught up in conversation I didn’t even notice the weather changing outside. The sun had come out and rain stopped.

All over sudden the afternoon exhaled beauty and inspiration, with all its colours brightened and the wind livening the trees with movement. The backpack felt like a feather and the long stretch of road ahead was inviting.

If solitude and quietness is what I sought, I had no doubt found it. Sheep were my only companions on that otherwise soulless road. Time seemed to have slowed down, and the further I walked the more I understood I’d probably have to walk all that way back.

Hypnotized by the afternoon light, my right foot kept placing itself in front of the left one, until turning around a corner and spotting Ben Mor – the reason why foreigners come to this island.

A tall stretch of steep, barren land, gradually draws the eye’s attention to its cloud covered summit, 900m above sea level. This side of the island was wide open, and got hit merciless by both sea and sun light. Wind was also part of the equation, and even though I had found the place I was looking for I knew this element would be the one to put my tent to a test.

Treading along the paved road, I was followed by choppy seas and occasional beach to the right; narrow patches of grass and Ben to the left. A flat strip of dry, wind sheltered and shaded grass is what I was looking for, but it seemed like asking for too much.

Bumpy, wet, cow-poop-covered and unshaded would have to do. At least the wind sheltered part could have been ticked off by pitching the tent behind a big rock…or so it seemed.

An afternoon of pure ecstasy and natural beauty was followed by a cold, sleepless night. Tweet That!

Munching on the same package of muesli since that morning, I curled up on the only dry corner I could find, listening to a raging onshore wind blow everything but my tent away.

Rain came down in stages but hard, and all that soft green grass turned into a mini-swamp, forcing water through the material of my £15 portable house. I had given up all hope to keep my backpack dry, and instead just held my sleeping bag wrapped around a dry pair of pants for when the rain stopped.

When weariness gets to you it tricks your emotions and makes it a lot harder to deal with the situation you find yourself in.

As both wind and rain kept slamming against the tent I felt lost and helpless, wishing for nothing more than a warm bed. My eyes started to close, but kept re-opening every now and then with a step-like sound coming from the outside. By then imagination took over and fear kicked in.

Eventually the wind forced a couple of tent pegs off the ground, and I jumped to unzip the door and see what was going on outside, only to find a few sheep and cows calmly walking around as if the world wasn't ending. I would later find that simply wishing for rain to stop doesn’t actually make it stop; and that investing on a good quality tent is worth the cost.

The sun’s approach pushed those water-filled clouds away, and marked an end to that restless, wet night. Realizing that things couldn’t get any more soaked, I reluctantly put my boots on and began hiking uphill, amongst the same cows and sheep that walked around my tent all night, swerving to avoid puddles and poop. Both body and mind were numb from the intensity of the night, yet seemed pleased with the act of moving.

Poor physical conditions and common sense made me stop half way to the summit. Turning around I saw rays of light shine through cracks on the clouds, attempting to remove all dampness and bring those vivid colours back to life.

Staring at that breath-taking view I slowly realized it was all a cycle. Things begin and they end. Day in day out that place – just like any other – undergoes constant change and I, together with my poor-quality tent and heavy soaking wet backpack, had seen a glimpse of its personality, and that was worth the long walk back.”