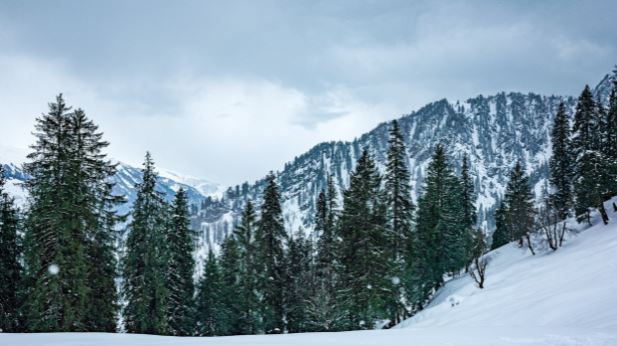 Prashar Lake is a must-see for those seeking paradise in the laps of nature, as it is nestled gloriously in Kullu Valley in the midst of the mighty Dhauladhar Ranges. The lake has its own floating island, and the lake's depth has yet to be determined. On the banks of the river, the ancient pagoda-styled Prashar Rishi temple, built in honour of the Rishi Prashar, stands tall. One of the many reasons to visit this location is for the 180-degree views of the Pir Panjal, Dhauladhar, and Kinnaur mountain ranges from the peak point, which is a visual treat. Prashar, a blue-water lake in Kullu Valley, is surrounded by the Dhauladhar ranges. Prashar Lake is a well-kept secret in Himachal Pradesh's Mandi district. The hike takes you through a beautiful forest with many rivulets. Meanwhile, since the trail passes through villages, visitors can take in the local culture. The Dhauladhar, Pir Panjal, and Kinnaur mountain ranges can all be seen from the trek.
The local temple of Prashar Rishi near the lake, with its riveting Himachali architecture, blends perfectly with the landscape for those interested in architecture. You'll come across apple orchards once you start trekking from the meadow. Make sure there are no apples to pluck. You'll cross the motorable road again after 700 metres. The path then climbs steeply for 300 metres. This is a challenging segment. After that, you'll come to a clearing.
The views from this vantage point are breathtaking. Triund, Dhauladhar Matterhorn, Kap Chuli, Man Hill, Hanuman Tibba, Sikar Beh, Mukar Beh, Manali peak, Friendship peak, Mukila, Ali Ratni Tibba, and other smaller peaks surround a beautiful valley from left to right. Take a break here for a bit. Follow the motorable road for 1.7 kilometres from the lake. Before reaching Prashar, you'll pass by a few buildings. If you've crossed these, take a left. From this vantage point, a low ground can be seen. When you hit the edge of this low land, you'll see Prashar, a beautiful lake where you can do Prashar lake camping.
Inside the bay, there is a floating round island. You may be able to see the island move if you're lucky.
Next to the lake is a lovely temple dedicated to the sage Prashar. Its architecture is distinctive and appealing.