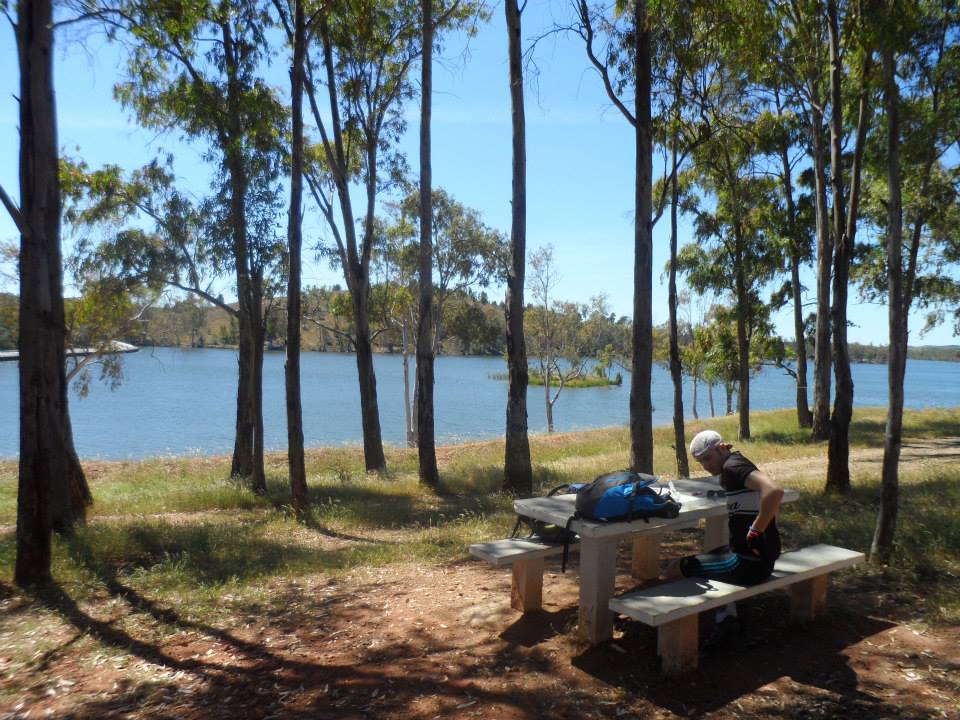 We felt pretty good waking up the following morning. The trees above sheltered us from the morning sun as we lay by our private pool and planned out the days bike ride.

Feeling ambitious, and keeping to the mantra of 100% self improvement, we casted our eyes to the town of ‘Mertola’ which we estimated to be about 70km away. It was to be our biggest ride and we didn’t want to waste any time, so we quickly packed our stuff and headed to the cafe where the old barman happily sorted us out with some fresh coffee and croissants.

There was a quick goodbye where I think I managed to combine Portuguese, Spanish and French and sound like a total idiot. Tweet That!

We set off slowly aiming not to stop until the town of Almodôvar where we would try and find some shade and avoid the mid day sun, as even by 10 o’clock it was seriously beating down on us.

This was the first day where I felt truly relaxed in my environment and began to truly take in the surroundings that we were steadily passing by. The landscape of southern Portugal is one of a tough beauty. It’s dry with rolling hills where thin rivers twist bend and sweep themselves around small villages that appear dotted on the edges and small mountains.

The villages themselves are terracotta oasis's which you roll in to re-fill water bottles, shot expressos and receive raised eyebrows from the locals.

Despite the burning sun we made good headway and found ourselves in Almodôvar by four.

We nestled down in what appeared to be in a Portuguese truckers cafe and asked to see the menu. Before we knew the waitress was placing olives, freshly cut carrots and a large bottle of red whine on the table. We were confused to say the least.

Yet before we could say anything out came a huge tray of different meat and freshly cooked chips. Needless to say the complaints were kept quiet. We ate like kings. The meat was followed by a pasta and then a bowl of fruit. The wine by a coffee and constant glasses of water. We ordered the bill feeling full but dreading the worse.

Then it came. 12 euros. I kid you not. Without knowing it we had just been introduced to the ‘Menu del Dia’ that is offered in almost every cafe throughout Portugal and Spain. It’s safe to say they became our best friends. â€¨â€¨With a half a bottle of wine and a whole platter of fried meat in our stomachs we lethargically sat back on our bikes. It’s safe to say we didn't last long.

Before we even reached the next town we had decided enough was enough. Yet the next town wasn’t a town, or a village. More just a collection of houses. The bar was also the shop. We ordered two beers but got a tin of Frankfurt’s. It was strange. Josh tried his French and they didn't respond. We stood in silence, sweaty lycra clinging to our fatigued bodies. Looking back the confused looks were probably understandable.

Later, thanks to a lovely young woman who was visiting her grandparents and could speak english, we had our camp behind an old derelict church. Our stove broke and an old woman came with freshly boiled eggs, oranges and carrots.

In need of a proper meal we woke up early, thanked the old woman for her generosity and flew down to the big town of ‘Mertola’.

After three days of constant climbing we were finally out of the mountainous region of the Algarve so were therefore treated to a luxurious down hill. Mertola itself is a hidden gem. Untouched by tourists because of its location it sits just next to the Guardiana River and holds a stunning mixture of Islamic and Christian history within its walls.

We treated ourselves to a quick breakfast, a stroll around the main square, before heading off. Our aim was the city of Serpa which was about 55km away.

If we could make it then maybe we could afford to have a day off. â€¨â€¨Yet the heat of the sun was unbearable. No matter how much water you took on your head would keep pounding. After a couple of hours of riding we were ready to throw the towel down.

To be honest I was ready for it never to be picked back up. We came across another tiny village called ‘Vales Mortes.’ There was a small cafe with a few red plastic chairs acting as a make shift terrace where a group of middle aged Portuguese men were playing cards and drinking cold beer. â€¨â€¨We collapsed next to them feeling stoned from the sun and ordered two beers

I got the map out and calculated we were still 20km away from Serpa. The sun was beginning to fall as was our hope of a day off. It was time to find somewhere to sleep.

Yet then we met Pepe. He spoke no English but after flashing the tan line on his upper thigh we understood he too was a cyclist. We showed him our tents and asked if there was somewhere we could sleep. â€¨â€¨He said Serpa and then vanished out of sight.

Ten minutes later he returned with his full cycling gear and pushing a full carbon all road bike. He clearly wanted to ride the final 20km with us. â€¨â€¨At that exact moment I didn’t like the guy. I wanted another beer and a place to sleep. I didn’t want to get back on that stupid saddle and ride for another hour. Especially with a guy who looked in shape and was riding an all carbon bike.

Yet, with almost tears in our eyes, we stepped back on our bikes and cycled as the sun was setting. Tweet That!

I do still wish it could have been me riding the all carbon though.

It was a stunning ride and he was a great guy who owned a bike shop in the city. He lead us straight to a campsite and sorted it all for us. stickman hook