How is Government Boosting Sales of Electric Vehicle Supply Equipment in India?

How is Government Boosting Sales of Electric Vehicle Supply Equipment in India? 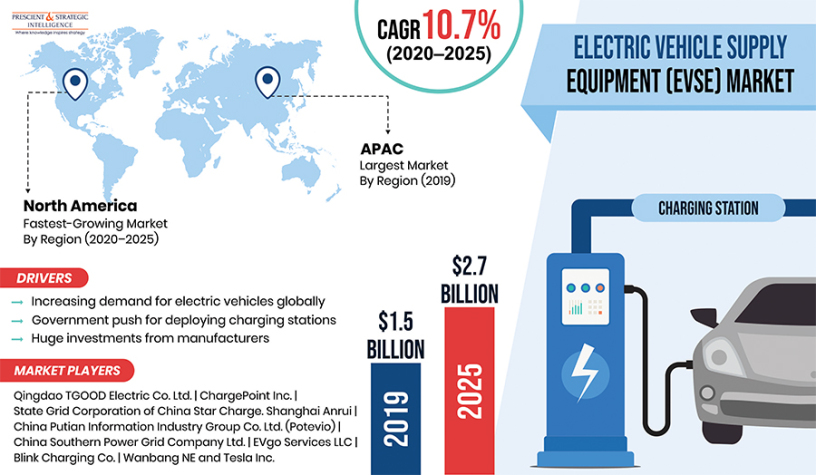 Since the last few years, the world has seen a sharp rise in the adoption of electric vehicles (EVs), on account of the rising environmental damage being caused due to the widespread usage of oil and gas-powered automobiles. In the developing nations such as India, the sales of EVs have skyrocketed in the recent years, due to the rising public awareness of the harmful emissions released from the fossil fuel-powered vehicles. The total sales of EVs in India rose from 576,000 units to more than 760,000 units from 2018 to 2019, registering a growth rate of 32.0% during that period.

According to the World Air Quality Report published by IQAir North America Inc., in 2018, “India ranked third in air pollution ratings, with 72.5 µg/m³ particulate matter (PM) 2.5 concentration”. The report also said that seven out of the top 10 most polluted cities in the world were in India. Furthermore, the report mentioned that 22 cities in India come under the top 30 most polluted cities in the world. Apart from the increasing awareness amongst the masses about environmental conservation, the government is also playing a pivotal role in promoting the deployment of electric vehicles in India.

The Indian government is providing purchase rebates, financial incentives, and tax exemptions to the buyers of electric vehicles. For example, the government launched the Faster Adoption and Manufacturing of (Hybrid & Electric) Vehicles in India (FAME) scheme in March 2015 and later revised it in 2019 for promoting the sales of battery and hybrid electric vehicles in the country. Under this scheme, the government is providing subsidies and various financial incentives to EV manufacturers and infrastructure providers, thereby boosting the sales of these vehicles and electric vehicle supply equipment in the country.

Hence, with the growing popularity of electric vehicles in the country, the Indian electric vehicle supply equipment market will exhibit rapid expansion in the future years. DC and AC are the two types of chargers used for charging electric vehicle batteries. Of these, the sales of AC chargers were considerably higher during the last few years, due to the lower costs of installation, operation, and production of these charging devices than the DC ones. Moreover, the charging costs at AC stations are much lower than that in the DC facilities, which make the AC chargers extremely popular in India.

Based on application, the Indian EVSE market is bifurcated into private and public charging stations. Between the two, the public bifurcation is predicted to demonstrate faster growth in the market in the forthcoming years. This is credited to the rising implementation of favorable government policies and financial policies aimed at creating a fast charging infrastructure all over the country. Additionally, the entry of major electric vehicle manufacturing companies such as Hyundai Motor Company and MG Motors India Pvt. Ltd. and their partnerships with numerous Indian EVSE manufacturing organizations are significantly boosting the advancement of the public charging bifurcation.

Geographically, the Indian EVSE market recorded rapid progress in the western region of the country during the years gone by, as per the findings of the market research firm, P&S Intelligence. This is attributed to the heavy government support for the adoption of EVs, especially in Maharashtra and Gujarat and the existence of major electric vehicle component and electric vehicle manufacturing companies in the region. Besides these, the high per capita income of the people bolstered the sales of electric vehicles, which, in turn, fueled the requirement for electric vehicle supply equipment and facilities in this region in the past.