Thailand Put Me in My Place

Thailand Put Me in My Place 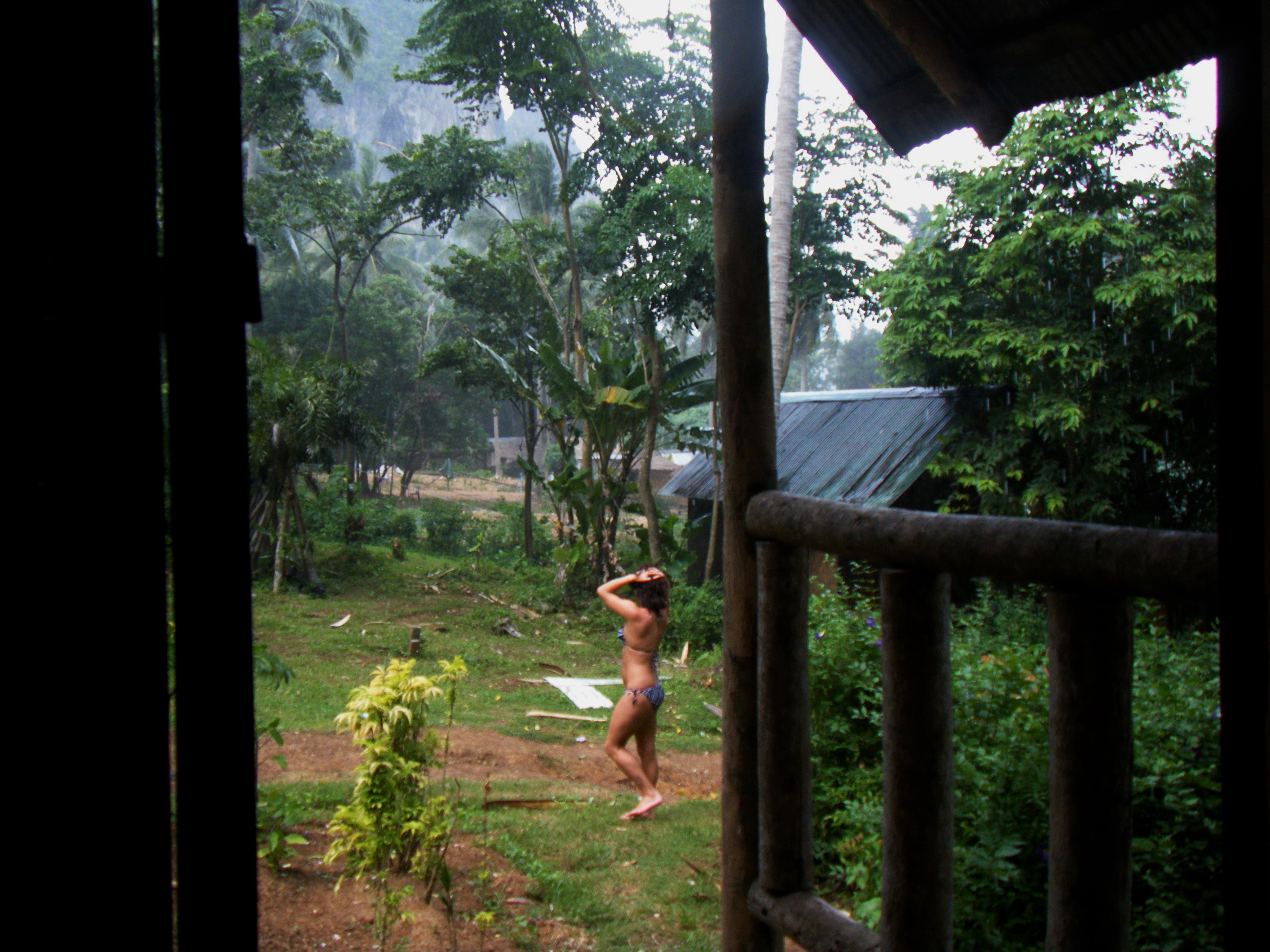 Had just two weeks passed since I was watching Sex and the City from the comfort of my tempurpedic bed in Minneapolis? Could it really have been five days from the time I was drinking too many cocktails in New York City, embarrassing myself by [wink] “whispering secrets” in the ear of a stranger? In a bungalow clear across the globe, I now sweat – I mean sat – [in my own sweat, nonetheless] – with furrowed brow and a quivering lip.

The less than reliable electricity meant I didn’t feel the soothing breeze of the rickety fan, nor see the ceiling lamp illuminate the mosquito net I had been so enamored by the night before. It also meant I couldn’t see any of the unwelcomed pests – or pets, we called them to assure ourselves of our safety – but no light with which my sister could see my sour expression didn’t mean we both couldn’t feel the lump in my throat from choking back tears.

It was Thailand. 2009. I was twenty-one. This was my first exposure to an international country since I was eleven, and that other country had been Canada.

Roughly one month earlier I had cried to my sister that I wanted to quit my job. A student in her master’s program at Columbia University, she invited me to join her in Southeast Asia for the summer. Tragically uninformed about names, much less political climates of any nations on the unofficial itinerary, I jumped at the occasion anyway and my sister and I spent the summer abroad.

Thailand.
A word I had seen on the bottom of toys and dishware.
Whether you’re laughing or appalled, I assure you: you aren’t alone.
I, like so many others, was about to undertake the western rite of passage and experience tuk-tuks, Buddhist shrines, dollar pad-thai and street vendor ice-coffee. This rite of passage is an idea I am simultaneously humbled by and wary of, but time in Thailand introduced me to people and perspectives I had never considered.

Memories documented in tattered journals didn’t just praise the food or phonetically spell out words and phrases. I was fascinated with contrasting city and countryside details, comparing what I’d always known and been comfortable with to the environment I now found myself existing in…

Journal excerpt
“Sunday June 7th, 2009 – West Ray Lei Beach
Raina and I woke up around 7am this morning and set off from our bungalow up the mountain to a lesser populated village. It is the slow season here, so it’s not as busy in all the restaurants and shops. We arrived by bus to Krabi (Grabee) yesterday morning. We had a brunch just off the port. The bus station was a bit further from the shore so we had to pay 50 baht each for a taxi-type ride. The pick-up driver smiled often, but most frustrating to me was that the fare runs at 20 baht. He brought us to the dock and we had a very refreshing breakfast. I had woken up earlier on the bus from the hot sun and I was baking in my own sweat. The landscaping was breathtaking: there are many trees, lots of the Palm, which is very nice because in Bangkok there were many buildings. I woke up Raina on the bus and we enjoyed the new view of mountains of white limestone rocks jutting out from the earth.
Banglamphu had a few main streets overcrowded with vendors selling everything from clothes to pipes to knives and food. It felt like buildings were on top of buildings, and lots of alleys. The town was very fun, but always so many people running up to you, willing to bargain lower and lower to try to convince you for their product or service. We are staying on Hat Ton Sai, which is much cheaper than East or West Ray Lei, and it’s a very nice change of pace. We stay in a bungalow for 200 baht a night. There is a queen size bed with a mosquito net, a vanity and mirror, a fan, two windows with slanted glass to let the breeze through, but there are two curtains you can clip back or draw up. Our bathroom is out the back of the bungalow; the shower has no head so it’s a stream of water that comes out of a pipe. The toilet has no lid, and no seat for that matter. It is just a porcelain bottom half. It has no tank on the back to store up water, but instead a smaller faucet (between the shower and toilet) with two buckets; one larger – we fill with water, the second bucket is smaller and you scoop and dump it to manually flush the toilet.
We had a few pets at our lovely little bungalow; most were welcome, some died. We had a snail in our shower – it was so pretty and it made me think of the old school Dr. Doolittle. Two spiders met their maker – they had white stripes on their black backs and we didn’t really know what to think of that… goodbye! Raina Leigh and I were sitting outside on our little ‘veranda’ and it was like magical dreaming. I had said a few minutes earlier that I wished they had monkeys on the island (if we’re even on an island, we’re not sure yet) but when we were gazing at the little village paradise around us, I saw this long tail about 75 feet away. It was a monkey! Hat Ton Sai is so wonderful. They have little gardens scattered among bungalows and it’s more of a localist colony feel than East & West which are full of resorts with pools and minibars where you can charge whatever to your room.
We got situated at the bungalow after hunting down a good price. I was a little crabby at first because I was so hot from the trek and I was a sweaty mess. The electricity is very unreliable here so the light and fan didn’t turn on. I took a cold shower and started to really get excited about roughing it. A minute or two after my change of heart, the light and fan clicked on… five minutes later they went off again, but it was pretty encouraging none.the.less.”

By “I was a little crabby,” I mean I didn’t know how to deal with the culture shock of Thailand. Our Lonely Planet had expertly tipped us off to how much we should expect to pay for taxi rides, so I felt like I was being taken advantage of. Though I voiced disapproval for room-charging resort stayers, truth be spoken: I was extremely outside of my comfort level and had never been so inconvenienced by a lack of electricity in my life. All I could think of was how much “better” things were when I was eating popcorn and drinking wine in my luxurious, albeit working-class American life, watching cult favorite tv shows in my bedroom. Quite literally, Thailand is a place that helped me learn to dance in the monsoon, er.. rain.

Occasionally I find it is easier to ridicule ourselves than to recognize the struggle of growing into our personhood. Preparing for this blog post, I spent time reading old journals from my travels, and this snippet brought tears to my eyes… I often criticize how unprepared I was at twenty-one to be exposed to the “real world.” At a time where only drinking and dating mattered to me, a respite occurred, and my passion for education by travel began to take root in my heart, through inscribed tender words on a time-weathered page:

Friday June 5, 2009 – New Joe Guesthouse lobby
“When we first came to Banglamphu Neighborhood, it was strangely familiar, like we had stumbled upon it by subway or bus or too many wrong turns in the streets of New York City. In reality, I am halfway across the world, on the complete opposite side from familiar. It’s very odd to be somewhere where your native language is generally not understood. It’s been nice to have people smile; it’s encouraging, and it’s unspoken kindness.”

This journey for appreciating the world through travel was just beginning, but sharing smiles with the people of Thailand was just one of many puzzle pieces that snapped into place in my heart. Another treasure? Being put in my place for crying about unreliable electricity when much of the world deals with it daily. Little did I know that the next country I visited actually scheduled power outages during the day in order to maintain it for longer periods at night.

I couldn't agree more! Thailand is mad, take a look at my version of Thailand in my blazing Bangkok, or hustle and bustle or one of my other blogs! I'd really appreciate the support x

I really like the rawness of this post! I'll be travelling to Thailand at the end of this year. I'll keep in mind what I have just read, your post is definitely an eye opener.