Spitting up blood at the Great Barrier Reef

Spitting up blood at the Great Barrier Reef 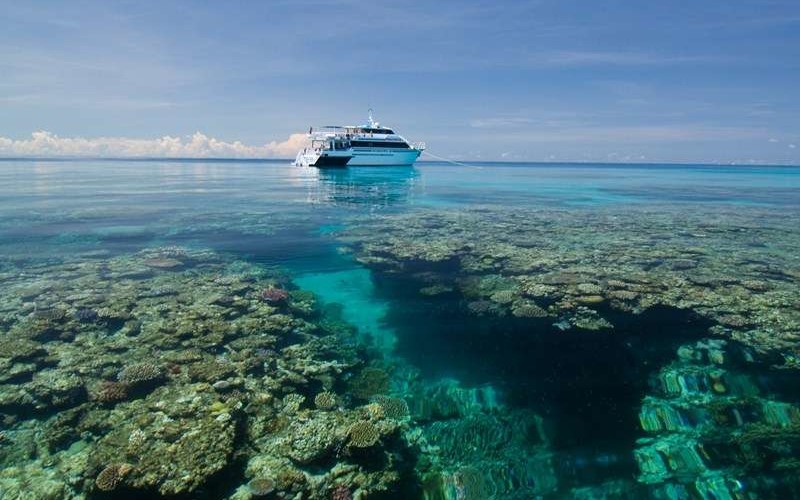 After thirty hours of travel, I landed in the sun-baked country of Australia, Cairns Australia to be exact. Grabbing my bags from the carousel and stepping outside to grab a cab feels like you are a solar panel in a dessert. Nevertheless, I was heading to have the time of my life, I was going to scuba dive the Great Barrier Reef, jump out of airplanes and swim in famous waterfalls!

Arriving at Gilligan's Backpacker Hotel aka "the party hostel" it was time to drink a beer and unwind at the pool. The hostel was great, a little dead at the time I was there but met some great English mates! The pool was big, the bar was stocked and the sun was out, what more could you ask for?

The next day was an early one, packed into a little van we were off to the dock where a boat was waiting to take us to the Great Barrier Reef! Ten minutes into the boat ride I was happier than a tornado in a trailer park that I wasn't drunk last night!

Everyone who had a big night out was running to the bathroom to throw up last nights regret. Some people put their head in their lap and never woke up until we were back on land! Incredible, they spent all that money and slept, I guess it's better than the people who didn't even try to get on the boat that morning.

The 45-minute boat ride was coming to an end and we were getting ready to suit up! I was in a group with three other people and one smoking hot instructor!

Our first dive was just getting accumulated breathing compressed air, wearing scuba tanks and dealing with the pressure. We traveled about ten minutes to a different spot where we would be diving much deeper and longer!

I was with the same group for this dive but the results were much different. The first was a simple dive but on the second, more intense dive people couldn't make it. After a few meters deeper than the first dive, five out of the eight people were shooting to the top because they couldn't deal with the pressure. It came down to just the instructor, myself and one other guy which was nice because we were all pretty good and didn't have to wait for any slower divers.

The Great Barrier Reef is absolutely breathtaking! The colors of the fish will blow your mind, all of the little sea creatures blend in so magically with their surroundings it's truly an amazing experience!

Diving further and longer I can start to feel the strain of the pressure on my body. There was a point where we dived deeper than we ever have and about a quarter from the ocean floor a sharp pain pierced the top of my nose stopping my descent and making me want to jolt to the top!

Realizing it's my sinuses that are giving me the pain, probably from not equalizing correctly, I knew I could either call it quits or keep pushing. Thinking about all the money I spent it was a pretty easy decision. Diving deeper and deeper the pain increased to a point I almost couldn't take. A little deeper and I feel a pop right in the socket of my nose and right eye making me stop swimming for a moment.

Oddly feeling a little better after the pop I decided to keep pushing and just enjoy this beautiful reef through the pain. Scuba diving was over and I was taking off the gear on the boat, thinking I had a little snot in my throat I hocked a loogie off the side of the boat only to find it was not snot, it was a lot of blood I was spitting up!

Obviously a little worried I took myself to the hot instructor who was very informed and talked me through what was going on and ultimately told me if it got worse to let her know. Luckily everything got a little better except for the sea sickness that started to creep in. With everything that was happening, I was ecstatic to see land and get off that boat!

That evening was an early night because tomorrow morning I was going Sky Diving!

This trip took place sometime in February 2013.. how time flies :)

Add BSmyth to your subscriptions feed

Great post! I'm in Oz at the moment and I'll be ending my trip in Cairns!

That sure was a memorable adventure!! Thanks for sharing!