History and Culture of Agra

History and Culture of Agra 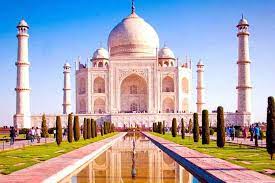 Agra city is very rich in culture and architecture having more than 70 well known and unknown tourist places in Agra. You can explore places near Agra and things to do in Agra. Book your Top Agra Sightseeing Packages you can cover Taj Mahal, Agra Fort, Itmad-Ud-Daulah or Akbar's Tomb easily and can also spares some times for shopping. Those who dream of visiting the Taj Mahal and other Agra highlights can choose a variety of Agra Tour Packages with us which range from single day Agra tour to multi day tours. As far as activities are concerned there various options like walking tours, visiting the Elephant Rescue Centre, visit the Missionary of Charities. If you are interested in Wildlife you can make excurcion tours from Agra for the Chambal Sanctuary, Bharat Bird Sanctuary, Patna Bird Sanctuary etc.

History and Culture of Agra
The ancient land of Brija or the land of Krishna extends from Kosi kalan to Bharatpur in Rajasthan. From Bharatpur to Dholpur this encompasses a large area. In this large area known as brij kshetra (land of brij) on the banks of river Yamuna with four ancient shiva temples on four sides of the city is the city of Agra. It was in ancient times called the Agravana or the forest of Agra a name derived probably from king Agra- sen and his capital agroha. Being a part of brij the primal language of the rural area is brij it is slightly different from standard hindi and is known for its rural linkage . The city built between the four shiva temples (Balkeshwar-mahadev, Rawli-mahadev, Rajeshwar-mahadev, Mankameshwar-mahadev).

Agra During Delhi Sultanate and Mughal Era
This area came in news during the times of Sikandar lodhi when on the undulating ravines of river Yamuna a mud fort was re resurrected. This mud fort was known as Badalgarh, Babur coming from cold region came over here, he faced the extreme heat of this region and he tried to tackle the heat by making a garden on the banks of river Yamuna. This eloquent garden and its precincts were given the name of “AAram Bagh”. Babur has mentioned how hot india is in his memoirs, probably encouraged by these emperors the local agriculturists started growing the musk melons, water melons, cucumbers, Even today in the hot summer month before the onset of monsoons the Agra markets are flooded with the produce of water melons, musk melons, cucumber which are a great respite from the fuming heat and the hot wind loo blowing in this region.

Akbar started the renovation of badal garh fort, the grand Agra fort you see today can be attributed to the king Akbar. It was during the reign of king Akbar that Agra became the centre of attraction, not only Agra became the political capital of India it also became the centre of trade and business, culture etc. Akbar was a great visionary not only he took the flag of mughal empire to distant parts of india he had a long fore sight. He called upon people from different parts of India to come and settle in Agra. The Baloch people of Balochistan came and the area where they settled was called Balloch pura though these Baloch people mostly have left Agra now but the area continuous to be called Balloch pura.

Influence of Punjabi Culture in Agra
The business man of Punjab the khatri people were welcomed by king Todarmal who was a courtier of king Akbar he inhabited the area with khatri people this area was called “ Maithan”. Remember the Sikh Gurus were also born off the khatri lineage. One of the Sikh Guru Shri Guru Tegh Bahadur Sahib ji visited the maithan area , a famous sikh temple stands there today commemorating the visit of the Guru Sahib.

Agra as a Cosmopolitan City
The migrants from different parts of India brought their culture and culinary sKills to Agra. Big Bazaars (markets) came into existence during this era and Agra became best sought after place for the Bania caste. Even today most of the elected representative from Agra belong to the Bania caste . The business men (Baniya) caste is a majority in Agra. These people love food which is fried ,deep fried kachories, bedai,jalebis are favorite snack and breakfast of Agra. Even today the city of Agra is a city of retailers, a city of small shopkeepers, a city of businessman, Agra is a centre of trade for pharmaceutical products.

Islam and Christianity in Agra
Agra also has a large Muslim population. The best thing about Agra is that Agra is a city of “sulahkul” where different religions abide together, Akbar called upon the Jesuit priests and he was quite impressed by their religious ideology. The first Christian church was built by king Akbar at Agra in seventeenth century. The same church was demolished and later rebuilt. Grand Churches built by the Armenian and Portuguese traders still stand tall in Agra. So rightfully Agra is a secular city with sikh temples , Grand Muslim mosques , Jain temples, Christian churches, Parsi anjum all being there. The area around Agra is fertile with wheat being an important crop. The farmer produce a lot of milk and the city makes delicious sweets based on milk. You can savour a rich and long list of Indian local sweets made by the trained famous Halwaais of Agra. In old city since Mughal times an alley known as” Seth Gali” the lane of sweet meat makers exist, the localities love the locally made “Mithais”.

Famous Urdu Shayars of Agra
During the Mughal times the language of the elite and the official court language was “Persian”. A new language born off the confluence of the Hindi and Persian known as Urdu was not only born but it was enriched in the royal courts of the great Mughals. “Miyan Nazeer”, “Mirza Ghalib” the great poets of Urdu were born in Agra.

There came a time when the capital was shifted to Delhi, Agra lost its coveted place, still as time moved Agra too moved ahead. As the English came Agra again became a centre of education ,Agra University was established in 1827 much before the University of Delhi, At one time Agra University was the only University in entire north India, colleges also came into existence Agra college an institution older than Agra University (1823) still has thousands of students.

The nineteenth century saw a lot of missionary activity in Agra not only they constructed grand churches but missionary schools like St’ Peters College, St’ Patricks Junior College and a dozen more missionary convent schools came into being. The archdiocese of Agra once was the only one in north India, Agra is seat of Archbishop (Both Roman Catholic Church and Protestant Church). Christianity has a large following in Agra, the Christmas is celebrated every year not only by the Christians but by all the inhabitants of Agra a mela (Fete) is organized at Sadar Bazaar on the occasion of Christmas.

After Agra Indian Independence
1947 brought hordes of refugees to Agra who also brought a new culture to Agra, the influence of Punjabi culture today can be seen in Agra as Punjabi culinary delights are sold on the streets of Agra. Choley Bhaturey are a rage. Kala Mahal an area is today famous for Sindhi Culinary delights like “Daal Pakwaan” Sindhi Sweets made by Sindhi Halwaais.

Today as India ushers into the new era Agra is a world famous city. its past today beckons millions of tourist every year who come and enjoy the timeless beauty of the Taj Mahal. These tourist not only enjoy the beauty of the Taj Mahal but they enjoy the age old very famous delicacies of Agra. The Bedai Kachori breakfast, the chat at the Seth gali, Bhalla, Tikiya. Biryani, Haleem, Nahri, the non vegetarian delicacies so profound and enjoyed over the decades.