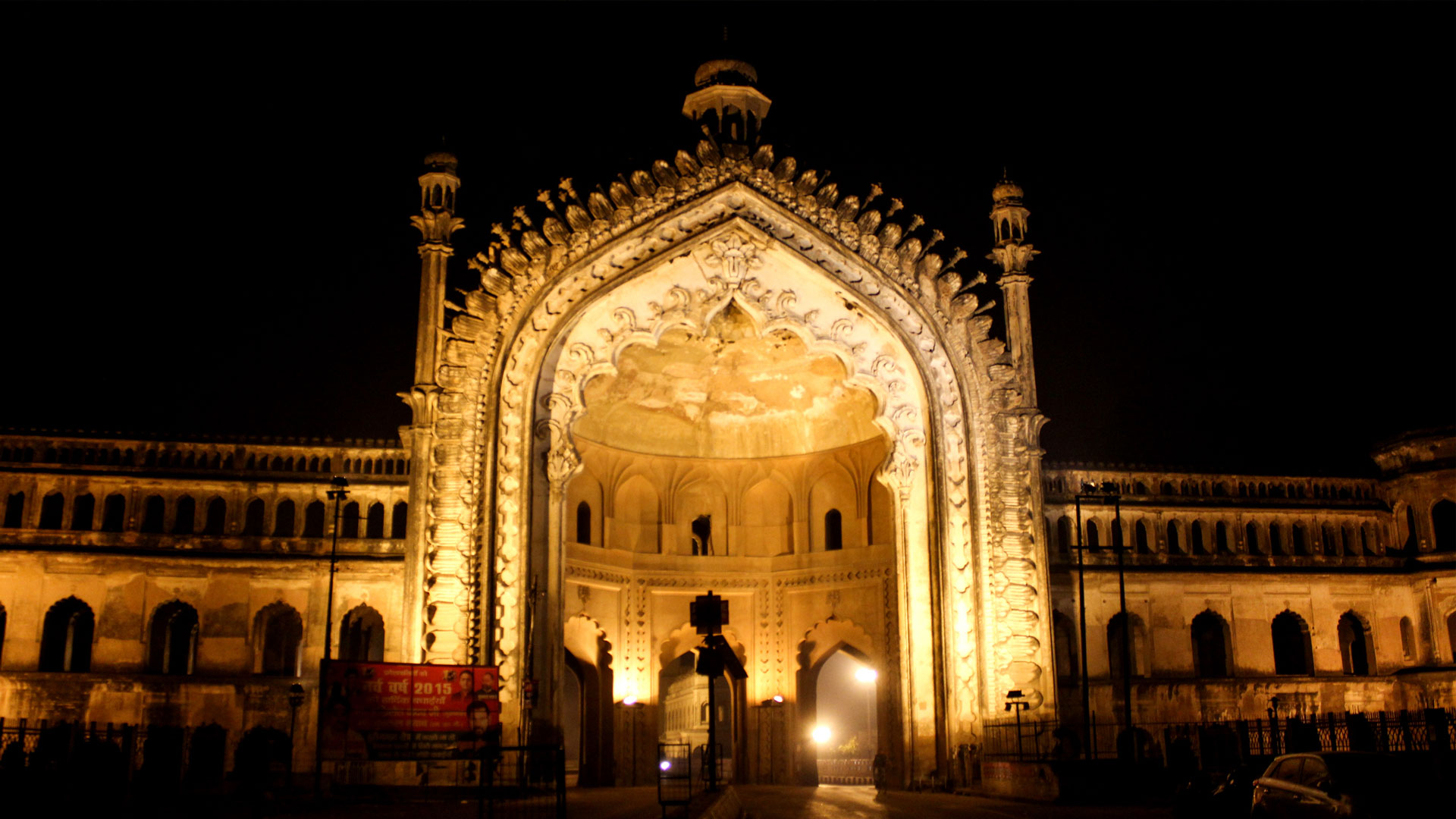 Lucknow is the capital city of Uttar Pradesh and it has always been a multicultural city. Courtly manners, beautiful gardens, poetry, music, and fine cuisine patronized by the Persian-loving Shia Nawabs of the city are well known amongst Indians and students of South Asian culture and history. Lucknow is popularly known as the The City of Nawabs.It is also known as the Golden City of the East, Shiraz-i-Hind and The Constantinople of India.

Avadh is claimed to be among the most ancient of Hindu states. According to popular legend, Ramchandra of Ayodhya, the hero of the Ramayana, gifted the territory of Lucknow to his devoted brother Lakshman after he had conquered Sri Lanka and completed his term of exile in the jungle. Therefore, people say that the original name of Lucknow was Lakshmanpur, popularly known as Lakhanpur or Lachmanpur.

Taking a descent through the mists of time we alight upon Ayodhya again in the record books of the Emperor Akbar. It is a prodigious descent in time -from fifteen centuries before the Christian era to fifteen centuries after. Incredibly though, not much is known about the history of Avadh during this time. We know that after the conquest of Kanauj by the Afghans at the. end of the twelfth century, Avadh submitted to the Sultan of Ghazni, and so became part of the empire of Delhi. Avadh then as- serted its independence for a while under a Muslim ruler, but he was over- thrown by Babur, and Avadh became a subah or province of the Moghul empire.

As the Moghul power declined and the emperors lost their paramountcy and they became first the puppets and then the prisoners of their feudatories, so Avadh grew stronger and more independent. Its capital city was Faizabad.

Of all the Muslim states and dependencies of the Moghul empire, Avadh had the newest royal family. They were descended from a Persian adventurer called Sadat Khan, originally from Khurasan in Persia. There were many Khurasanis in the service of the Moghuls, mostly soldiers, and if successful, they could hope for rich rewards. Sadat Khan proved to be amongst the most successful of this group. In 1732, he was made governor of the province of Avadh. His original title was Nazim, which means Governor, but soon he was made Nawab. In 1740, the Nawab was called Wazir or vizier, which means Chief Minister, and thereafter he was known as the Nawab Wazir. In practice, from Sadat Khan onwards, the titles had been hereditary, though in theory they were in the gift of the Moghul emperor, to whom allegiance was paid. A nazar, or token tribute, was sent each year to Delhi, and members of the imperial family were treated with great deference: two of them actually lived in Lucknow after 1819, and were treated with great courtesy.
Achieving a certain degree of independence from the Moghuls in Delhi did not, unfortunately, mean that the Nawabs could rule entirely as they pleased. They  had merely exchanged one master for another. The British, in the form of the East India Company based in Calcutta, had long looked with predatory eyes at the wealth of Avadh. Excuses for interference in the province were not hard to find. The most catastrophic from the Avadh point of view came when Shuja-ud-Daula invaded Bengal, and actually briefly held Calcutta. But British military victories at Plassey in 1757 and Buxar in 1764 utterly routed the Nawab. When peace was made, Avadh had lost much land. But the enemies became friends, on the surface anyway, and the Nawab Wazir was extolled in the British Parliament as the Chief native allay of the East India Company in all India.

The Nawabs surrendered their independence little by little over many years. To pay for the protection of British forces and assistance in war, Avadh gave up first the fort of Chunar, then the districts of Benares and Ghazipur , then the fort at Allahabad; all the time the cash subsidy which the Nawab paid to the Company grew and grew.

In 1773, the fatal step was taken by the Nawab of accepting a British Resident at Lucknow, and surrendering to the Company all control over foreign policy. Soon the Resident, however much he might defer ceremonially to the Nawab, became the real ruler.

Asaf -ud-Daula, son of Shuja-ud- Daula, moved the capital from Faizabad to Lucknow in 1775 and made it one of the most prosperous and glittering cities in all India. Why did he move? On a whim, it is said, because he wanted to get away from the control of a dominant mother. On such a thread did the fate of the great city of Lucknow depend!

Nawab Asaf-ud-Daula was a generous and sympathetic ruler, an inveterate builder of monuments and a discriminate patron of the arts. He built the Bara Imambara with its intricate bhul-bhulayya and adjoining mosque, primarily to create employment for his subjects during a time of drought. The Rumi Darwaza also testifies to his architectural zeal.

His son, Wazir Ali, was the one who most regretted his grandfather’s ac- ceptance of a British resident at Lucknow. In 1798, the Governor-General removed him from the throne, on the excuse that there was doubt as to whether he was a true son of Asaf-ud- Daula, but more probably because he was displaying tendencies to independence. They put Asafs brother, Sadat Ali Khan, on the throne. Sadat Ali Khan, though economical in fiscal management, was nevertheless an enthusiastic builder and commissioned many grand palaces, including Dilkusha, Hayat Baksh and Farhat Baksh, as well as the famous Lal Baradari. Hereafter the dynasty had to look to Calcutta rather than to Delhi to settle the succession.

The assassination of a British Resident in 1798 in Benares by the deposed Wazir Ali gave further excuse for interference, and Lord Wellesley (brother of the Duke of Wellington) was just the man to exploit it. By the treaty of 1801, the Nawab had to give up his own army, and pay heavily for a British-led one in its place. The southern doab (Rohilkhand) was ceded, and the remainder of the district of Allahabad and other areas became part of British India. In thirty years, Avadh had lost half its territory to the British.

The Nawab demanded in return for these concessions that he should have a free hand in governing his remaining territory, unchecked by the advice or interference of the British. But in this, he was badly handicapped by the fact that he had to rely on British troops to enforce his orders. Wellesley had another trick up his sleeve: a clause of the treaty by which the Nawab under- took to establish a system of administration “by the advice of and acting in conformity to the counsel of the officers of the Honourable Company” which should be conducive to the prosperity of his subjects. It seemed a harmless clause, but was to be the means by which the British eventually annexed Avadh.

Thus, from 1819 onwards, things ran their course in Avadh. Sadat Ali being gathered to his fathers, Ghazi his son, sat on the musnud, the throne, and took the cognomen “ud-Din”, implying Defender of the Faith. He was formally invested with the title of King by the British, though ironically the proclamation of kingship coincided with a period of almost complete dependence on the British. He lent two millions of rupees to the British feringhee for the Nepal War, and at its close got the Nepalese Terai ~ a marshy forest extending along the foot of the Himalayas -in liquidation of half the debt. Some might have thought it a poor bargain, but in fact the Terai eventually produced some very valuable timber.

Ghazi-ud-Din was a good monarch, responsible for much building and public works of all kinds, and he paid due attention to the administration of justice. He built the Mubarak Manzil and Shah Manzil as well as Hazari Bagh, in whjch he introduced Lucknow society to the sport of animal contests for the first time

However, his son Nasir -ud-Din who succeeded to the throne, had an attachment to the English, not founded upon those things the English would like to be admired for -justice, liberty, democracy -but upon their dress, their eating habits and, more unfortunately, the drinking -habits of the more disreputable element of English adventurer with whom he surrounded himself.

Nasir -ud-Din, despite such a temperament, was a popular monarch, who was responsible for the construction of an astrological centre, Tarunvali Kothi. Equipped with sophisticated instruments, it was entrusted to the care of a British astronomer. When he died there was another disputed succession and the British insisted on Muhammed Ali, another son of Sadat Ali, being enthroned. Muhammed Ali was a just and popular ruler and under him, Lucknow regained its splendour for a brief spell. He was however sorely troubled by rheumatism. He died in 1842 and his son Arnjad Ali succeeded, a man more inclined towards matters religious and spiritual, leading to the neglect of governance. He was succeeded by Wajid Ali Shah, poet, singer, avid patron of the arts and lover of Lucknow. Of him it was written, “He is entirely taken up in the pursuit of his personal gratifications. He has no desire to be thought to take any interest whatever in public affairs and is altogether regardless of the duties and responsibilities of his high office. He lives exclusively in the society of fiddlers, eunuchs and women: he has done so since his childhood, and is likely to do so till his last.” (‘The Private Life of an Eastern King’ by William Knighton.)

This portrait of Wajid Ali Shah was used to justify British annexation of Avadh. If the charges of mismanagement levied against Wajid Ali Shah were true, the British were as much responsible for this as the Nawab. They were more in control of the administration and finances of Avadh since the 1780’s than the Nawab. In addition, Avadh had been impoverished by the incessant cash demands of the British on the Nawab.

The excuse at last came for the British to invoke that clause of the 1801 Treaty. And the Governor General in 1856, Lord Dalhousie, was just the man to do it. Avadh was annexed, Wajid Ali Shah shipped off to virtual imprisonment in Matiyaburj in Calcutta and, though this was not on the British programme, the stage set for the greatest rebellion to date against their power in India.

One of Wajid Ali Shah’s wives, the Begum Hazrat Mahal, remained in Lucknow, and when the Mutiny came in 1857, she put herself at the head of those fighting for freedom.

The Begum never did surrender, she died in Nepal in 1879.