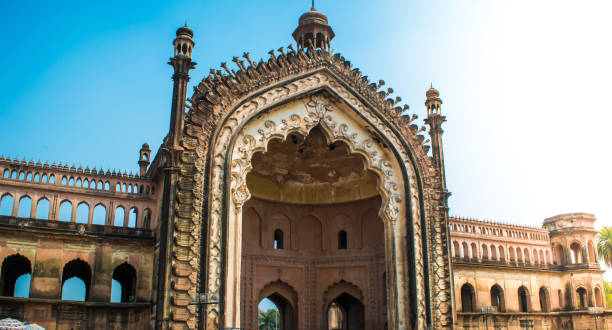 The famous Rumi Darwaza is a striking gateway standing tall at sixty feet tall in the old city of Lucknow. It lies between the Bara Imambara and Chota Imambara exhibiting ancient Awadhi architecture. Built by Nawab Asaf-ud-Daula, it is also known as the Turkish Gate because it is modelled after Bab-i-Humayun gateway in Turkey. Rumi Darwaza is said to be influenced by a similar gateway which stands in present-day Istanbul in Turkey.

The creation of Rumi Darwaza has a very charitable reason behind it. When famine struck North India during 1748, the then Nawab of Lucknow came up with a plan that would feed his countrymen as well as give him something to cherish and be proud of. As per the plan, the Awadhi workers built the great Rumi Darwaza for him, in exchange for everyday meal.

Rumi Darwaza in the heart of Lucknow looms over the busy everyday traffic of Lajpatnagar like an old guardian angel that has seen the city rise and fall. Through the arch of the Rumi Darwaza runs roadways to both sides and they remain busy, crowded and cacophonous all day long. The rush of vehicles and the brunt of time have weakened it, but it still stands ever strong and majestic, looking even more resplendent when lit up at night.

Now a landmark for the city of Lucknow, the great Rumi Darwaza was once built keeping a very noble and thoughtful idea in mind by the then Nawab. In 1748, the Awadh region along with a large portion of North India was going through a terrible phrase of famine and depression. Nawab Asaf-Ud-Daula thus decided to set on certain construction projects as a food-for-work campaign which would generate employment for the common people and thus help the economy as well people's standard of living to get better a bit.Rumi Darwaza. It did not take long to build the structures. Within two years, the fruit of labour was gracing the gateway to the Old City of Lucknow which was quite a feat given the critical situations.

The top of the Rumi Darwaza at 60 feet height has a small octagonal place which is called the chhatri or umbrella – it looks over both sides of the gate from the absolute top. A staircase leads up to it, or so it did in the old days. So it can be assumed that this was either used for vigilance, or to light up the gate with a big lantern at night, which is the more popular history.The whole structure of the massive door is decked with ornate patterns of flowers and leaves and other detailed designs that speak explicitly of the great craftsmanship of that time.It has four minarets at four corners, and it stretches out on both sides taking up almost the shape of a building rather than a gate.