Train ride to the South of India

Train ride to the South of India 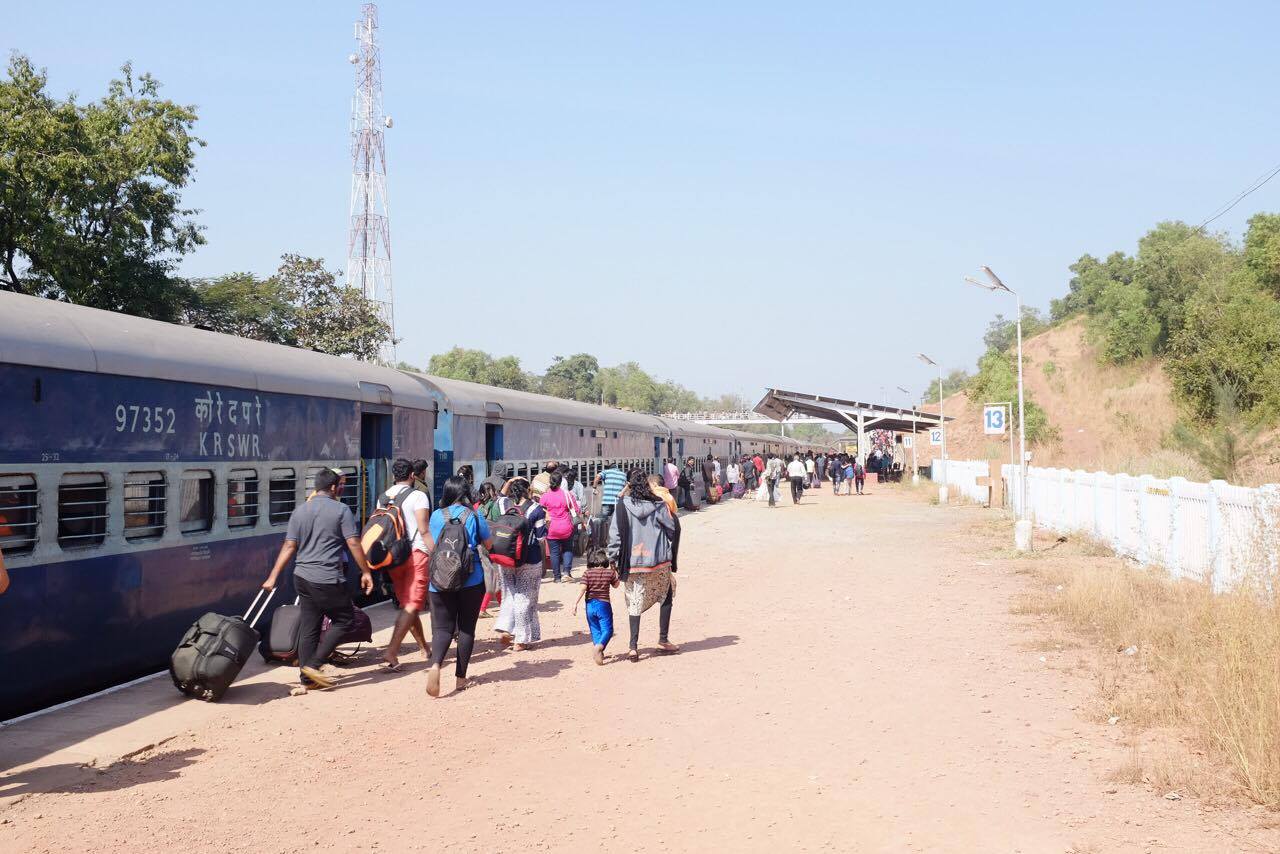 Did you know that the pressure of building trains in India came from London in the year 1840. The building of the railways has a vast impact on its economic,political and military front during that time. And today, due to the vast network of railways in India, it has tied a big country like India closer than ever before.Do you have an idea how big of a country India is? Then you would know how important to them train travel is.

On our 2nd day in Mumbai, Rob and I decided to book a train ticket going to the South. We booked 2 non-airconditioned sleeper in the Mangalore Express from Mumbai going to Margao (Cost:420 Rupees each;5,49 Euros,6,45 USD). It was 614km away which will take 10 hours and 50 minutes (so they say). I was thinking at that time if only the Philippines has this kind of transportation then travelling would be so much cheaper and easier.

Come join our train ride and let us take you to the South of India.

Our train will leave @22:00, instead of waiting for a long time in the train station, we opted staying for a few hours in the hotel and paid half of the rate(not bad). We took a cab to the train station.Make sure that it is a metered one.It costs us 75 Rupees from the hotel to the CST station.Patience is a virtue when riding a train in India. The train is usually late.Do not be surprised when you see people running and pushing to get on the train. It is a common sight in an Indian train ride. If you don't have enough time,or have some flights or bus rides to catch,I do not recommend the train ride in India except for the luxury trains of course. Indian railway operates a number of luxury trains which cater to various tourist circuits throughout India. The luxurious trains are named as Fairy Queen, Heritage on Wheels,The Indian Maharaja and Splendor of South. These trains will give you a life time experience of true Indian royalty.

But if you want an adventure and you have time to spare and want to save some Rupees, try riding an ordinary train in India.It is one way to enjoy the scenery India can offer. But be warned it was very cold and crowded inside the train. When the train stops at a station many people go inside even without a ticket. You can see passengers sitting and sleeping on the floor. So when you go to the toilet you have to pass through so much crowd.If you get hungry, they have chai and some snacks on board.Although I suggest you bring some snacks and water with you. The ride was ok, cold and noisy at times, expect that you will not arrive at the estimated time reflected on your ticket. We also met fellow travellers too on the train.One was a couple from Europe who was already travelling in India for two months. A Chinese guy who recently retired and doesn't look like he's 63 years old,he was also stopping at MArgao on his way to Benaulim. And a German student in Mumbai on his way home to Goa.

I would say I was a bit caught off guard on my 1st Indian train ride.Although,it was definitely an experience worth sharing.

Photo: @the CST in Mumbai with our night train

We arrived at the Magdaon Railway Station in Margao, Goa's biggest and busiest train station.All train stops in Margao.That is why it is more common as a transit stop than a tourist destination to travellers, who usually head to Palolem down south or Benaulim (where we stayed for two nights before another train ride to Gokarna) or Colva., 6kms away from the station.

Photo:Sun, Sand and Sea (Rob was so excited to go for a dip) @Benaulim

Photo:Vegetable and Fish Thali (Thali:a set meal at an Indian Restaurant), a little bit weird for my taste.

Opposite the guesthouse we were staying is Rosario's inn and restaurant. I could not forget the place because this is where I tasted the most delicious Pork Vindaloo I had in India.

Pork Vindaloo
This is said to be the most sensational and memorable Goan dish. 'Vin' stands for vinegar and 'ahlo', pronounced and written as 'aloo', means garlic. Chilis, ginger, garlic and cumin make the luscious red masala which is mixed with vinegar laced pork and cooked in a fiery red gravy till it's flaky and tender.

The restaurant at Rosario's inn is operated by an Indian couple. When we sat down and look at the menu,I was surprised when the husband said,KABAYAN!!!He was actually an Indian who worked in a cruise ship before and he has a lot of FIlipino friends, so he knows many Tagalog words.I could not forget him and of course the pork vindaloo. I tasted few of the vindaloos in India, but I really loved the one they have. I wished we had the time to go back there before flying back home, but we didn't.

Another train ride and off we go to Gokarna,Karnataka India.