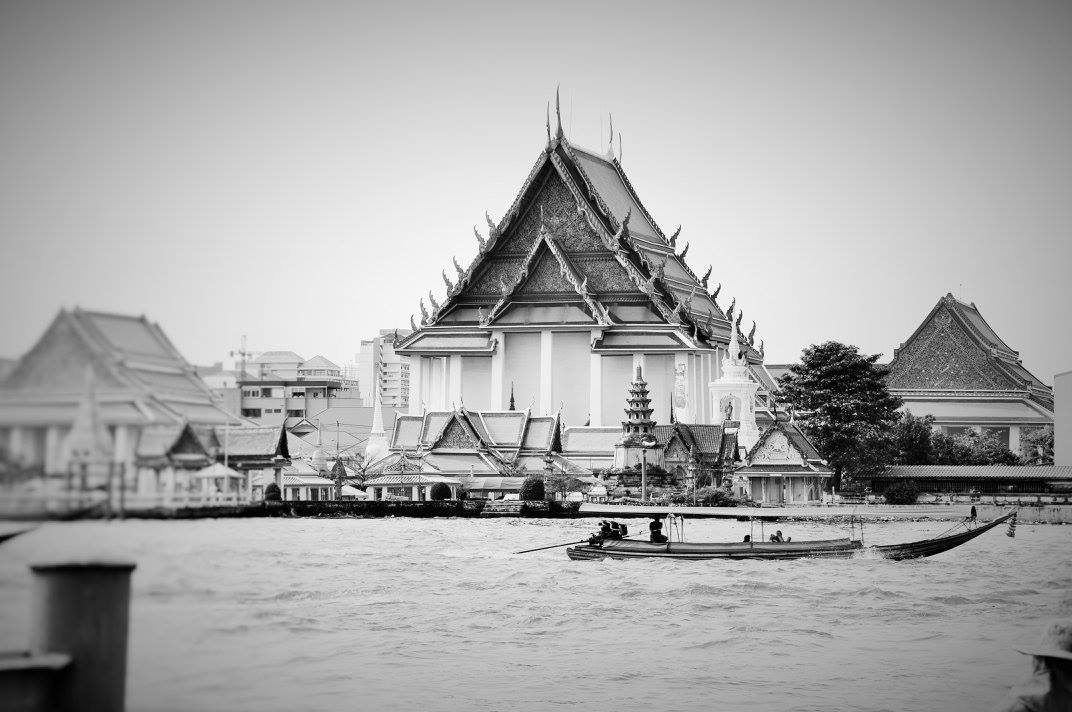 Starving after not having had anything to eat since we left the UK over thirty hours ago; Our first and foremost priority was finding something tasty to eat! (Standard right) Google said a Tesco's was near-by, but a Tesco's in Thailand was never going to be the same as your standard supermarket Tesco's in the UK. Fooled by our mouthwatering hunger we hooped in a Tuk-tuk and went to Tesco's. I was excepting a full Gluten Free, Dairy Free and organic isle, but the supermarket assistants almost laughed when I requested them to show me where the Gluten free bread was... This was going to be a struggle, I'm allergic to Gluten and Dairy so being in Thailand wasn't going to be easy... Duncan went straight in for the basics bread and butter and we left.

Hunger was something over the course of our week in Bangkok we got used too, sadly! I began eating things I knew I couldn't stomach but had no choice too...

Back to the culture -
We ventured out from our hotel on foot, ignoring all the heckles and harassment of people on the streets wanting to sell you tissues, taxi rides and anything from wooden doors to street food. Be warned in Bangkok being white is a fascination; particularly if like me you have light hair to match. After walking for around ten minutes and sprinting across the craziest road, with traffic flowing in every direction, tuk tuk's doing U-turns, horses and well anything travelling on the roads; We came to a street corner; posed with sign posts of temples in the surrounding areas and I guess confused faces a local guy, with the kindest face approached us and said, “Would you mind If I could tell you a little about my home, it is my pride and today is a government day”. We didn't understand what he meant until he explained that a government day is a holy day, like a celebration day or maybe a Bank holiday if you live in the UK. The man heckled down a tuk-tuk and said to him you take these friends of mine wherever they wish to go; You shall be their driver for the day, wait at each location and they will pay you only 40 Baht when you take them back to their hotel. For anybody who isn't sure 40 Baht is less than one British pound. Brilliant!

Our driver was lovely, helpful and patient. We weren't rushed or hassled to move onto the next stop, not once did he ask how far we wanted to travel. Unlike in the UK money is money and any amount of money is better than no money, even if he was earning less than a pound a day. We visited the Old town on a river boat and Twat Intharawihan which is a huge golden standing Buddha and of course he took us to his friends shop! None the less it wouldn't have been Thailand if they didn't look out for their friends! Except a lot of that!

Across the rest of the days we visited the floating markets; which by the way so aren't worth it! The Reclining Buddha (Wat Pho), Wat Kalayanamitr, Wat Sommanat (Hundreds of Buddha's all lined up) and of course the Grand Palace. Among other Wat's and Pho's we truly got a good taste of Bangkok! We walked mostly everywhere or took Tuk-tuk's because it is the best way to get around, see things and it saves so much money! We were on a £30 a day budget for food and activities so we didn't want to waste anything! We also went to Dusit Zoo which was cheap as chips and really good too! But our short sevens days was packed full of activities, within our budget, culture rich and all whilst we were still suffering from jet- lag...