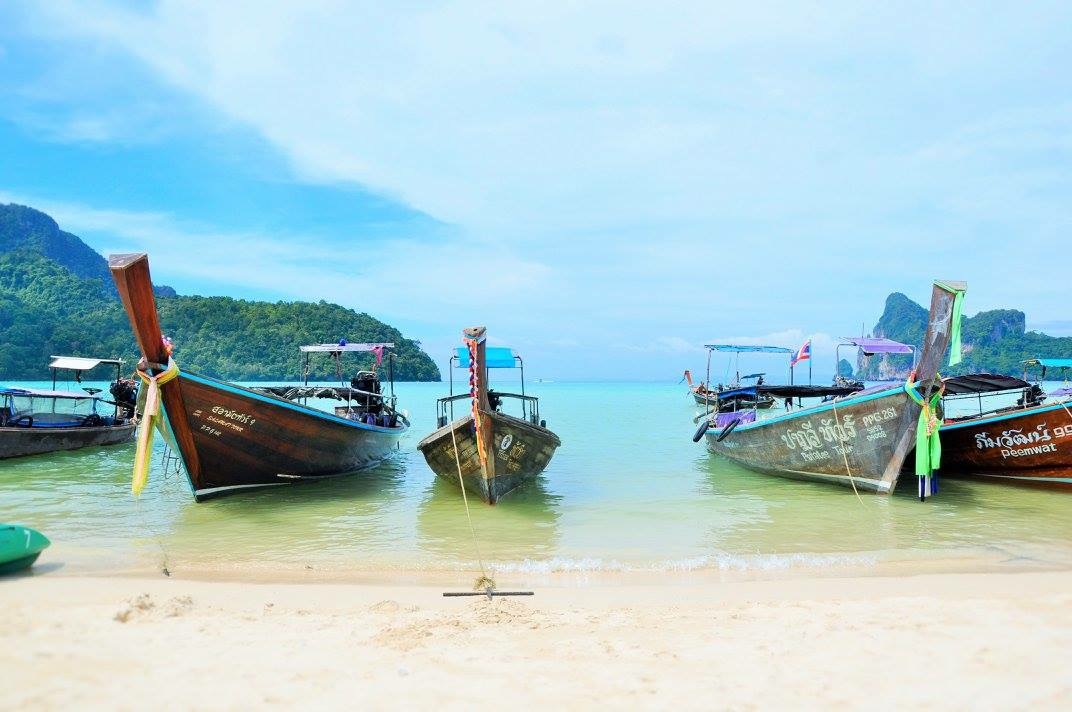 After enduring a two hour boat ride across the rocky, rough waters which separated mainland Thailand from Phi Phi Island we finally gained site of this little island of paradise called Phi Phi. Scrounging our way of the boat, across another, across another we climbed on board the pier which lead us to the sandy beaches which surrounded Phi Phi's vibrant, hectic core. The island may have only been small, but my goodness was it busy! The street were tiny, lined with markets, bars and restaurants. There was a dive centre on every corner, a party happening in each bar and the whole place was filled with the energy of buzzing young travellers, holiday makers and we were just standing staring at this madness! We pinched ourselves and began wondering the streets, praying we'd have a hope in hell at finding the place we were staying at!

After unpacking...again! We set out for relaxation by the pool! Phi Phi is never quiet, there is always music playing somewhere, somebody fire breathing or doing something crazy! It's a great place to be if you want a bit of madness for a few nights.

Whilst on the island we'd booked a diving course, I have a fear of drowning so I chickened out after the first few attempts. None the less Duncan thrived of it, the footage he has is amazing and the ocean is just the coolest place too see! Now Duncan has his open water PADI diving certificate and cannot wait to get back to it. I'm a little sad I wasn't able to get it but I'll do it again one day.
I've not been abroad much, in fact I've only left Europe on one other occasion so clear blue seas and the white sand of the island isn't something I've experienced before, I can only describe it as picturesque.

The colours of the fish were just incredible, the warmth of the water upon my skin was bazaar. The vibrancy of this island was breath taking. On Phi Phi there's plenty of places to eat cheaply, mostly hangover foods but none the less by this point we'd barely eaten since we left home so we over indulged all week!

The nightlife was great, we watched fire shows, browsed the markets which never seem to sleep, had a Thai massage which was a very strange, but relaxing experience, got our feet nibbled by fishes, went on late night strolls along the beach and returned to our hut at the end of the day.

On one of the days we hired a kayak from the beach front, cheap as chips about five-pounds between the two of us for two hours! We followed the recommended route to begin with to Monkey Beach. We thought the monkey's here would be just as nice as the ones on mainland Thailand, but do not be fooled. These monkey's were vicious, territorial and scary! They were breaking into people's bags, they stool are water and people were getting mad at them! Never the less we just went snorkelling and the sea life was something to be seen. Bright yellow fish, glowing green's and vibrant blue's were all among the colours hidden below the surface. We carried on kayaking around the island and found our own little beach bay to chill out in, mind you it was a hard two hour trek but so worth it!

Phi Phi is somewhere we'd definitely recommend for a week's break. From the madness of the street markets, to the serenity of the beach Phi Phi is truly beautiful.

Oh but you will be eaten alive by midges....