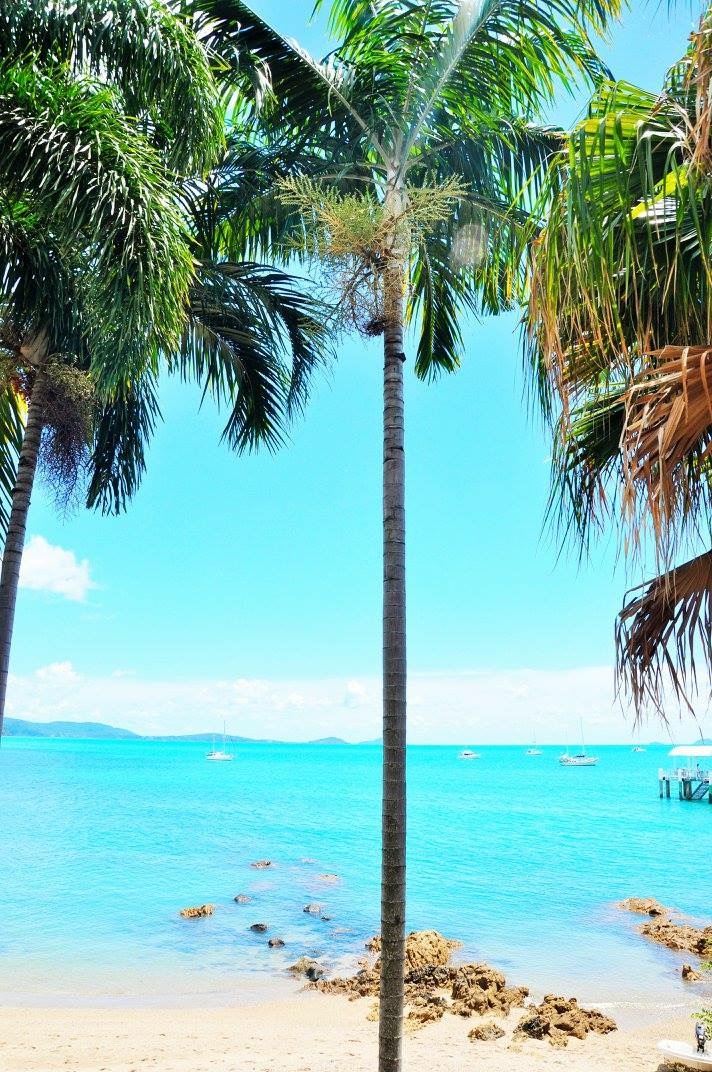 The heat was roasting our skin, every hour of every day, we were just sweating such an incredible amount; both feeling week at the knees trying to sleep at night as our van didn't have air-con! We'd had enough so we booked ourselves into an Air 'bnb' for the week. We'd seen things to do in Airlie Beach and we were making good time, heading towards Cairns so we decided to make base for a week.

We stayed in a super nice, cheap air bnb. Because we had the van it didn't matter that we'd booked it a little out of the city centre; but it was still a walk able distance (We'd just gotten lazy). Our hosts were really lovely, we'd only rented a room because it meant we still had access to a bathroom, kitchen area and garden it was just shared with another set of guests; which was great because we met more people! It was approaching one of our last weeks in Australia and money was getting tight but instead of sticking directly to budget we just went for it. We knew that things we wanted to do up were going to be a little out of budget but hey, we'd gotten this far!

Airlie itself has a few quirky shops, full of friendly people, nice bars and restaurants and generally a nice vibe. There's a lagoon right in the centre, which was full of people chilling out or chilling down in the water. The lagoons are great because they're friendly, free and everybody know's their there. Our Air bnb didn't have any wifi; which meant we spent one afternoon sat in a bar video chatting home and catching up with social media (which is quiet nice to do when you've been away for so long). Following our free wifi use we'd booked up to go Jet Skiing, skydiving and take a trip to the Whitsunday's. (Slightly over budget).

Our Whitsunday's day trip came around on the Tuesday; after an early start to catch the ferry which would take us to the islands we were breezing across the bluest see I've ever seen. Watching sea-cows in the water and short glimpses of turtles. The cruise to the Whitsunday Island itself took around two hours. But on arrival we understood quickly why everybody wanted to go there!

airlie beach whitsundays aus (60) Whitsunday Beach - Gemma & Duncan gazing into the bluest sea!
The day trip was around twelve hours long, start to finish and the cruise boat we travelled with were great! The staff were really helpful, the boat was comfortable and for the money we paid for it we got really good service, great food and free stinger suit hire! The companies which drop people off to the island's in the morning mains concern seemed to be passengers safety in the water, which is always good to hear!

After prancing around in ridiculous looking stinger suits we jumped into the water, face first; suddenly the underwater world met our eyes, it was breath taking and almost difficult to take in. A whole range of fish and coral lay beneath us as we glided along the surface of the water, we spent a few hours swimming about. Following our snorkelling we lay down on the shingle - free sand which tickled our toes as we sank into it strolling along. Both of us lay in the heat just feeling the sun gently warm us up. Sadly it was time to board the boat back to the mainland! As all of the boats edged away from the shore, it became apparent how peaceful the island was; no cars, no facilities, nothing, just nothing! It's a shame nobody stay's there to see the stars at night, I can only imagine their beauty.

The following day we did the board walk, which follows along the coast into the next small village. A lovely walk, flat and easy! In the afternoon we lazied around in the lagoon until the sun went down. The following morning we were up bright and early to get ready for our skydive! I wasn't sure how to feel, nervous, excited or scared. On arrival at the site for our skydive we watched endless safety videos and waited aimlessly for hours until it was our turn. Finally we were called up to get suited and booted!

Climbing up into the plane, being strapped into my instructor and listening to what was going to happen next was making me pretty anxious. As we took off the plane door slammed shut and that was it! A German man was with on the plane and after a twenty minuet wait we were told it was time. He was asked to open to door of the plan, by this point I was beyond sure of my feelings. But I didn't know what to except either! The rush of the wind, the sharpness of the cold air from the clouds and the piercing sound of the plane was a lot to take in as my instructor edge me across the plane and hung my legs over the side. Before you get into the plane they mention to you about smiling; the instructor won't push you until you smile, that's the trigger button! My instructor made a joke, indeed I smiled... I wasn't ready at all! As I went tumbling out of the plane so fast that I couldn't quite take in all of the details of my surroundings, the air was rushing past me so fast until all of a sudden, the parachute cord was pulled; as it jolted me back up into the air, I felt suddenly able to breath again! Pause for thought, the view were incredible. Of course Duncan looked reasonably relaxed and completely unfazed by the motion of being chucked out a plane at 14000 ft.

After all the adrenaline we had another down day, where we just went to the markets and the beach and enjoyed the fresh air. Towards the end of our week was our Airlie Adventure jet skiing tour. Booked as a treat for our 1 year anniversary! Jet skiing was one of the best days and the day which sticks out in my mind the most beside the barrier reef. Obviously we were celebrating being together a year, and what a year it had been; however skimming across the ocean, chasing the sun for hours at high speed was just awesome! We'd kinda turned into adrenaline junkies by this point!


Subsequently following jet skiing we jumped in the van to chase the sunset down to the beach! The sun setting over our Airlie beach adventure was truly mesmerising.

To finish the week we grabbed a take away (another pizza, because pizza was cheap) And ate it on the decking back at the house, next to some low lit lights! Blissful, perfect and super romantic...Except the midges which joined us for dinner...ha!