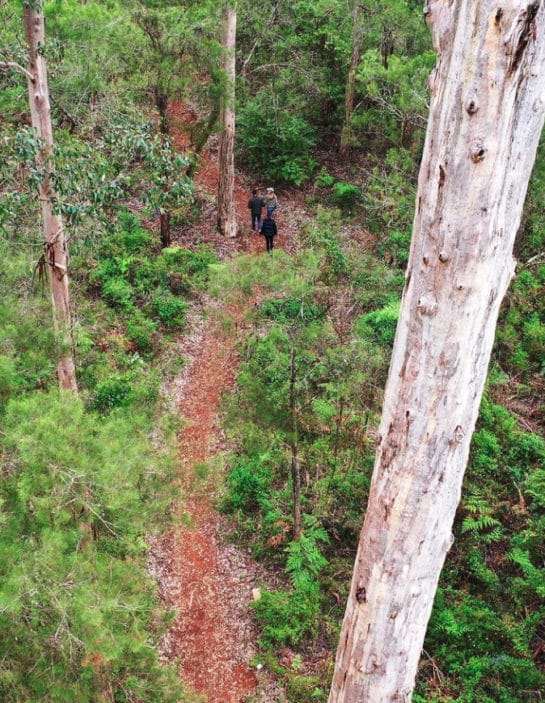 In the lush forests of Pemberton, two giants stand taller than the rest: the Gloucester and Dave Evans Bicentennial Trees. A favourite for thrill-seekers and adventurers, climbing the trees provides an opportunity to take in the majestic canopy of the surrounding karri forests.

A magnificent karri, the Gloucester Tree was instated in 1947 as a fire lookout – before the use of spotter planes, there was a network of trees in the south west forests, where lookouts would check for signs of smoke. One of eight lookout trees, there were a further ten built lookouts scattered throughout the south west. After being retired from use as a lookout, the tree is now a popular destination for brave visitors who want to try the climb.

About 20 minute’s drive away, you’ll find the Dave Evans Bicentennial Tree. Standing at 75 metres tall, it’s even larger than the Gloucester Tree, and was named after the local politician who held the seat of Warren between 1968 to 1989. The tree was pegged for climbing in 1988 in celebration of Australia’s bicentenary, and while it was never officially utilised as a fire lookout, it has been used in cases where spotter planes were unable to fly.

With 153 metal pegs, you can climb to the Gloucester Tree lookout 53 metres off the ground in the 61 metre tall tree – originally built from timber, the platform has since been reconstructed in steel. Reportedly

I should state just that its magnificent! The blog is instructive and dependably create astonishing things. ลิงค์รับทรัพย์

A debt of gratitude is in order for composing such a decent article, I bumbled onto your blog and read a couple of post. I like your style of composing... เทคนิคการเล่นสล็อต

Recognizes for paper such an advantageous creation, I lurched adjacent to your blog other than decode a restricted report. I need your system of engraving... ป๊อกเด้งออนไลน์

A debt of gratitude is in order for composing such a decent article, I staggered onto your blog and read a couple of post. I like your style of composing... สล็อตทุกค่าย

A debt of gratitude is in order for composing such a decent article, I bumbled onto your blog and read a couple of post. I like your style of composing... เว็บสล็อตใหม่ล่าสุด