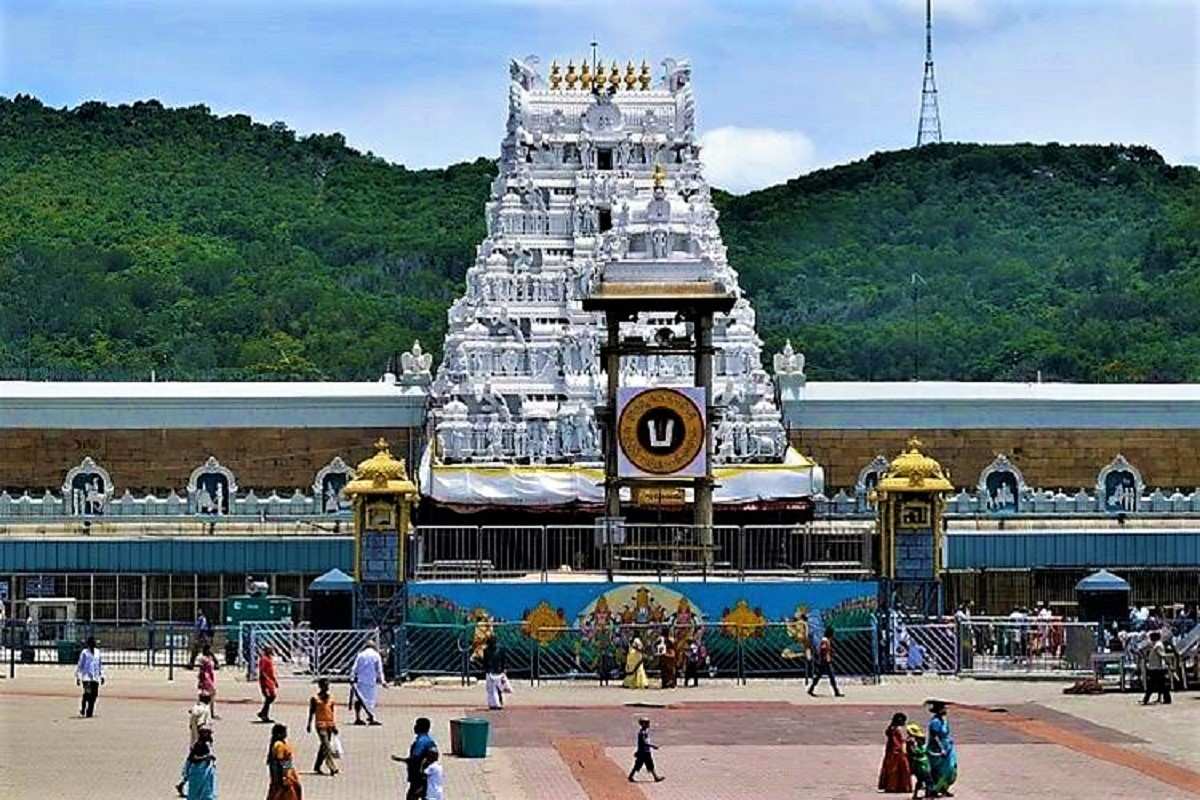 Tirupati Balaji Devasthanam is located in the Chittoor district of Andhra Pradesh. This temple is also known as Venkateshwar temple and located on Tirumala hills. According to the legends this temple is around 2000 years old and in the present, this temple is considered one of the richest temples of the world.

The annual income of this temple is more than 31 billion rupees and around 30 million devotees coming to visit this temple yearly. Mostly the donation was given in the form of gold by the pilgrims which are coming from different parts of the world. This is one of the most interesting and wonderful pilgrimage destinations on the earth today. People believe that the main deity of this temple Lord Vishnu is still living in this temple in Kalyug.

History of Tirupati Balaji Devasthanam
According to the Purans, the very famous sage Brighu Rishi wanted to check which is the best amongst the holy trinity gods (Brahma, Vishnu, and Mahesh). But he was not satisfied with the evaluation of Brahma and Lord Shiva then he moves back to the Vaikuntha where Lord Vishnu lives with goddess Lakshmi. Upon reaching he kicked on the chest of Lord Vishnu as Goddess Lakshmi always lives in the chest of Lord so she felt insulted and left Vaikuntha on the spot and came to the earth.


In search of goddess Lakshmi Lord Vishnu also come on to the earth and he found that Goddess Lakshmi had taken birth in the family of a king and named Padmavati. Lord Vishnu went on to a hill and start meditating when lord Shiva and Brahma know about this they come on to this hill in the shape of cow and calf and poured its milk to feed Lord Vishnu. As per the mythology planned God Vishnu and Goddes Lakshmi met each other in the form of Venkateshwar and Padmavati. Since that time Lord Vishnu lives on the hill called Tirumala Parvat in the form of Lord Venkateshwar in Kalyug.

How to reach Tirupati Balaji Devasthanam?
This temple is located in the state of Andhra Pradesh in the Chittoor district. This is a world-renowned temple so the whole district is highly developed. This place is well connected by roads from Chennai and Hyderabad so devotees can easily reach by road from neighboring states. The nearest railway station is Tirupati Railway station which is linked by Bangalore, Chennai, Vishakapatnam, and Madurai .only 2 km from the main temple and you can hire a taxi/ jeep to reach this temple. The nearest airport to reach Tirupati is Chennai airport which is only 100 km from Tirupati Balaji temple and you will get direct taxis as well as sharing taxis up to Tirupati Balaji Temple.

Why Thirupathi is famous in the Hindu religion?
This temple is very famous in the Hindu religion as it described in detail in Puran’s and in Hindu mythology that Lord Vishnu residing in this place in the form of ‘Kali’ Until the time period of Kalyug to bless their devotees. The maximum number of devotees and the largest amount of donations make famous this temple in all around the world.

What is ‘Hundi’ at Tirupati Balaji Devasthanam?
‘Hundi’ is a kind of container where devotees offer money or things to the god during the visit of the temple or sacred place. The Hundi in Venkateshwara temple is placed on a height place just after the temple where devotees can offer whatever they wish to offer after the darshan. People believed that you can offer them everything what you bought inside the temple such as Gold, money, precious jewelry, etc. you may also offer your sins, pride, anger, and arrogance which is taken by Lord Venkateshwar.

Why people donate hair at the Tirupati Balaji Devasthanam?
It is a very old ritual to donate hairs at Tirupati Balaji Temple. It is believed that hair is one of the beautiful features of men and women and they sacrifice their hair to pleased Lord Venkateshwara as they donate one of the most important parts of his material body.  As per the legends, hair is also the significance of ego and if you shave your hair in front of the god you will also leave your ego behind while paying homage to the god. Hair donation is considered the best offering to the god at Tirupati Balaji Temple.


The architecture of the Tirupati Balaji Devasthanam
The Tirupati temple is constructed in Dravidian style architecture and it was begun to construct in 300 Ad. There are many kings making regular contributions to built this temple. During the 18th century the Maratha General Raghoji I Bhonsale given the concept to administer the temple. The‘Garbhagraha’(main sanctum) is called Ananda Nilayam. The main deity of this temple is Lord Vishnu present in the form of Lord Venkateshwara is in a standing position facing east in Garbha Graha. There are three main entrances facing towards the Garbhagraha such as Padikavali,  Vendivakili, and the Bengaruvakili which is also known as a golden entrance. The wooden doors are decorated with beautiful carving and gold gilt plates. The temple has one of the massive stocks of golden ornaments used for decorating the Lord.

What are the facilities for Tirupati Darshan?
The Tirupati Balaji temple has many facilities to provide a comfortable and rush-full darshan to the millions of devotees. They have facilities of hygienic, airy que halls for line up darshan to control the huge crowd and also have VIP darshan facility to avoid the queues after paying a little amount. They make big halls for accommodating pilgrims, the temple also provides the facilities of hair shaving where thousands of devotees offering hair to the god. This temple is also having a big hall used as a dining area to provide free meals to the devotees where free meals are served round the clock. They have also catering facilities inside the halls run by branded food outlets. The management of this temple also provides the services of free buses to cover the nearest temple visit, medical aid center, and reservation center to book train tickets.


What are the main festivals of Tirupati Balaji Temple?
There are two grand festivals celebrated every year at Tirupati Balaji. The first one is ‘Brahmotsavam’ which is celebrated for 9 days. This function will be attended by millions of pilgrims every year from all around the world. The big festival is ‘Vaikuntha Ekadashi’ it is believed that the gates of heaven will remain open on this auspicious day.


Special Facts about Tirupati Balaji Mandir
Tirupati Balaji idols always maintain a temperate 110 degrees Fahrenheit.
The idol of Lord Tirupati Balaji will appear to stand in the center of the Garba Graha, but technically it is placed in the right-hand corner of the shrine
The idol of Tirupati Balaji always looks swatting and the priest make it dry with the help of silk cloth
A sound of ocean waves can clearly hear by putting your ears on the backside of the deity image.
The special flowers offered every day to the god during worship are bringing from a sacred village nearly 20 km far from the main temple. But the fact is this village will never been seen by outsiders except for the locals.

I propose only great alongside legitimate information, subsequently picture it: เทคนิคการเล่นสล็อต

I utilize fundamentally unrivaled textures : you will find these items by: เกมส์ไพ่ป๊อกเด้ง

I inquisitive more enthusiasm for some of them trust you will give more data on this subjects in your next articles. epoxy flake flooring sydney

I can suggest essentially not too bad and even dependable tips, accordingly see it: 온라인바카라

For this site, you will see our record, make sure to experience this information. สล็อตรวมทุกค่าย

I propose only great alongside legitimate information, subsequently picture it: สล็อตใหม่ล่าสุด