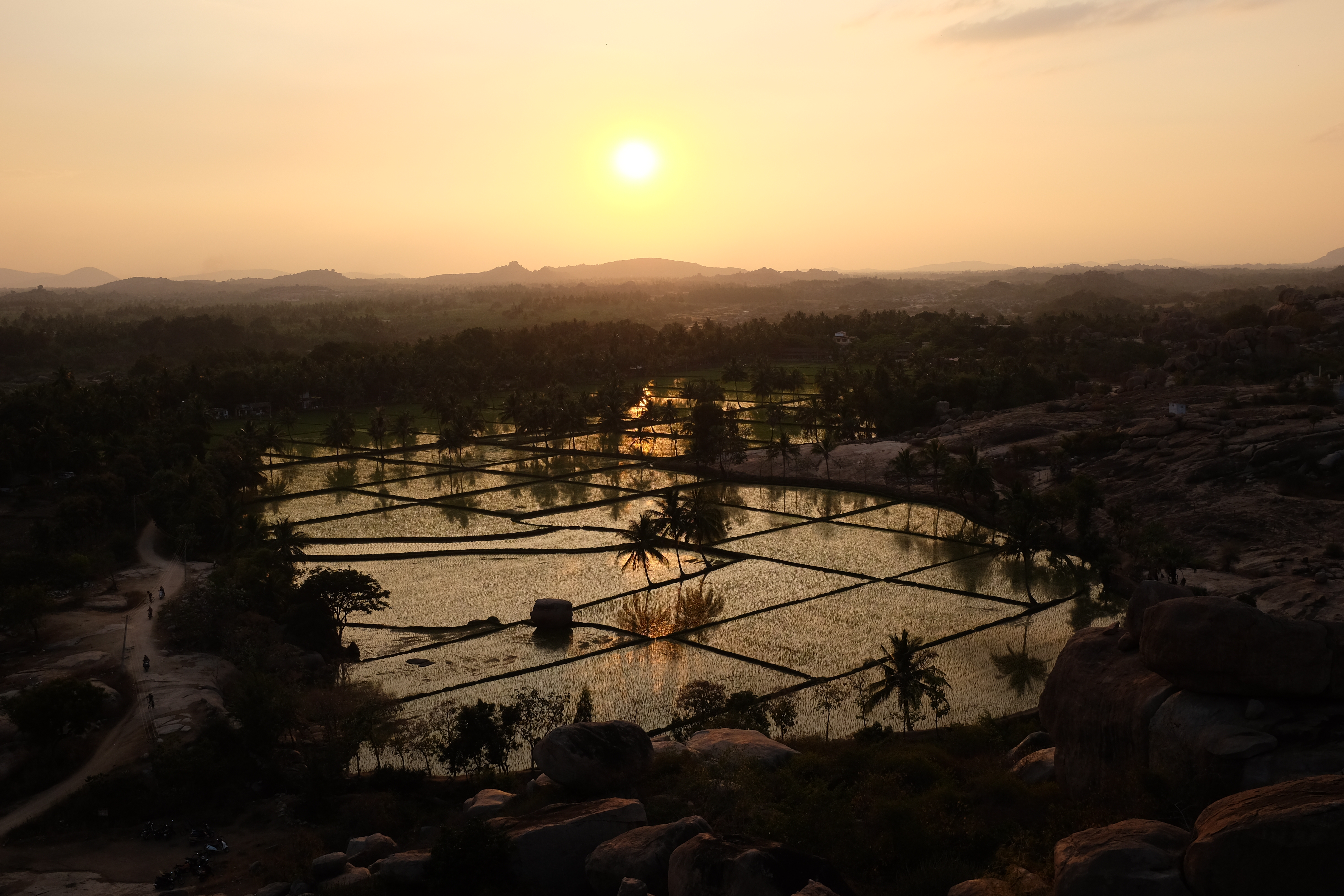 After an 8-hour hot and bumpy bus ride from Gokarna, we arrived safe and sound but tired and hungry at Hospet, few kilometers away from HAMPI.


HAMPI is one of the UNESCO World Heritage Site in India, famous among foreigners because of its magnificent ruins of Architecture from the Vijayanagara Empire which are spread over 4,100 hectares and famous to the locals because it is a site of pilgrimage. Hampi,also referred to as the Group of Monuments at Hampi is a must visit for travellers who love culture,history and architecture.UNESCO described it as "austere, grandiose site" with 1,600 surviving remains of the last great Hindu kingdom in the South India, that includes "forts, temples, riverside fixtures,royal and sacred complexes, shrines, pillared halls, mandapas, water structures ( including a big pool/ bath where the women of high stature take their bath) and many more.

Not only that, the opposite side of the river, known as the hippie side is a place for backpackers and rock climbers, which can be reach by a 3 minute boat ride for 20 Rupees each.

With the number of architectural and historical remains, giant boulders, rice paddies and banana plantations, Hampi offers you both serenity and adventure.

From Hospet (13 km away from Hampi),there are buses that stop exactly at the monument sites.You can reach Hampi for about 30 minutes or so depending on traffic conditions.We arrived at around 3:00 PM, with our heavy bags we started looking for a place to stay. There are a lot of guest houses at Hampi which are on the verge of possible demolition because UNESCO and the Indian government want to protect and clean up the site. If this would push through a lot of locals who built their homes and businesses here will be greatly affected. The plan is for them to relocate to a place few kilometers away from the monument sites.

Few minutes after we arrived, we were greeted by many locals and rickshaw drivers offering us a place to stay. We did met this guy who showed us a place. It was not bad, for about 500 Rupees a night (SIRI HOMESTAY), we have a bed, toilet and shower inside,and free wifi(yehey). When we arrived at the room the caretakers were having lunch and they offered us some Poha, yellow, spiced flat rice.There are also a lot of restaurants in Hampi and mini stores so you wouldn't get hungry here. They offer Indian food, burgers ,pizzas,pastas and many more.

Hampi monuments are found in different locations,sometimes kilometers away from each other. It is advisable to hire a guide to take you to these sites.Most guest houses have guides and rickshaw drivers they offer for a fee. But you can also discover it for yourself, hire a rickshaw, rent a bike or just hike. We opted to go to the sites by ourselves.

The day we arrived, Rob was a little bit sick. I think it was from the bus ride which was actually very tiring. So the first day and first night we just stayed in the room after dinner to get some rest for the next day.

The next day with only our camera and a map on hand, we started exploring the vast area of Hampi, hiking through trails, looking at magnificent structures. As you look at its grandeur , you will be amazed on how much work they put into their architecture, with the details crafted into them, you will be impressed. Because Hampi is also a famous pilgrimage site, you can see a lot of Indian-Hindus here. It's a great place to learn about their social, economic and religious culture.

Virupaksha Temple in Hampi is a must place to visit for history buffs and religious people. The temple is located on the banks of the river Tungabhadra and is one of the structures in the Group of Monuments in Hampi. This temple which is dedicated to Lord Shiva, is the main pilgrimage site in Hampi. You can therefore see a lot of Hindus in Hampi.If not staying in the guest houses, they stay outside the actual temple. Inscriptions on this temple are dated back to the 9th and 10th century.


Although Hampi has lost its former grandeur and glory, Virupaksha temple is fully intact and is a significant pilgrimage site. The temple’s towers are 50 meters high and the complex has gateways, shrines, courtyards pillared pavilion, three ante chambers, etc. The most interesting part of the structure is the inverted pinhole image of its tower present on the inner wall. The temple has its own elephant called Lakshmi. The best time to visit the temple is during the temple festival, which is held in December and February.

We stayed at the Hampi bazaar where the ruins are for 3 nights before we went to the other side of the river, which is referred to be the hippie side of Hampi.

On the other side of the river you can  experience a different vibe than that at the  Hampi bazaar.This is commonly called the hippie island or Locally known as the Virupapur Gaddi.Different from the other side where there are more pilgrims found, here there are more foreign tourists,mostly backpackers who enjoyed more of the relaxing side of Hampi, gazing the green rice paddies, exploring the place with a scooter,hiking and climbing the rock boulders.

We stayed at the HEMA Guest House for 500 Rupees a night.They also have their own restaurant.You can alo check out Shiva Villas if you want a more fancy stay at the Hippie side.

SUNSET POINT @the hippie Hampi side

It is also a must see here,  the sunset at The Sunset Point.To reach the sunset point, you must climb some boulders. And because I am afraid of heights it was a bit scary for me. But the view was definitely worth it. Here you can see Tourists enjoying each other's company , playing some strings, relaxing and waiting for the sun to set with a cup of hot chai sold by the local children.

On our last day at the hippie island, we rented a scooter to check out the place where you climb 575 steps to reach the top. This place is called Anjaneya hill (the monkey temple),the birthplace of Lord Hanuman. This place is few kilometers away from Hampi and it is also worth visiting. It was a bit of a climb but the view on top was breathtaking. Rice paddies, banana plantations and a view of the Hampi ruins.

HAMPI, indeed is worth a visit.