8 Factors leading to poverty in Asia

8 Factors leading to poverty in Asia 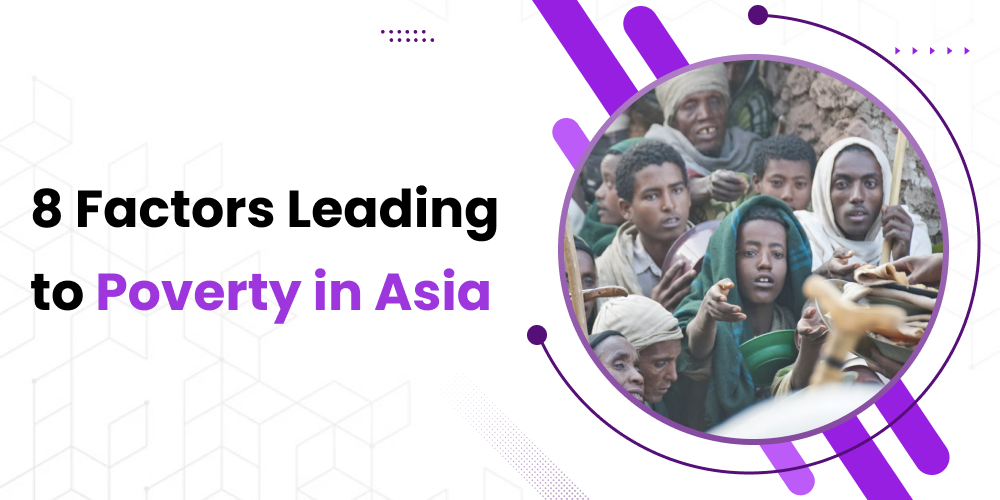 Poverty is a worldwide problem. However, the causes of poverty vary from country to country and region to region. Asia, being the world’s most populated continent, has seen a lot of progress in some countries while others have been slow to develop and reduce poverty. Currently, over 40 percent of the poor living on less than $1.90 live in Asia. Most of these people live in developing countries like India, Pakistan, Bangladesh, Yemen, Indonesia, The Philippines, and Afghanistan.

Though the reasons for poverty can be similar throughout the world, there are certain causes of poverty in Asia that are unique to the continent.


Population Explosion- Many Asian countries grapple with huge populations. The increased population pressure on limited resources means that not everyone gets a fair share of what they are entitled to. For instance, high property prices coupled with inadequate incomes mean many people are left with very little money after paying for high rents and other fixed expenses.


Food insecurity- More than half of all those who suffer from hunger live in Asia. With increasing food prices, the poor are spending more on food than ever before. This results in food insecurity. Rapid urbanization, reduction in agricultural land, and poor policy-making by governments result in rapid inflation and scarcity of food that cannot feed the hungry & poor.


Lack of proper education- In many developing Asian countries, some people drop out of school to eke out a living. They do not have the basic arithmetic and literacy skills needed for a proper education. This restricts their chances of getting a good job or a better education.


Inadequate access to healthcare- When the poor get sick, many do not have access to affordable healthcare facilities. They are forced to borrow beyond their means to pay for healthcare. Sometimes, many poor people do not even visit a doctor as they do not have the means to spend for treatment.


Corruption- Many developing countries suffer from endemic corruption and weak governance, which do not let social welfare resources reach the actual beneficiaries. This is a problem across Asia- India, Pakistan, Bangladesh, the Philippines, Afghanistan, Yemen, and many more countries.


Natural disasters- Many Asian countries are dependent on forestry, tourism, and agriculture for their incomes. When there are natural disasters like floods, earthquakes, cyclones, or others, many people are pushed into poverty as their only source of livelihood is lost. Economic losses due to such disasters are extraordinary, forcing many to borrow or beg to survive.


Recession- When a recession strikes, there is a big chance of people losing their jobs or livelihoods as a result. Countries that are dependent on agriculture, tourism, and manufacturing are particularly vulnerable. In fact, the number of people pushed into poverty increased in all countries irrespective of economic status.


Social discrimination- In South Asia, certain communities are discriminated against due to their caste. This prohibits them from getting a good education or jobs which can help sustain them. Many of these ‘lower castes’ face systemic poverty and helplessness even though there could be ways they could earn a decent income.


Most of the causes of poverty are interrelated. In Asia, with its large population and limited resources, there is a tendency by certain vested interests to hoard resources for themselves while the majority get hardly anything and remain poor.

To help people in need, you can start by volunteering and donating to a good cause. Poverty cannot be eradicated in one go- it requires the collective efforts of all stakeholders to raise the standard of living of everyone in a country.

Here at Catholic Connect Care, we help raise funds and resources to assist like-minded NGOs that help the poor. You too, can help us in this initiative and earn the blessings of God. Even a small $15 donation can help those in need.

Add catholicconnectfoundation to your subscriptions feed