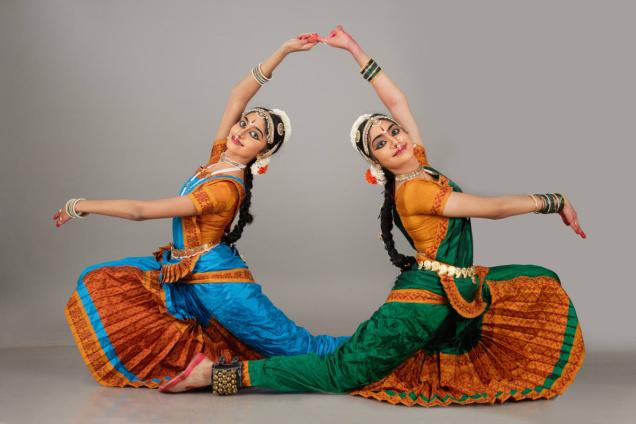 Tamilnadu state of India has a large legacy of art and architecture. Besides it the cultural heritage has deep roots in history and civilization of Tamilnadu. The 3 forms of entertainment namely Lyal (Literature), Isai (Music) and Nadagam (drama) play pivotal role. Dance referred as Nadagam in Tamil seeks it is origin from the ancient dance drama known as Therukoothu. The traditions of music and folk dance of Tamilnadu bespeak of the spirit of Tamilnadu and the aesthetic love of the people. Below are the famous Tamil Nadu Dance forms.

The Bharatanatyam is one of the major classical dances of India which finds it is origin from Tamilnadu. This Tamil Nadu dance is performed by ladies showcasing south Indian religious themes. This  solo dance is noted for remarkable footwork and sign language based on gestures of hands and ages. Most of the themes of the dance are based on the Hindu legends.

This Tamil Nadu dance is very popular and is dedicated to the worship of Lord Krishna. This is performed on the eve of Ramanavami inside the temples. It is done around the lamp.

Villu Pattu is a notable form of folk dance and attracts the urban and rustic folks alike. In this dance performance the singer is accompanied by a chair and with the musical instrument Villu or view fired with bells. When Villu is struck the jingling of bells starts and the head singer narrates a tale with thrilling songs.

According to the regional rituals of Tamilnadu the snakes have much popularity and their worship is conceived to bless the family and harness the well being of the society. Thus snake dance is one of the popular folk dances of Tamilnadu. In this dance performance the girls perform clad in the attire of snakeskin dress.

This is a sort of stick dance and emerged as a rustic dance form. The women perform this dance holding two sticks in each of their hands and beat them to make a sound.

This had been a popular martial art practiced by the tamil rulers which adopted the form of dance.

This is a dummy horse dance in which the dancer parts the shape of a horse on his hips. This traditional dance of Tamilnadu needs much preparation and skill. The dancing gear is made with utmost care which can swing back and forth coming the legs of the dancer. The dancer has wooden legs to appear like the hooves of the horse. The dancer holds a whip or sword during the performance.

Karagaattam is a popular folk dance of Tamilnadu which has exception art of the balancing of clay or metal pots on the heads of the dancers. The dance is associated with the worship of Amman. These pots have cone, topped with a paper parrot with the movement of the dancer the parrot birds. The dancers pay respect to Gangai Amman the goddess of river.

The word Chekkai signifies special in Tamil and Attam means dance. Chakkai Attam is one of the most popular folk dances of Tamilnadu. In this performance nearly 8 dances gather to form a circle holding wooden pieces with their fingers to produce sound. The songs are sung during the dance to adore the deities.

This dance has tradition has much affinity to North Indian Kaavad Yatras In which people carry Kaavad on their shoulders. Similarly in Tamilnadu the pilgrims carry Kaavad on stick. Just to motogation tiredness they usually sing and dance in the praise of the God. This dance is performed only by the new. In this Balancing of pole is done with pots tied to the stick on either sides of the stick filled with milk or coconut water.

In this classical dance form women stand on a circle and clap their hands. Kummi dance is performed on all occasions like religious festivals, family gathering or harvest celebration.

This dance is performed by the ladies in Tamilnadu to adore Lord Murugan. In this dance performance women dress like a peacock having peacock Phumbs and sparkling headgears and a beak. This is one of the most popular dances of Tamil folks.

This refers to puppet show. It is customary to arrange puppet shows in the villages during the time of fairs and festivals of Tamilnadu. The puppets are made of wood, leather and cloth and are operated with the help of strings. The stowes of the puppet shows are taken from the puranas and Indian legends.

The village folk dance is performed to appease the rain goddess Mariamman.

This is a sort of love ballad. This is a mixture of folk and classical dance. This was performed by Devdasi practice is stopped. Kuravanji dance is getting less prevalent.