The 7 Things to remember for my next adventure!

The 7 Things to remember for my next adventure! 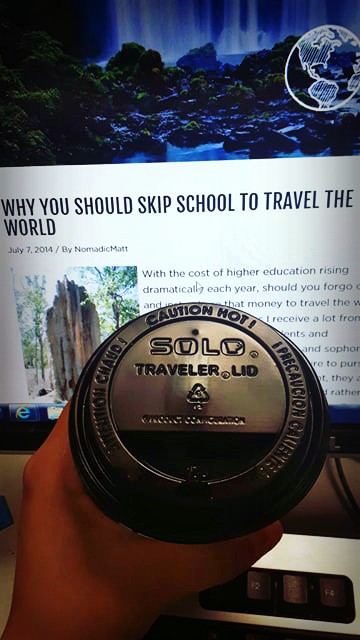 Before heading to Turkey for a week, I figured I needed a plan. I needed to know where to go, what to see, what to eat, what to try.
See, I'm not much of a planner myself. I can't plan ahead as I never end up following the original plan, and plus, there's nothing exciting about following plans. And me traveling was all about escaping routine and being spontaneous.

So as I was sitting at work one day, looking at blogs and reading about other people's adventures as I usually do, I suddenly felt fed up. Not by their stories, but by the fact that I had no story to tell, no adventure to share for the simple reason that I keep telling myself: I don't have time. So I looked at my schedule and figured I could clear some days to travel and later that night, I was getting ready to head to one of the countries I always wanted to see, a country full of magic, rich of culture all by myself. I was already saving for my European trip, so I had enough to pay for this trip.
When I came back home after my trip, I figured I should make a list of things I need to check for my next adventure as so many thing could've been avoided if I had prepared for my trip better;

1./ Before purchasing a plane ticket online, call the airline directly to confirm with them.

Websites such as Flighthub, Momondo or Kiwi are great tools to find affordable plane tickets. Sometimes it's way cheaper than what the airline is offering. But when you get in a situation where you need to change your dates, cancel or modify your ticket, you find no support. Even with insurance, chances of you getting any kind of reimbursement are as tiny as a sand grain.

2./ Be spontaneous but radical.

I wish I had an American or a Canadian passport that would allow me to travel wherever I wish to go, or whenever I have enough resources to do so! But being a holder of a Moroccan passport has its perks and disadvantages. That was one of the reasons why I chose Turkey; because I don't need a visa to go there. My first flight to Turkey was cancelled because transiting through Lyon's airport was an impossible matter without that stupid transit visa. (Airlines do not reimburse you for something like this! Although there was no way for me to know that I could transit through Paris' airport, but not Lyon's).  So back to point 1, make sure that I have the necessary travel documents with the airline, and not the agency online.

I kept telling myself not to take useless stuff, but I ended up with things I regretted taking with me. And as I originally packed my bag for a 6 days trip, I ended up taking more things than I needed. Neither the 4 shirts nor the 2 dresses and the high heels were used. I ended up sticking to my jeans every day because I felt comfortable walking around in them, with sneakers. And on my last day, I wore a dress the whole day because I ended up walking all day and night. Barely made it back to the hotel to pack my things and head to the airport the following morning.

4./ Know when to exchange my money.

As I got to Ataturk Airport, I decided to change some money in case I needed to pay in Turkish Liras. I actually didn't have to do that right away since that night, I paid the taxi in Euro. And also, the following morning, I found out that I would have gotten a better deal with my hotel exchange office than the one I had at the airport.

- Tylenol (Acetaminophen or Paracetamol); I wasn't going to take it with me, but it actually saved my life and my trip. I had a headache on the airplane, I got sick from the weather changes and got a fever on my second night. Tylenol helped me with all of this as it's an antipyretic and analgesic. (I know this because I went to nursing school)
- Warm jacket, for the chilly nights and the unexpected changes of the weather
- Visa/Master Card/ American Express: It doesn't matter, have a credit card on you, just in case. I didn't use it, but still, I would've used it in some situations. You can run out of cash, lose your wallet...
- I.D: I had my passport and my Canadian Permanent Resident card. Every time I went out, I only took one. So in case I lost one, at least I had an I.D somewhere.
- Lotion, because you need to keep taking care of your skin.

- Shampoo and hair-conditioner; because you already get these at the hotel. Also soap. And your hair can go a week without the usual shampoo.
- All your makeup: I love makeup, and I have so many products. But I realized that I don't need all of it with me when traveling. I barely used everyday makeup products, but I ended up taking so much more than what I actually needed.
For perfume, I used the little sample bottles I once got from Sephora and filled them instead of taking the whole bottle.
- Books or extra shoes, because honestly you're barely gonna read and you'll only need one pair of comfortable shoes if you really want to enjoy your trip and the place you're going to. Of course, this depends on how long you're going to this place for and what kind of activities you'll be doing. But just remember that you'll want to buy new things and won't fin the place for it. I found a great book in the airport that I wanted to read on my flight but had to keep it out just because I had nowhere to put it.

7./ Be friendly, but not too approachable.

Now how do I explain this one? You want to be friendly in order to meet new people, get to know the locals, approach random strangers to ask about directions or just suggestions. But not too friendly nor too approachable. My dad often says that I look like someone easy to trick. I look like a nice person, but you're not supposed to look like a nice person - especially when you're travell*ing by yourself. I was approached by an old man who invited me to his store. I ended up buying a very nice carpet, but as I went down, another guy approached me and said that he followed us because he knows the man and that his partner and him usually scam tourists with the crazy high prices for things -they did try to sell me a carpet for 80 Euro lol. The guy ended up being a civil policeman. I totally felt like I was in an episode of Taken. Nothing bad happened- fortunately- but my naivety almost got me in trouble.

Traveling and figuring out everything by myself was definitely a challenge, but it was truly exciting. I wouldn't change anything about how everything went this time just because I learned priceless lessons in life. I had planned my days, although vaguely, but sort of precisely. I knew what I wanted to do every day, what museums I was going to see, what tours I was going on... Everything was going smoothly until I was about to board my first plane and they told me that I needed a transit visa to transit through Lyon's airport. I couldn't sleep that night, but 7 hours and many tears later, I had my backpack on me and was heading back to the airport. I couldn't undo what happened, but I was determined to fix the situation. I ended up finding a night flight to Istanbul with a stopover in Casablanca, Morocco (my home-country). I had to use my credit card, but I decided that memories and adventures were worth every penny. My advice is to believe in yourself and know that you're capable of taking care of yourself. But always remember to trust your gut because everytime I had that "I don't know" feeling, something ended up happening.

Add The7ththing to your subscriptions feed

I have lost a lot of money by not following #4! haha