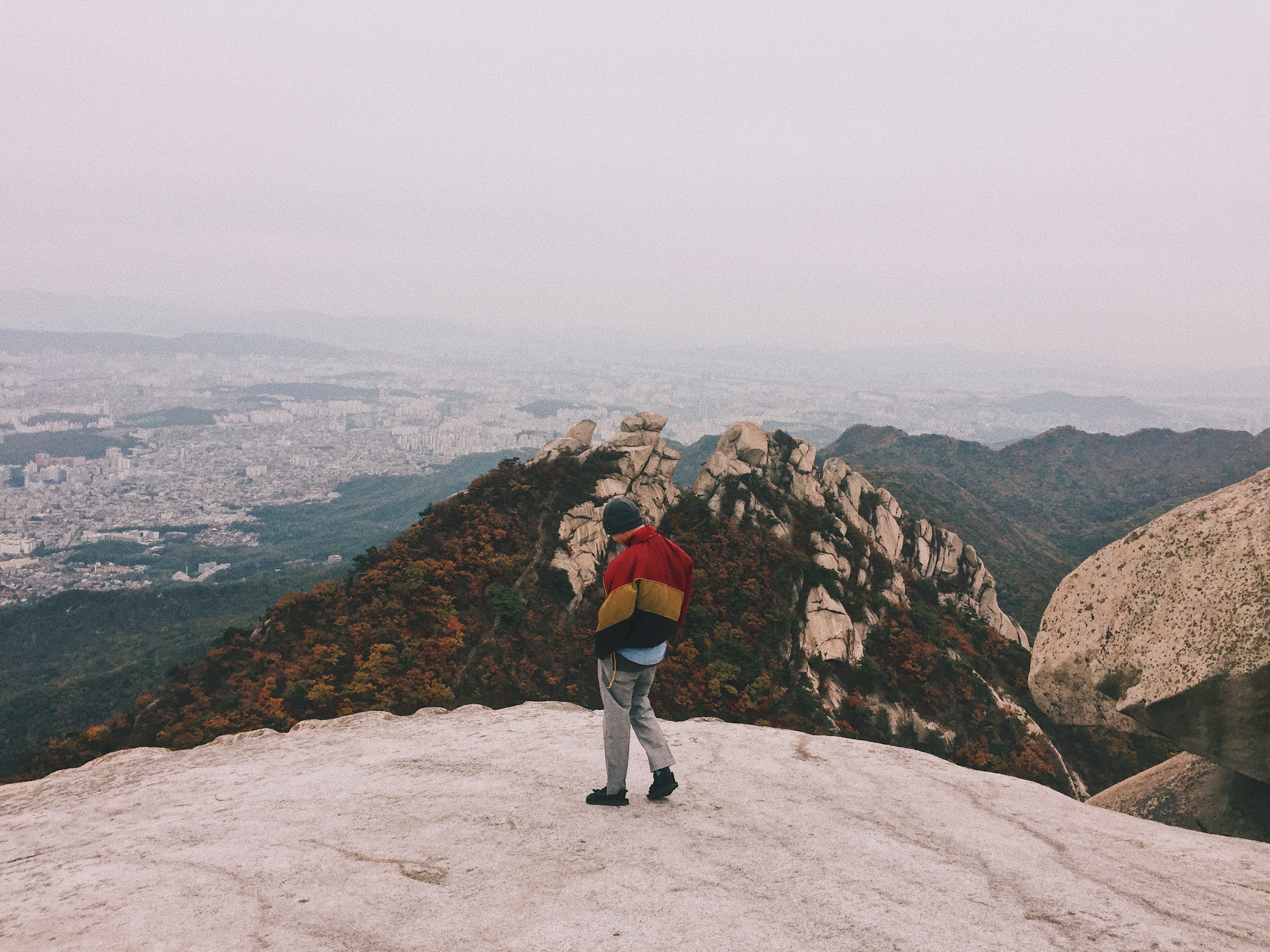 When Bukhansan Conquered and Consumed Me!

Few years ago, I dreamed to go hike and explore mountains. I already did some local hikings and succeeded one major climb in my home country, Philippines. Ever since then, I fell in-loved with this kind of outdoor activity.

In my recent travel, I never imagined I would survived and achieved another goal in my “bucket-list”; that was to hike internationally. I was able to hiked and explored the majestic karst hills in Vang Vieng, Laos - the ‘Phangern Viewpoint Silver Cliff Mountain' unintentionally with my ‘Travel Buddies’. The feeling was unexplainable and made me humbled. I knew that moment and said to myself that I wanted to do more. I wanted to experience that kind of adrenaline-rush and “WOW” moment again.

After praying hard to my Higher Authority (the Lord God), I found myself at the highest mountain near the capital city of the “Land of the Morning Calm," South Korea - Seoul. Indeed, God really provides miracles and answers prayers! So, let me tell you more about my experience with this mountain named “Bukhansan”.

Mount Bukhansan or Mount Bukhan, located at Bukhansan National Park is a major landmark near Seoul since its landscape and elevation (almost 840m) are well-visible mostly to the northern city districts. Also, it’s one of the most beloved hiking destination among Seoul’s mountains. It has multiple peaks but the most famous are the three major peaks namely: ‘Baegundae’ (2,744ft), ‘Insubong’ (2,659ft), and ‘Mangyeongdae’ (2,582ft). According to the locals, Bukhansan means “Mountain North of Han River” or “Big Mountain of North”. There are multiple trails that weave along this mountain; But of course, me and my friends opted to take the route to the highest peak — 'Baegundae'.

To get there, you can use the Train Subway System and go to Gupabal Station, Exit 1 (Subway Line 3) and take the Bus 704 or 34 going towards at the Bukhansanseong Bus Stop. Alternatively, since we came from Hyewa Station (it’s near to our accommodation) we changed to Line 4 from Dongdaemun Station to City Hall Station. From City Hall Station, we walked toward until we reach the bus stop in front of ‘Four Seasons Hotel’. And took the Bus 704 going towards “Bukhansanseong Fortress”.
(Note: Download the “Subway Korea” App in your phone so that you’ll not get confused on their Railway System. Also, there were lots of information tourist centre around Seoul, so make use of it)

When hiking Bukhansan, there are three main courses namely; Samobawi Course, Bibong Course, and Daenammun Course. Among the three, the shortest is the Bibong course. The length of the said course is 2 km and the estimated duration of the trail is just an hour. But since this course is relatively short and the path is straight, expect the “uphill” steep kind of a trail. Mind you, the boulders on this trail are VERY steep. On the other hand, Daenammun Course is the easiest course because it has gentle inclines which are suitable for beginners but also consider the length (5-6 km) and duration (3-4 hrs) of this course. Lastly, the Samobawi Course, where it has many inclines and declines along its trail length of 4.3 km. The difficulty level of this trail is moderate and can finish the course for about 3 to 4 hours.

What we did was we just followed the locals and trust our instincts. As we walked through the entrance of the national park, we were greeted by a big map telling that there were actually two major trail to Baegundae Peak: the intermediate trail (good for beginners and this was the trail we initially chose) and the difficult trail (do I need to explain more?)

To arrive at Baegundae Peak, you can start and get a map at the information centre at the entrance, (which we didn’t do) follow the signages for “Baegundae Peak” or just follow the crowd ahead of you and simply ask them (again, we just follow the people ahead of us). The trails always have people and it’s difficult to get lost if you strictly follow their path. As far as I remember, the distance from the information centre to the Baegundae peak was like 4 or 5 km. But mind you, as you get closer to the peak, the trail was getting steeper and you need to pull yourself up using the steel ropes installed along the way up to the peak. We actually don’t have any idea what course we actually did because again we just “go with flow” and follow people. Poor us!

We started our ascent around 10:30 in the morning and arrived at the peaked almost 2:00pm. The landscape was very distinct because of its big boulders at the peak like those you see at Yosemite National Park in California's Sierra Nevada Mountains! We stayed there for almost an hour to enjoy the view and rest our weakened legs. After doing some photo-ops and self-actualisation moments at the peak, we started our descent using the ‘other’ way. Alternatively, you can return through the same trail but we crossed the park to the other side and walked along the ‘Old Fortress Wall’ so that we could do more exploration in this national park. Since we took the ‘Old Fortress Wall’ trail that added more 4 km on our way down, we reached the base camp area around 5:00pm. Basically, the tourist map suggested that the duration of the whole hike was around 4 hours. Well not for us, because it took us almost 7 hours from way up and down. Again, we don’t know what course we took reaching and going down from the peak. We were all exhausted to the point that most of the time during the descent, we’re not talking to each other anymore and acted like we’re all strangers. After more walking and strolling around the Bukhansan area, we reached the Ui-Sinseol Line or Bukhansan Ui Subway Station. We quickly took the train, changed train to Line 1 and followed the ‘Subway Map’ to the nearest station near our accommodation.

The whole hiking experience was once again humbling. The ‘Autumn Foliage’ I witnessed from this National Park made me astounded and thankful. I was greatly in awe. The view I witnessed at the ‘Baegundae’ was very vibrant and insightful — like literally and figuratively. The people, nature, and time, made this journey of mine memorable; AS ALWAYS. I’ll never forget the motivational phrases my friends quoted along the trail, “You can do it. You have a good branded hiking shoes!” and "The pain is temporary. The view at the peak is something memorable and worth hiking for!”


SO THERE YOU GO! I hope you got something from my journey to the "Big Mountain of the North" - Bukhansan, of Seoul, South Korea! If you have questions or comments, don't hesitate to write it down below! ALSO, Don’t forget to SUBSCRIBE, and PUBLICLY SHARE my 'simpaul' journeys!

Also, you can follow my other social media accounts link in my profile! Let's connect and together, promote traveling!

Add Simpauljourneys to your subscriptions feed

wOW, What great places to see, you guys are lucky enough to have time to spend in this beautiful land of the mountains, we wish hope to visit there from Nepal