Interacting with the Magnificent Creatures in Oslob, Cebu

Interacting with the Magnificent Creatures in Oslob, Cebu 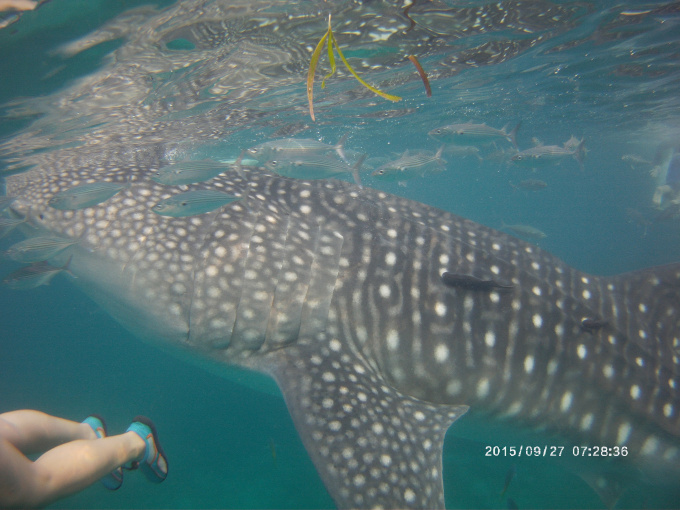 
Whale Sharks are considered and said to be as the living species of the largest fish in the world.


Whale sharks can be seen in a small barangay Tan-awan, which is 10 km away from the center town of Oslob. Whale shark watching in Cebu started last September 2011 and it became popular all over the world when the news hit in the internet last November 2011. By December 2011, local fishermen’s interact with the whale sharks by feeding them that result to flocking of tourist to the beach of Tan-awan. Large numbers of tourists began arriving in Oslob not just to see the whale sharks being fed but also to snorkel or dive with them. for more exciting sea kayak tours.

It was my first time going to Cebu and one of our itineraries is to experience Whale Shark Watching which located in Oslob on the eastern side of the southernmost tip of Cebu Island.

I was accompanied by my friend/travel buddy, Frecy. Our second day in Cebu was already planned for our Whale Shark watching experience. This
was going to be our first-ever interaction with the whale sharks! (Whoa whoa whoa) So we felt very excited that we couldn't sleep at all.

Yet we woke up at very early in the morning and directly headed to the South Bus Terminal station at 3:30 am. As far as I could remember we
left after 30 minutes.

Since we didn't get enough of sleep, we had just slept most of the time while we were on the bus. Then, there was a vendor who got on the bus and offered us that so-called snack "TORTA" Then, we had a little conversation with Kuya (referring to the vendor) since it was our first time in Cebu, we asked him to teach us some Bisaya words. He taught usthis line, "Taramis ta~torta" (which basically means "Delicious Torta?" (hahaha omg) After that short conversation, we killed time sight-seeing outside the window bus. I was in awe cause I had been seeing other wonderful places as well as the sea yet we couldn't stopover.


Finally!!! After three hours of traveling, we've reached Brgy. Tan-awan where we could start our whale shark watching activity. We chose to stay at MB's Sunrise View Resort and inquired about Whale Shark watching. They told us to pay Php500 (since we are local tourists); and even offered us to rent an underwater camera since we didn't own any. We rented it for 600php. (They'll give you soft copies of your photos and videos including CD right after you bring the camera back.) (The rental cost sounds reasonable enough.)

When everything was all set, we headed to the whale shark watching briefing area before we proceed to the watching site. During the short brief introduction about the said activity, they would inform you the things that you should and shouldn't do in order to protect the whale sharks. After a few minutes, we were already on the boat with the other tourist and the two boatmen as well. Later on, we had finally reached the whale watching site and our boatmen started to feed them. We were asked to interact and swim with them in the span of 30 minutes.


As I mentioned above earlier, this was going to be my first time so when I was already seeing the whale sharks for real, I felt the chills
in my spine. The fact that they were just underneath us, I could totally tell that they were absolutely enormous! I was in awe after seeing them. Due to the fact that the whale shark is such an enormous marine life, I felt extremely frightened after seeing it though I was
still intensely enthusiastic thinking that I'd be interacting with them.


My friend and I realized that thirty minutes wasn't that long to spend staying in the boat, so even though we couldn't swim at all, we decided to plunge ourselves into the sea. (Best thing we did was that we rented life vests lol).

I was completely amazed by the crystal clear water, the different species I could see underwater and of course with the whale sharks that were passing beside us.

With the help of Kuya (one of our boatmen), he took us a lot of pictures with the whale sharks and since Frecy and I both couldn't
swim, we were just clinging on the boat. Yet I could certainly say that the whale sharks are breathtakingly gigantic especially whenever they open their big mouths.


Our experience in whale watching was truly remarkable for us! It was not just about swimming with the whale sharks but also, how you could see or meet them in the most behave manner.


We should be a little sensitive when it comes to interacting them so that we can preserve and protect them as well. I think that's one of
the most important thing to consider.

Still, I suggest you to list down "Whale Shark Watching activity in your bucket list! I am certain that you won't regret it! But on the top of that, whale sharks' health is the most important thing that we must always consider. That's the thing the must think first. So, when we do this activity, we have to be more responsible as travelers.

Add Ara to your subscriptions feed