Save it for Bali

Save it for Bali 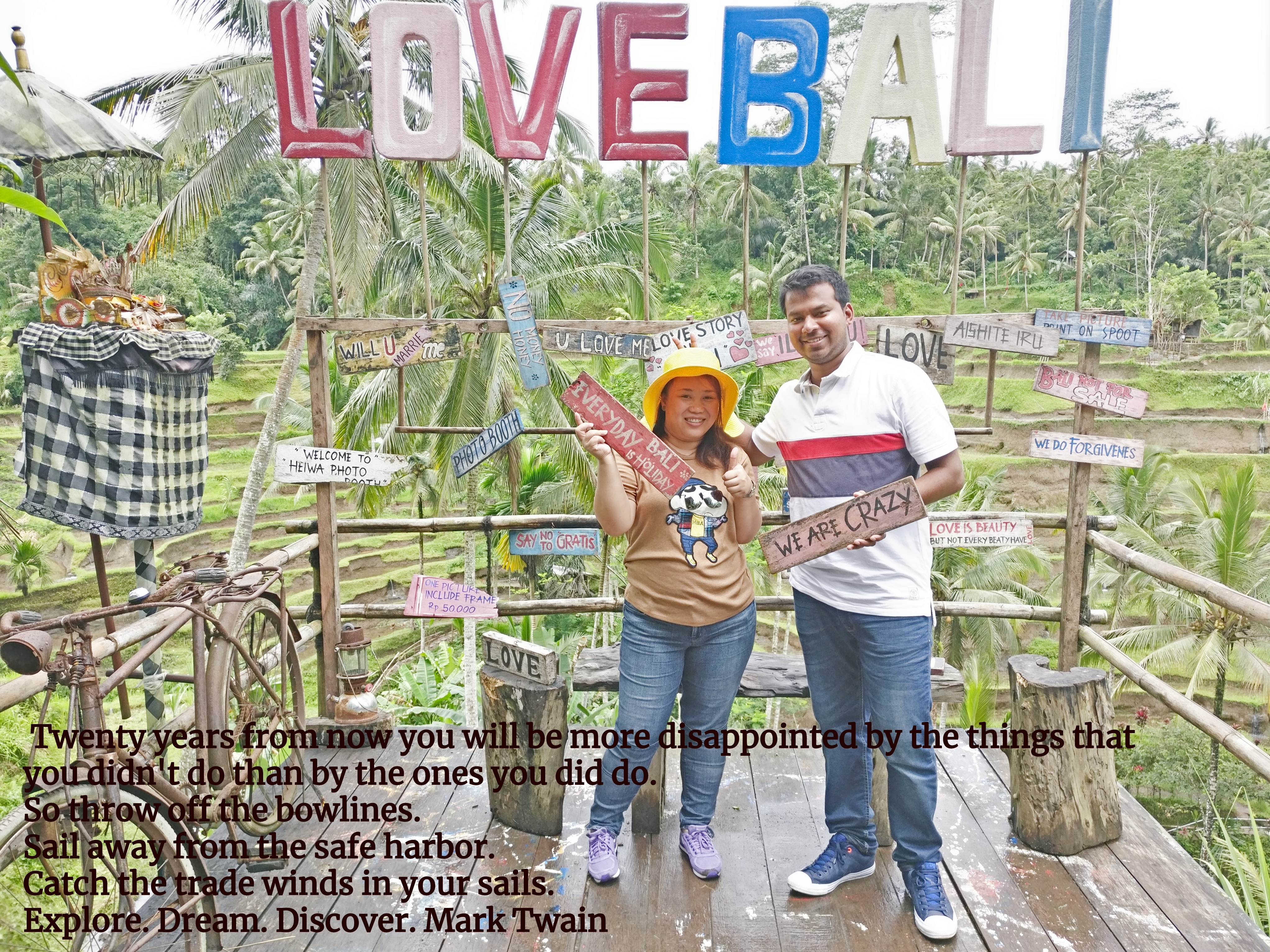 Bali - I only hear it from people around me but never really paid attention to it. Even "googled" it see how it looks like nor listed as one of the places I wanted to visit.
I always wanted to do the "Eat Pray Love" thingy as I got inspired from the famous book & movie but not the same countries.
Knowing myself, I don't want to mimic, I want it differently (in terms of the places I will do the saga).
For Eat - Taiwan, Pray - TBA, Love - TBA until I met someone that Bali became the Love (I think).. For Pray, I have one in mind but for now it's still impossible to do.


As far as I remember the book didn't really imply to follow the order of "Eat Pray Love".
But fate is a cruel mistress, Love chapter came first. (Note: Hiatus from Dec 2017 until January 25, 2019)

So much for the mushy introduction. I am writing this part after a year  (January 25, 2019), on the eve of 2nd anniversary "Save for Bali".
This vacation materialize from this journey (https://trackthattravel.com/travelblog/1059).

When I checked in, it was a mixed emotions of excitement and nervousness. This kind of emotions happened 10 years ago, after college, I travelled to my father's workplace to start my career. Same feeling & situation, at the end of this airplane ride someone special I'll be meeting finally.

Here are few snaps of my waiting time at the boarding gate.

We depart Manila on-time, our flight is almost 4 hours. I slept most of the time; I woke up just in time before we reached Denpasar. I bought ham & cheese croissant and bottled water as I was feeling hungry already. After which, I had some quick freshen up at the comfort room before the captain announced we are ready to descend. We were disembarked a little after 8AM. Thanking God I arrived safely.

Our baggage arrived late, waited for almost 30 minutes and then instructed to moved to another carousel.
After claiming my baggage, I proceed to the Immigration check out.

Immigration check out was quick. No questions asked.
Tip: Always smile and greet them briefly.  Read and follow rules.

Denpasar airport (Bali) is huge and efficient. You won't get lost. I remember my Suvarnabhumi (Bangkok) airport ordeal, it was tedious and have to asked several times until I exit the correct gate where I can collect my luggage.
My Papa waited for almost 2 hours and he got worried as why it took awhile for me to reached arrival area passenger's pick up. Good thing my Philippine sim was activated for roaming, we were able to communicate. WIFI and a smartphone were not yet a technology you had back then when you travel.

Ok back to not so distant past...

When I saw this window, I realized #SaveitforBali is really happening!

Hotel personnel by the name of Handrei, was waiting for me at the Pick-up Zone carrying my full name on a placard. I wanted to took a pic but felt awkward. I hurriedly approached him, he took my luggage and asked how my flight was. We chat while we traverse, hotel is just about 15-20 minutes away via car. Talking to Handrei was just like long time friend whom was so happy you meet each other after a long time. He also asked if I wanted to go with him when he picked up my "friend" who will arrive later, places to go and food to try to.

I arrived past 10am, check-in was fast. As always, there's a welcome drinks. They also told me there's a room available so I can rest,yey! (my mind was already set to wait until 2PM hehe). Thanking God again on this provision.


Our room assignment was very comfy and big. Here are some snaps before I hit the sack.

I just took a nap only I guess less than an hour. Famished, I was wondering If I can order room service as I don't have local currency yet which they happily replied I can charge to my room and pay later (I know I can but my mind is not working when hungry lol). I ordered mushroom soup, pizza (less spicy) and clubhouse sandwich. I left some for Emil who will arrive shortly. I wanted to freshen up before he arrived but I can't open my luggage.
I'll just wait for Emil to help me on my dilemma.

Hotel concierge rung my phone telling me “Ms. Charmaine, your friend is already here. Do you want to send him to your room or you’ll go see him here?” I promised him I will pick him up at the hotel lobby. So off I go.
When I opened the door, I felt some shiver and some cold air embrace me. I was feeling weak in short ANXIOUS.

My mind was battling - with what ifs and all kind of questions when you are meeting someone for the first time in flesh. When I arrived at the concierge, Handrei was smiling on me and I asked him where my friend is, he pointed to the direction where Emil was seated.  His face is smaller, his tall and I was fixated when he smiled. We embraced and he started teasing me “You’re so small” then punched him on his arms and started laughing.
That I knew, that I will enjoy my 10 days vacation. We don't have pictures on our first day together, even we were close "online", in real we are pacing each other, AWKWARD!
Day 1 survived.

We had our first taste of Balinese cuisine for breakfast. Snaps were not picturesque, I was being scolded already by the boss lol. I loved the egg station, you line up and tell the cook how you want your breakfast eggs prepared. I loved omelette with plenty of onions, tomato and fresh paprika with no salt. Yums!

On our Day 2 (Friday), we availed the free transport going to Kuta beach and discover like a local.
Kuta beach is not appealing, some trash scattered shoreline. There are many peddlers bugging with their services. We keep on declining politely.  When we felt thirsty and hungry, we bought these two big coconut for IDR 100,000 for two (Php 370+), it was expensive but I told Emil, the money we gave was a help and might be a food for the table for this vendor. We ended up eating at a local KFC. I didn’t like their version, no gravy and the chicken was not “finger licking good”. Emil ended up eating the rest of my food as he didn’t want wasting money. (Crushing on him more lol). We continue walking until we reached Beachwalk Mall, roam around and decided to go home so we can sort out our Day 3 & 4. We have agreed to have free day (no itinerary)  from Day 1- 4. Our tour starts on Day 5-7. Unfortunately, Bali was raining cats and dogs. We were stuck inside our hotel room on our Day 7, but we had quality time and some little petty fights because of my kaartehan haha

First picture together. A year after talking over that one whisper post.

About 10 minutes of walk we reached Beachwalk Mall. I like the aesthetics of the mall, it’s upscale and al fresco. Chinese New Year and Australia Day were the events being prepared. We wander around and of course some snaps.

On our Day 3, continue to check out the Kuta and Legian areas. We went out after breakfast and this time I think we were more comfortable to each other and adjusted to each other. Emil as travel buddy is one of those you will like; he has no hang ups and calm. Guess what our first stop that day?  Discovery Mall hahha. Well, it was very humid at that time. It's like summer! I realized after I am not in Philippines, my body was anticipating of cold breeze. I think Bali is copying Australia’s season lol  (it was summer in Australia during those months).

From Day 2 we went east side of Kuta, this time we went west side, Kuta’s breakwater is clean and no unpleasant smell.

As we continue our walkathon, we were greeted by a local in uniform and asking if we are travelling as a couple. I didn't sense danger from this stranger but seems like it is very same as my Boracay hotel presentation (https://trackthattravel.com/travelblog/1059). Emil was the one talking to the guy and inviting us to their hotel for a tour, free dinner by the sea and a chance of winning a fabulous prize (my eyes glistened haha & I think Emil noticed it), we will be send back in Kuta for free once we are done. Since we don’t have really plans that day (except clubbing later), we decided to come along... Long story cut short, we got 2 t-shirts, 7 day complimentary hotel voucher (2 years expiration). I felt like a lottery winner!! I can't stop thinking about it and looking forward for the next holiday.


Fast forward today, I can't vividly remember the folllowing events, when I am writing above entries, I was full of hope and love that the relationship will progress...
I was writing it on the month (2018 and 2019, we met and the culmination).

I don't really want to finish this blog but thinking how I was so eager to finish, composed my thoughts, upload pictures. might as well right?


NOTE: After publishing this on January 2019, someone made a fb troll account of mine and added his "connections" (he has no fb since January 2018) and posted humiliating stories. The account was removed and nowhere to be found. I was able to trace the footprint of visitors and guess what where the most traffic came from?

Update April 28, 2021. If you wanna know what happened of our story, we didn't succeed.
The guy has married in January 2020 and I only found out about a week ago. It was his mother, according to him was against of me or the relationship. The guy can't stand up for it or maybe he was just not into it and this was just a bachelor thing. But for me, I have loved, cared and genuine. I could have done a lot of crazy things, but if only he was honest, transparent and respect someone's time and feelings, there's no resentment from me.
I still pray and wish him all the best and if our paths meet again, I'll still want him to be lifetime friends.

Now, if you will ask me "Z, are you going to do it again?", I might or might not. Depends on what my conviction at that time.

Add puregarden to your subscriptions feed