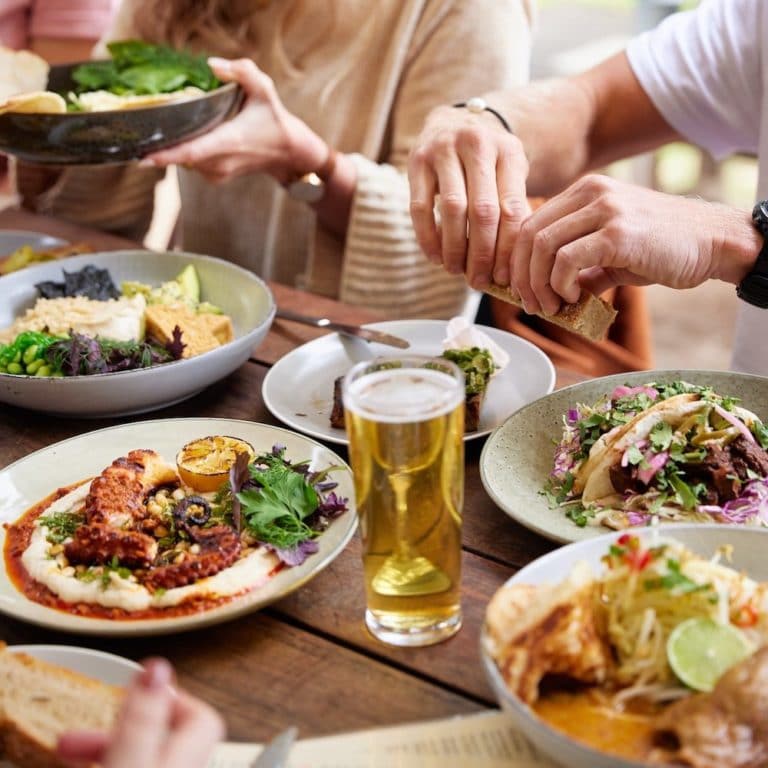 A cheeky trip down south just isn’t complete without a long, easy afternoon at one of the Margaret River region’s tip-top breweries. Check out a couple of our favourites for your next weekend away:

On the bank of the river and nestled amongst the trees just outside of town, Margaret River Brewhouse is ticking a whole lotta boxes for us. As well as their pretty nifty core and seasonal ranges on tap (including some exciting collabs with other WA legends), their food menu manages to keep things both interesting and crowd-pleasing – with treats on offer like a cheeseburger roti, beer-battered mackerel, or a lemon ricotta starter served alongside burnt honey and flatbread.

If you love your beers frothy and your faces friendly, a pop-in to Beerfarm should be high on the list. An independently owned Aussie brewery, their focus on sustainability and working with the land is only matched by their emphasise on good times and great beer. They sling some serious lunchtime eats too, and there’s always something going on for people of all ages.

Just down the road from Margs you’ll find the unassuming town of Cowaramup, a place that’s very quickly becoming as essential as the rest of the Margs region, and the Brewing Company is a great first port of call. The brewpub busts out a bunch of hearty beers, while the kitchen dishes up equally hearty feasts.

If it’s sweeping down south vistas with a beer in hand you’re chasing, Eagle Bay Brewing Co. has it in spades. They’ve also got a great, unassuming lunch menu, friendly staff who’ll happily walk you through their brew selections, and a simple kids playground to keep ’em occupied.

Slinging beers inspired by the Indian Ocean and a love of WA, Black Brewing Co. has made big leaps since their humble beginnings out of a Perth backyard. Now based in Wilyabrup, head there to sample their refreshing brews – and maybe a snack or two while you’re there. The menu features bites perfect for a long afternoon with a couple of beers: think honey sriracha buffalo fried chicken, lager battered fish and chips, or some refreshing WA cured salmon ceviche. While you’re there, you can also check out Dune Distilling Co. if you’re more into the spiritual side of things.