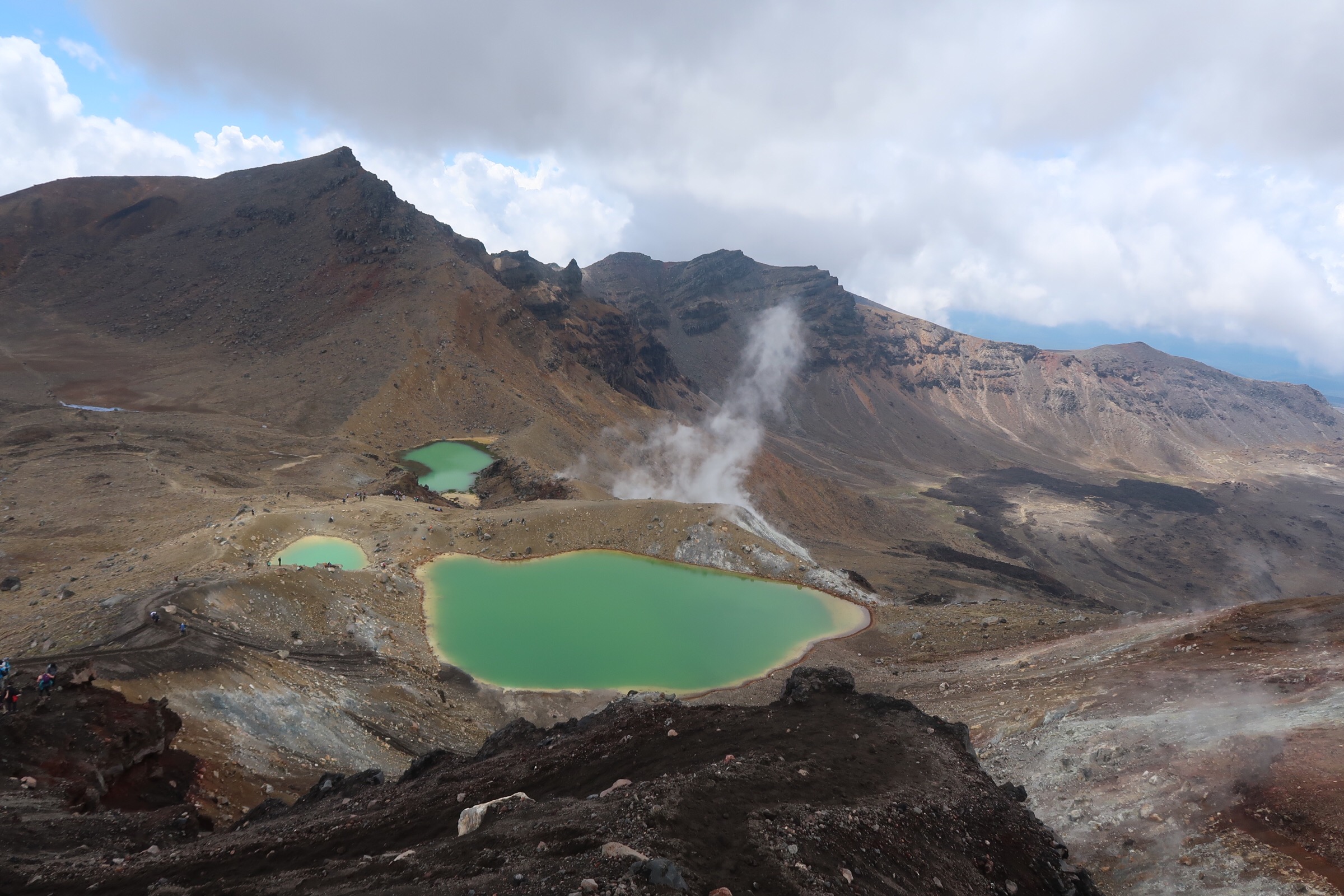 Deciding on whether I should sign up to the Tongariro Alpine Crossing or not wasn’t easy for me. I saw some of my new travel mates that had posted photos on social media about their Tongariro Crossing experiences with a mention of 7 hour and 30 minutes attached to their description (7 HOURS AND 30 MINUTES?!), my eyes bulged out of their sockets and I threw my hands up in the air whilst thinking, “fair play guys, but that’s not for me.” I’m not afraid to admit that I’m not the fittest person strolling on Earth and I honestly didn’t think I was capable of conquering the big T. I must say, the scenic photos were already urging my mind to think differently, but being the strong minded person I am, I stuck with the, “it’s not for me,” mentality.

I was snuggled up whilst sitting on my window seat on the Kiwi Experience coach listening to our passenger Spotify playlist that was put together by our guide, Guy. He stopped the music and began to tell us about the activities available to us in Taupo which included: sky diving, a sunset & pizza boat trip, parasailing and the Tongariro Alpine Crossing hike. I was sitting directly behind him and I was very quick to pass the sign up clipboard on to the next passenger. When the music resumed, I tired to get back into it. Trying to get into music isn’t a usual thing for me! I’m usually right in the zone when I hear a good beat! But at that moment I had Tongariro on the brain!

I had already been finding the short scenic walks in New Zealand quite tricky, so the fact that I was still thinking about possibly adding my name to the clipboard for a 6-8 hour hike was beyond me! I couldn’t ignore the fact that a part of me wanted to accomplish this. I knew it would be a challenge, I knew I would love it and hate it at the same time, I knew that if I did complete it I would feel proud (as well as relieved). As the clipboard came back around, I got hold of it before it got back to Guy and I signed myself up!

The transport picked a group of us up at 5:20am the next day. It was a 2 hour drive from our hostel to the starting point of the hike. On the way there I reread messages from my other half whilst listening to music until my phone battery expectedly died. I thought I would have been snoozing at that time of the morning, I guess the excitement and nerves were more than kicking in. About half of the Kiwi E squad were on board. Nadia, Lisa and I had already made a pact to stick together, take regular breaks and enjoy the experience to the max. I had my snacks, lunch, 3 litres of water, my best friend’s camera as well as my nerves at the ready. I was all set (well, just about).

We arrived at the start of the Tongariro Alpine Crossing at 7:30am. The three of us did a quick toilet stop, gear check and exchanged words of encouragement before setting off. The start of the trail was like the beginning of a great movie: it left a long lasting impression and created excitement for what was yet to come.

The three of us reached the part called “the Devil’s staircase” it has an uninviting name for a reason: it was a tough obstacle to defeat! Although it felt great to overcome that section of the hike, Tongariro Crossing was taking its toll on me. I was damp because of sweating, I had a slight twinge in my lower back and my calf muscles were crying for a long break. The scenic views worked wonders on those factors. My eyes became spoilt by my surroundings. Pain and sweat was no longer on my mind.

This hike definitely had its ups and downs, not just because of the nature of the trail itself, but because of the physical and emotional demand it came with. The part I found most difficult was the steep, never ending slope that I very ungracefully stepped/ almost slid down (I felt like Bambi, who knows what I actually looked like!). I nervously watched others fall on their butts and one lady managed to full forwards onto loose rocks. I found all of this very unsettling, but I actually felt a lot better after I took my first drop backwards. It reminded me that I am human and that it’s ok to fall as long as I get back up.

After making it down the slope, the eggy sulphate smell combined with our setting was indescribable. Seeing the three volcanoes with different characteristics married with vibrantly coloured lakes, assorted rocks and moody candy floss clouds gave a whole new meaning to natural beauty. I felt like the worst of the hike was over and the rest would be easier to manage from that point onwards, a little presumptuous of me, right?

The hike continued to be visually stimulating and the trail seemed to be a lot kinder on my mind and body compared to before. For some strange reason the three of us had assumed that we were a lot closer to the end of the trail than we actually were. We realised the reality of our position when we reached the lodge. Our facial expressions were exhaustedly shocked. One of the sign posts stated that we had an estimated 1 hour and 30 minutes left! Although we took regular breaks, ate lunch and drank water frequently, the hike had been extremely challenging. So challenging to the point we had built up a false hope of it being over shortly. Reality check completed. It was time to stop whining and complete the hike!

I clumsily rolled my ankle whilst stepping down on to a mesh type fixture on the path. I stopped briefly to review the situation and apply some numbing cream that Nadia had at hand. The people that were passing had stopped to make sure that I was ok and were ready to step in. I reassured everyone that I was alright and able to continue - and that I did.

The weather clearly was not on our side at this point, a light drizzle gradually turned into heavy rain as we entered the rainforest. Mud. Rain. Exhaustion. This is not what I had invisioned for the end of the beastly hike. I kept mistaking white breaks on the trunks of trees for our transport - that false hope was kicking in again. I just had to laugh at myself! The rainforest wasn’t as visually engaging as the rest of the hike, everything started to look the same and the heavy rain was making it hard for me to enjoy being in the moment.

Both Nadia and Lisa soldiered ahead and occasionally looked back at me to make sure that I was nearby. I was as ok as I could be and sooooo ready to see the end of the trail. Right, left, right, left… many muddy steps later, I had made it!

The Tongariro Alpine Crossing took around 8 hours in total for me to complete, (that’s including many short breaks and a lunch break). The feeling of relief and pride was a lot greater than I had predicted and my smile went from faded to highlighted!