5 ways travel has changed my life

5 ways travel has changed my life 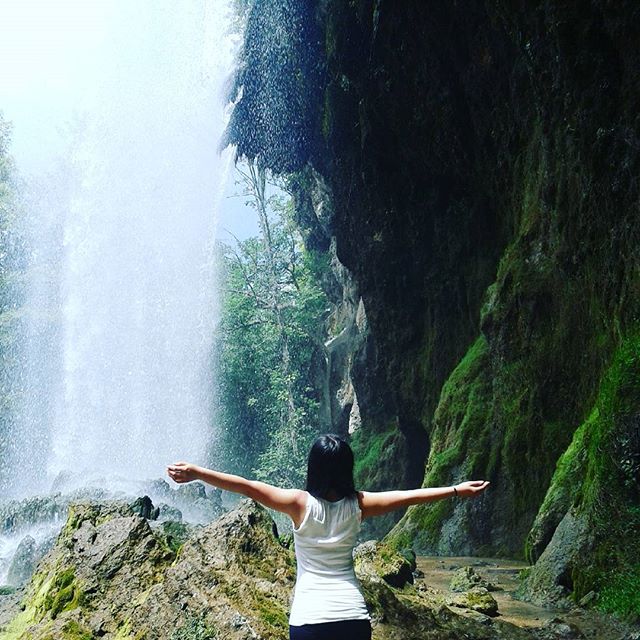 I am a girl with two culture: Vietnamese and Hungarian, so there was time I questioned myself "Where am I from?". It was even more awkward when people asked me this question and I didn't know what to answer. I couldn't say I'm Vietnamese or Hungarian, so I came up with the idea and told them "I'm originally Vietnamese, but I was born in Hungary." When I accepted the fact that there are two cultures in me, I started to open up to the world. At the age of 19 without any knowledge about the world, I signed up for a J1 program to the USA for 3 months all by myself. Since then I started to travel alone as well. I have to say that was one of my best choice to hit the world all by myself. Here are 5 reasons how solo travelling has changed my life:

I worked at a hotel in Hot Springs, Virginia, which is literally in the middle of nowhere. Around the hotel you can only see trees, forest and green grass. There is a waterfall which takes 2 hours to go there by bicycle. It was one of my biggest wish to see the Fall, but it was hard to go with anyone since our working schedule never matched. So one day I rented a bike and rode to the Fall. It took me 2 hours only to get there. The road was full of downhill and uphill. I couldn't ride the uphill so I walked on those parts. The sun was shining strongly too. I was sweating and tired, around me there was nothing but green grass and some cow and horse. After two hours I arrived and stayed there for another two hours to have a rest. The way back to the hotel was the same exhausting process but I was lucky when a hotel bus shuttle driver saw me and gave me a lift back.
When I arrived back, others asked me what I did on my day off and I told them I went to the waterfall by myself by bike. All of them looked at me with big eyes and asked me "Are you crazy?".

Even I couldn't believe myself. I have never been a sporty person, but I made it. I realized I am the only one who know myself better than anyone else. People couldn't believe me being able to ride a bike to the waterfall by myself, because they didn't know me. I never doubted myself even for a second whether I could do it or not. I was exhausted, it's fact, but I knew I could do it. And I made it. I realized we can do everything in life. Everything is possible. The question is "Are we willing to do it?" "Are we willing to invest energy and time in it?"

2, We are the one who can protect the environment

Last December I went to Las Vegas, Grand Canyon and Los Angeles. I was fascinated by these places. In Las Vegas you can literally see Eiffel Tower, Brooklyn Bridge, Colosseum, Venice, Sphinx. I could feel how much effort they put into building that city and no wonder it became one of the most popular one. I realized human is the one who build the wonder. That proved one more time that we are capable of anything.
To Grand Canyon I went by a tour bus and they turned on a radio tour guide. I don't exactly remember what they said, but they expressed how much effort they have put into maintaining Grand Canyon, so it can last long.
When I was at the beach in Los Angeles, there were boards saying not to throw trash on the beach, we should take care of it to be a clean, beautiful beach to enjoy.

By these experiences, I realized we are the one who can build and protect our environment. Without our effort environment would die. Las Vegas, Grand Canyon, the beach wouldn't be able to exist for such a long time if we don't put in an effort to maintain them. So I become more conscious about protecting our environment, our nature. Beside not throwing trash on the street, I pay attention more not to waste neither food nor water. I'm convinced that by saving our environment, we are saving our own life too.

3, Family is our most precious value

I am the type who always like to be by herself. I don't really like holidays, where family can spend time together. This is also one of the reason I like solo travelling. But this time since I spent Christmas and New Year abroad beacuse of a break up without my family, I realized my family is the only one assured source I can rely on. Since the day I was born my parents, my brothers took a really good care of me. Other people might leave me, but my family members never. We all share the same blood, so I learnt to appreciate them and believe in them more. In the end our family is the one who sticks with us throughout our lives.
I am also convinced by my mother's effort and trust she has invested in me during these years. It's not an easy decision to make to let your daughter travel to the US all by herself. She let me go because she knew that's how I can grow. But it was a huge courage from her to do so. So I respected my parents even more after I realize how much they sacrificed for me and how much they worried about me. It's true that parent's love are the biggest and most honest one.

If we watch news or read newspaper, we can only read about bad, negative events that's happening around the world. Therefore we think that the world is a dangerous place with cruel people. But the reality is different.
After I finished my contract at the hotel, my supervisors asked me where I travelled. I told them to New York and Washington by myself. They were so surprised and scared that they advised me to get a gun. I was surprised too, since carrying a gun in my country is a taboo. I didn't get a gun, but what was more important was that nothing happened to me. Yes, there was crowd in New York, but no one had intention to hurt me. If I had to ask something from someone, they even helped me.
In Hot Springs there was a shop 20 minutes by walk from the hotel. I needed to buy grocery so I walked there and back. On my way back I had a lot of stuff and it was heavy. A woman suddenly stopped and offered to give me a lift back to the hotel. Out of nothing someone appeared to offer taking me back, I was surprised, but I trusted her. And of course nothing happened.

Through these experiences I realized people are not as bad as they are said through media. Nowadays I was in an event where the topic was connectivity. We had a practice where we paired up with someone else who we didn't know before. We had to look into each other's eyes for two minutes without saying anything. At first it was awkward. It is explained that it is because we focus on our own stress. We think whether we look beautiful, whether the other person likes us. We focus on ourselves, our ego leads us to turn into survival mode, so we only want to escape from the situation where we meet a new person. Then we were instructed to focus consciously on the beauty of the other person. And yes it was much easier to look into their eyes even for a longer time.

Through that exercise I realized why we think the world and people are bad. First of all we don't know the reality so we make up something in our mind and believe that is the truth. Second we let our ego, our prejudice to lead and control us. So when we are in a different place meeting different people, we think that they are weird and we just want to escape. But in reality if we put effort to focus on them a little bit more, explore and recognize their inner and outer beauty it would be easier to connect, to talk, to understand each other. When everybody can understand the others, we automatically make a better world around us. So what travelling made me realize is that we are all human and we have good inner personality. If we trust them, they will also trust us and reversed.

5, Everything has its own price

I am obsessed with money. The moment I earn, I save. I can hardly spend money on anything. There was period of time I even starved myself just to save up money, even though I had enough. I work really hard and stressed over money a lot. But at the same time I also like comfort. When I first heard about "how to travel cheap" I was really excited and wanted to throw myself into the world right away. Little did I know that I also had to give up comfort. Instead of going by bus, aeroplane, I would have to hitch-hike. Instead of having my separate room with private bathroom, I would have to share it with someone else.

It sounds really good to travel cheap, but that comes with the price too. When I tried to find accommodation on couchsurfing, I had to write to many people and I still couldn't find a place to stay. I realized I don't pay with money, but I pay with my time and effort. The time it takes to hitch-hike, the effort it takes to get in contact with a lot of people to find a roof over your head, those are the price in order to travel cheap. If you like to stay in hotel, then the price is obviously money. Therefore money, time, effort they all share the same value. Whatever you do it comes with the price. What you can do is to prioritize, what you need the most at the moment. If you like comfort, pay the money. If you want cheap travel, pay the effort and time.

After I realized this I wasn't as obsessed with money as I was before. I don't waste, but I spend them more freely. If I'm hungry, I don't hesitate to buy myself a sandwich during the day. If I really need a service or a product I buy it. Of course I need to be careful not to spend too much. Before I buy something, I make sure I really need it. And I invest in a good quality product, since I can use them longer than buying a cheap one, but have to change it after a month.

In the end, one of the most important lesson I learnt is to appreciate TIME. It's not exactly true that time is equal to money, since you can't earn back time. Once it's gone, it's gone. So I am learning to make the most out of the time I have NOW.

Add Travellergiang to your subscriptions feed