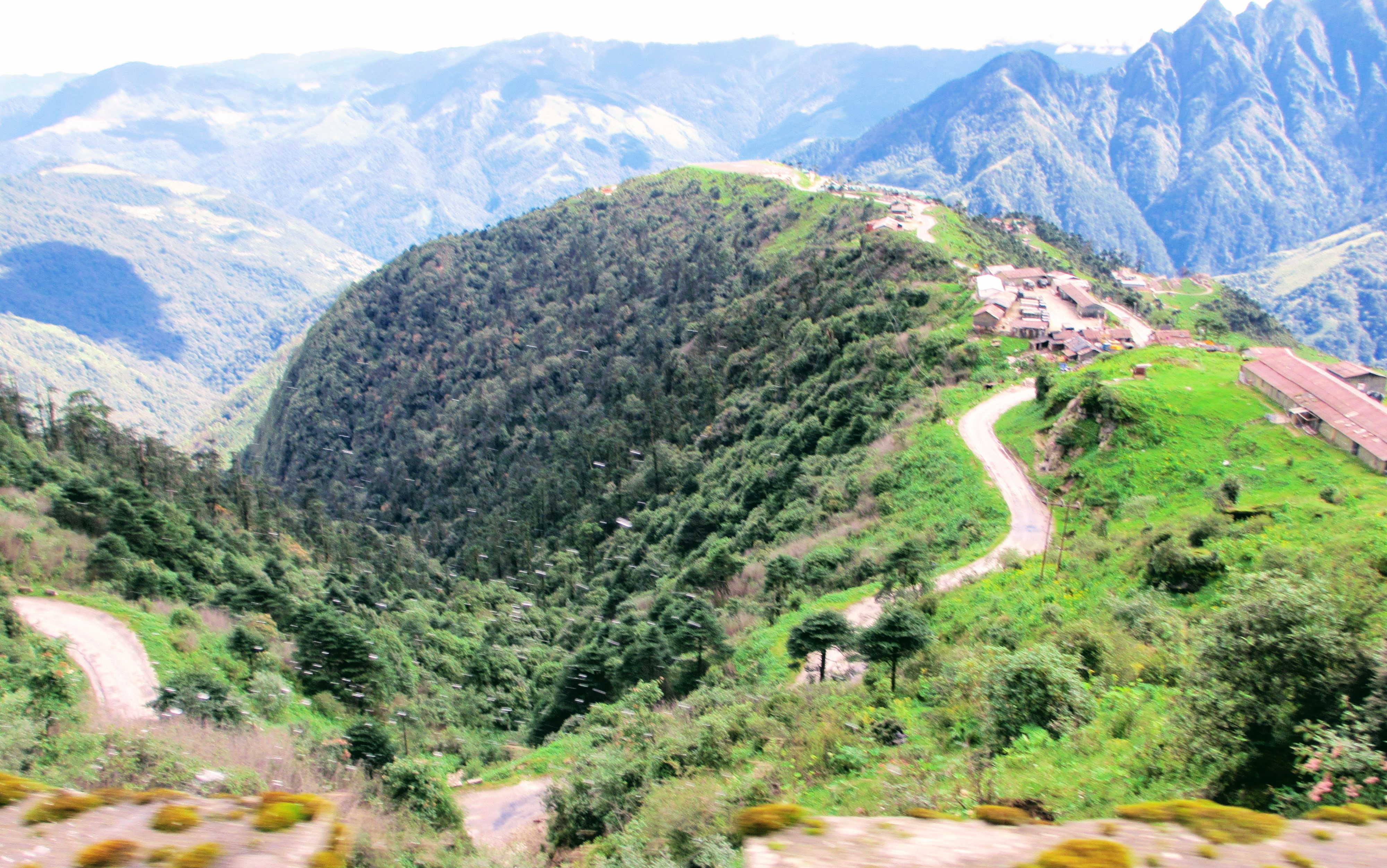 We woke up to a sun drenched morning the next day. The entire landscape seemed freshly washed by the rains of the previous night, having come alive with a renewed vigor and vitality. It seemed as if we were stationed on a hill top higher than any of the surrounding hills. And there was silence all around; a silence that lent the surroundings an ethereal quality, a silence occasionally broken by the rustling of leaves, a silence that seemed almost palpable.

Having exchanged our farewells we set out for our faraway destination viz. Tawang. Right after crossing the Dirang town we encountered roads that resembled rivers of mud, stretching as far as the eyes could see. Sange, jaws tightened and eyes peeled on the road ahead kept maneuvering the car through the slippery mud with remarkable dexterity. We hung on to the hand rails with all our might as our vehicle kept drifting between the double perils of the mud splattered roads on one hand and the hairpin bends on the other. The slightest lapse of concentration was sure to send us plummeting to the valley of death below.

Our first stop en-route to Tawang was a place called Senge, at an altitude of 9000 feet and offering spectacular views of the valley below. Here it felt as if we had drifted over the clouds – a valley of clouds that hid everything from mountain peaks to grasslands, trees and birds and touched our cheeks gently as we popped our heads out of the car. We continued moving uphill, passing by picturesque farming villages, natural water channels and grazing yaks and horses. We stopped at Baisakhi, another military checkpoint on the way and alighted for a while to stretch our arms and limbs.

After crossing Baisakhi, it was an even steeper ascent, with the track hugging the cliffs and snaking along the sides of the Himalayan summits. A thick layer of mist hung over the roads as we drove uphill. We were approaching Sela Pass; this was the same road taken by the Chinese army during the 1962 Indo-China war to descend as far down as the Baisakhi military camp. The mist descended even thicker prompting us to stop dead in our tracks, wondering if there was a curve ahead or if we were at a cliff. Visibility was zero; we seemed to be staring right into the clouds with nothing whatsoever visible below.

And suddenly the veil was lifted and there appeared a gateway with Buddhist inscriptions. We were at Sela Pass, where history and romance meet at 13,700 feet. At the height of the Indo-China war in 1960s, Sela was a local maiden who had fallen in love with Jaswant Singh, an Indian soldier. Both of them had put up a valiant fight against the advancing Chinese army, though eventually they were martyred. The pass was named after her.

It was cold and windy when we reached Sela and even with warm jackets on, the cold breeze seemed to tickle our bones. Lofty mountains with chiseled slopes surrounded the place and bright shafts of sunshine glistened like silver on the placid waters of the Paradise Lake. The quintessential Buddhist prayer flags in their myriad hues kept swaying languidly in the mountain breeze, lending the whole place an aura of timelessness. It was just us, and nature at its silent best.

Fourteen kilometers thence, we came across the war memorial of Jaswant Garh, raised to pay homage to Jaswant Singh of the 4th Garhwal Rifles. As we traveled through these remote lands, we became increasingly aware of the stories and legends that resonate through them. This brave soldier had hoodwinked the advancing Chinese army into believing that there was a huge military presence by firing simultaneously from different locations. He shot himself in the head with his last bullet and was beheaded posthumously by some infuriated Chinese generals. His legendary spirit still floats through the hills like a guardian angel. Soldiers of the Indian army guard his memorial with reverence. Everyone who visits Tawang must pay their homage at Jaswant Garh. Every traveler is also greeted with hot cups of tea and samosas.

Having gorged on the snacks at the army canteen, we started on the last leg of our foray into the Arunachal heartland. A two hours’ drive from there was supposed to take us to Tawang. We had been on the road for close to 10 hours; although reeling from fatigue, the incredible experiences of the whole day had left little room for complaint.

Our last stop before reaching Tawang was the awe-inspiring Jang Falls. We could hear the roaring waters of this majestic waterfall even from a distance but we had little inkling of what awaited us. The sight of the waterfall was breathtaking, not just for its height, but also for the sheer volume of water cascading down and creating a roar that reverberated across the hills.

Darkness was fast approaching and another grueling drive through rocky tracks finally brought us to Tawang. The lights of the city were blurred by the mist and the whole place bore the look of a sleepy little hill town. We checked into the Tawang Circuit House and retired for the night. As we went to bed we had the snugness of two voyagers who had taken a break from reality only to have stepped into the realm of the fantastic.