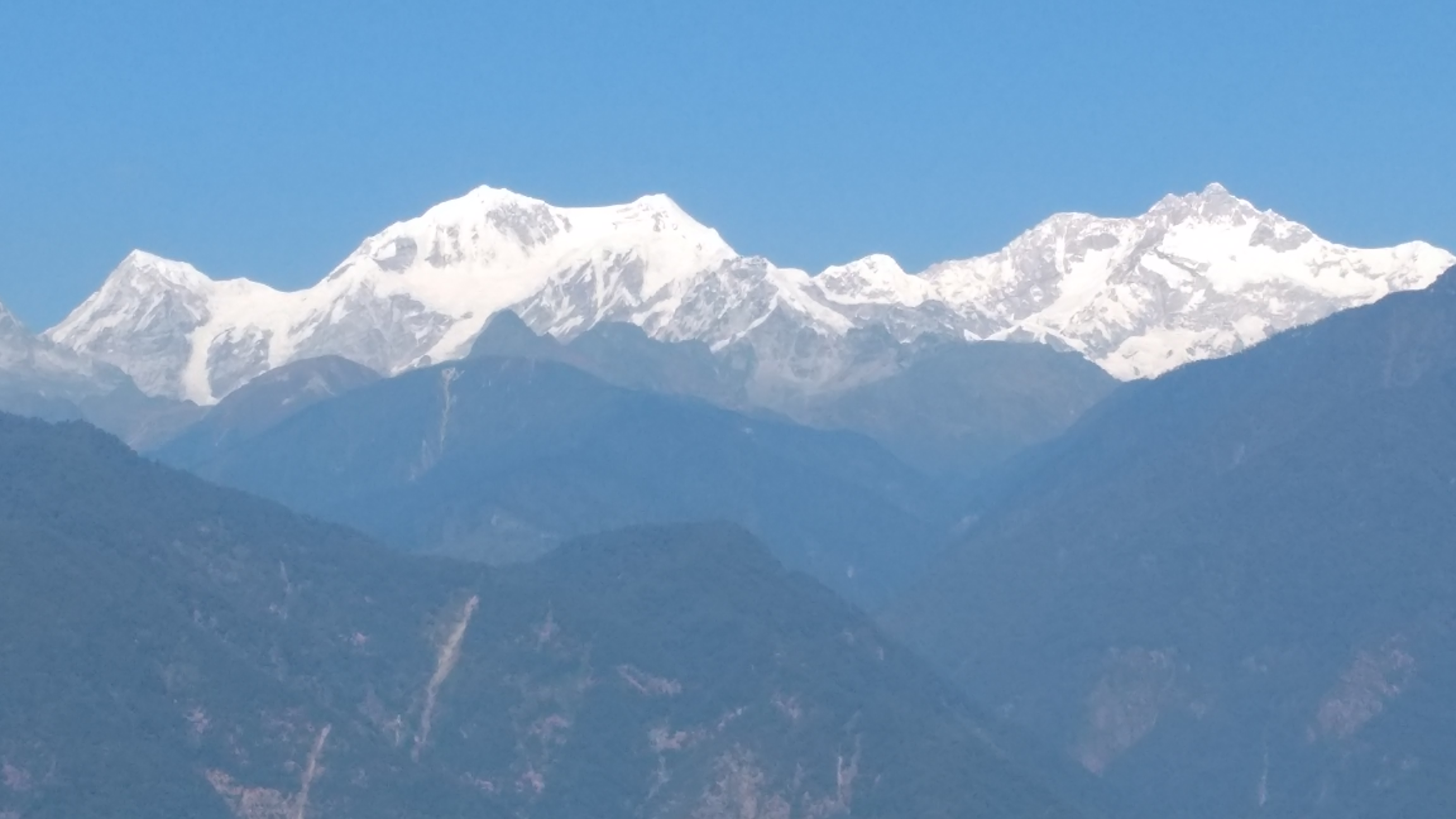 It was a long pending desire in my wish list to see the world's third highest mountain.Yes it was the urge to be a witness of seeing Kanchanjangha infront of my eyes.It is said that the entire range of Kanchanjhangha is clearly visible from the famous Tiger Hill at the time of sunrise.But instead of Tiger Hill, we chose Peling ( a town in the district of West Sikkim ) as we wanted to see the majestic beauty of Kanchanjangha in a serene place.
It was a back packing tour as we decided to go for the trip in just a day.We booked tickets for NJP (New Jalpaiguri) which has not been confirmed in a day.But it didn't stop our spirit to go for the mission. We bought general tickets for NJP and almost travelled 10 hours by alternatively seating and standing for the whole journey.This is the first time we travelled almost 600 kms in such a way but could not feel the pain of standing in a general compartment for such a long time.Yes, the whole train journey made us realised that nothing is difficult to achieve if we really want to be a part of our dream.We reached by 9pm in NJP. We could start up journey in night itself but decided to stay in hotel as we didn't want to miss the opportunity to see the beauty of road journey in day time.Next morning we headed straight to Kalingpong ( A small town in Darjeeling district) as we wanted to go Peling via Kalingpong.You will get shuttle from hill cart road which would take 3 hours to reach the beautiful town called Kalingpong.It was a very refreshing journey as the crystal clear sky, sunny light, clean roads, different types of winter flowers are all there to welcome you.You would be able to see calmness of river Teesta.Teesta is decorated with all green water and reminds you of any river of foreign country.This is the first time we visited a hill station in winter and I must say you will get to feel mountain in a joyful mood in this time which would brighten and charged up your mood.We reached Kalingpong by 1pm and finished our lunch with home made nice food at our guest house. We were keen on to see Kanchanjhangha from hotel itself but alas ! As our hotel manager informed it was clearly visible for the entire day from yesterday itself but the day we reached it was all foggy. However, taken a nap in sunlight at our hotel room was the best thing we could get in a cold afternoon. We started our journey for Delo (A beautiful tourist spot near Kalingpong)by 3pm. On our way to Delo, we have seen many tourists were doing para glading. As we started our journey a little late, so we had to miss this adventurous sport otherwise it was not possible to cover Delo. This is a beautiful park covered with pine trees.Sometimes you would feel that you have come to a foreign location. All the different range of mountains are clearly visible from this place. We were almost freezed due to cold wind.It was all dark cold night when we reached Kalingpong after covering Delo.There was not even a single light in the road towards our hotel.We fogot our route while walking but somehow managed to return safely. All I can say that it was all an unusual night experience.
Next day we headed for our much awaited trip to Peling. You can book direct cab from Kalingpong to Peling or you can break your journey via shuttle.We booked a cab till Jorthang as we failed to reach our shuttle on time. Condition of the road was very pathetic due to landslide.But the way the driver has taken us to Jorthang was commendable. In one side there was a long deep fall and in the other side there was giant rock hard mountain.Sometimes you would feel that you have come out on a daring ride.Finally we reached to Jorthang by 2pm. Then it would take another 3 hours to reach at Ghazing. Sometimes the picturesque road journey would remind you the roads of Ladakh.At last we reached Gazing by 5 pm .You can get shared cab which is easily available in Ghazing from which shuttle would take half an hour to reach Peling. The journey was so hectic and tiring that we immediately fell asleep soon after finshing our early dinner.
On the next day, we got up early in the morning with our main intension to see the Kanchanjangha. But again we could not see due to cloudy and foggy weather which reminds me the story of Rabindra Nath Tagore. It is said that Rabindra Nath Tagore went to Tiger hill for 7th times but couldn't see the beauty of Kanchanjangha for once.
We decided to go for local sightseeing in Peling which includes Kanchanjangha water falls, Rimbi water falls, Hanging bridge, Khechiperli lake, Monestry and Helipad. It was an wonderful experience while going to Khechiperli lake. This is a wish fulfilling lake.The place is so serene and beautiful that it would lead you to the door of heaven.
It was so scary while walking on the hanging bridge as sometimes you would feel of falling off. While coming out from the bridge, we observed that some tourists were taking some food and drinking some liquid in pink color in a roadside hotel.We became more curious and asked our driver for the name of the dishes and drink.The young driver informed us to try organic wine made of Rhododendron and Nepali thali. It was a lovely experience having such authentic local cuisines.

In Kanchanjangha waterfalls, we tried for zip liner twhic was completely a new experience to us.After covering all these points, we went to Monestry. It was a prayer time when reached. This is the first time I have seen so many monks under one roof of praying and chanting in a rhythmic way. You would feel so much solace and peace not only in the place but also in yourself.
Our last destination of the today's journey was in Helipad. This is the big ground area of landing off for the helicopters. You can see the beautiful view of Kanchanjangha from this place. We almost covered all the places of Peling in a day. But still we were refreshed and engergised that we come out for evening walk and had some delicious momo and safaley.Walking on a cold dark night in an unknown hill road had given us a different kind of experience which perhaps can not be described in words.

We literally prayed and slept on a hope that Kanchanjhangha would be visible on the next day. We got up early and yes, our hope and prayer made us smile as it was all a bright sunny dayðŸ˜ƒ.
We rashed immediately to the balcony whether Kanchanjhangha could be visible.You won't belive but yes slight range was visible.We just came out of our hotel and astonished to see the mesmerizing Kanchanjhangha was standing in front of our eyes. For sometimes, i just couldn't belive my eyes whether actually i see such amazing creation of nature. I felt the joy like the way our dream has come true. It was so beautiful covered with all white snow standing just infront of my eyes. Visibility of Kanchanjhangha was so clear to us that you would thought it's situated just the opposite of your next mountain range and you would reach there easily.We were amazed to see such breath taking view of Kanchanjhangha from a place called zero point near our hotel. We seek for the peace and purpose of our existence throughout our life. Seeing such creation, it would made me feel the essence of actual meaning of life and inner peace. One can just spend the entire day watching this amazing creation.This entire experience was like a heavenly to us.
After seeing beautiful Kanchanjhangha, now the time is to go for to see mesmerizing Ravangla ( small town of West Sikkim). So,we started our journey by 10 am. All the way from Peling to Ravangla was a special treat to our eyes as we just could not take our eyes off from the mesmerizing scenic beauty. On this way, we had some great momo, chowmein and coffee in a road side restaurant from which the visibility of Kanchanjangha was so clear that we could not stop ourself to click loads of snaps. We reached to Ravangla by 1 pm.You would be able to see a amazing Buddha park and a monestry. The place was so calm and serene that horn is not allowed in this area. Buddha park is a nice place situated in the middle of the town and covered all the way by the mountains. There is a huge statue of Buddha besides which Kanchanjangha is being seen. The lovely view would want you to take to this place again and again. We covered the entire place and it took almost three hours. We started returning our journey by 4 pm. It was already been dark by the time we covered half of our returning journey to Peling. Needless to say it was a thrilling experience travelling in the night through mountainery road. But the best part was to see thousands of lights in the houses situated on mountains in the night which would resemblance the stars on the sky. Sometimes you would feel all the stars have come down to the earth.
Next day was our returning journey to Kolkata. While returning from Peling , this is the first time I realised that the  Kanchanjangha , mountains, roads, flowers all the non living creatures have become living creatures to me and they were feeling the same pain the way i felt while leaving the place.
We came back with some unforgettable memories and realisation which we can ever dreamt off.


Add Rituparna to your subscriptions feed