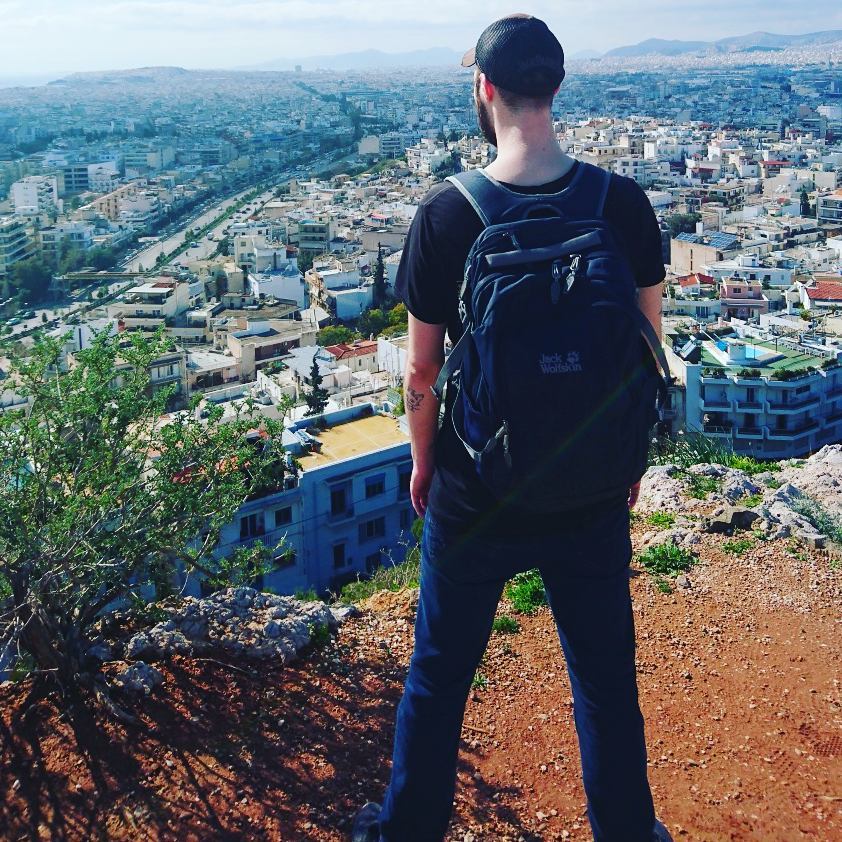 Athens is known for the Acropolis; from the Greek words 'summit' and 'city' or city on the mountain top. If you love to hike rocky terrain under perfect blue skies, then Athens is ideal. I chose to travel here in search of a city break, but upon arrival I quickly discovered that nature and sanctuary from the crowds were closer than expected.

We arrived at 23:30, with no hotel booked for that night, so took refuge in the 24 hour McDonald's. I downloaded an app that plays sounds to help you sleep in order to drown out the awful music before laying down on a bench. By the early hours, we were all decided that we weren't going to get much sleep and found ourselves a taxi into the city centre. On the way, I did some research and discovered that we'd arrive just before sunrise and looked up the best hill to watch it from. Google told me Aeropagus.

Aeropagus Hill
We followed Google maps out of the city centre and towards the Acropolis. We climbed up rocky, uneven stairs in search of higher ground. It was before shops or cafés were open, but a mysterious man stood in a doorway and directed us before we'd even asked. Whether this was the ghost of Socrates or just a regular man with a beard, we will never know, but we hastily headed upwards in search of a view. When we arrived at a good vantage point, I felt the exhaustion leave my body as I took in the early morning spectacle.

We hadn't quite found the right place, but this was good enough to get a sense of this vast city. A while later, we reached the summit of Aeropagus, which lies near to the entrance of the Acropolis. We climbed these rocks before we'd even arrived at the hotel and were the only people up there.

Filopappou Hill
One of my main reasons for coming to Athens was my interest in philosophy. The first real philosopher, Socrates, was imprisoned and executed in Athens, but not before teaching Plato, who went on to teach the world. It is thought that Socrates was incarcerated in the rockface at Filopappou Hill, so we went in search of his prison.

While the prison was a great find and an amazing piece of history, I wasn't ready for where this would open out onto. We kept walking upwards (when it doubt, always go up) and found ourselves far away from the city, but overlooking it. From here, we could see huge sections of Athens, while being completely among nature. We observed the surrounding mountains and looked out over the ocean. We then decided we wanted to do two things: see the sea and climb even more.

The Acropolis
Now, the Acropolis is a hill in its own right, but I won't spend too long discussing it here. There's a ton of information online about the Acropolis and anyone who comes to Athens will find their own way up. However, it was while were up here that my girlfriend spotted a mountain in the distance and asked a member of staff about it. He said it was called Mount Hymettus and yes - you can climb it.

Mount Hymettus
This place is a little further out and a lot more difficult to climb, so be sure to awake early spend all day there. It's over a thousand metres tall, offering incredible views over the city. Start by getting the blue metro line to Evangelismos. From here, take the 224 bus and get off at the last stop. You can then walk past a graveyard and into the forest which leads to the top of the mountain.

This place is full of surprises, so if you want to experience them for yourself, stop reading now. After getting off the bus and walking through the woods, you'll arrive at the 11th Century Kaisariani monastery. This is where families and tourists take a lunch break and it offers some pretty good views. Don't stop for long though - there's a long way to go. You basically just have to follow any path which is going to the top and they are often painted with the word "up" on them (if you forget which way up is).

The first awesome find was a watchtower. I instantly decided to climb the wooden ladder and found two chairs and a window with a view over Athens. This is such a fun place to rest and take in the views.

From here, simply continue to follow the path upwards. After a couple of hours, we reached a road where the air felt thinner and cooler. A group of fellow hikers said they didn't think it was worth continuing on, since this was close enough to the top and had amazing views of the city, surrounding mountains and the ocean. We decided it wasn't worth going all this way not to reach the summit, however, and continued along a winding tarmac road. It was easier and less steep than the rocky, uneven footpath, but took a much longer route. It was worth it though because we discovered a massive abandoned building.

This seemed like some kind of old military base, with endless rooms, roof access and a basement, although I can't find any information about it online. We explored the whole building, which was a little creepy but at least we weren't the only ones there. The views were somehow more amazing here and it was so cool stumbling across this place with no idea it would be here. This is why I suggest limiting your research. I doubt a place like this is as fun if you've pre-planned to visit.

It was only 20 minutes to the top now, but we were tired and achy. When we finally arrived, we found the summit sealed off by a locked fence. We sat and rested, watching people arrive on bikes and by car, only to be met with the same disappointing fate as we were. At least we'd reached the top (near enough). This amazing mountain, with its ancient monasteries, guard towers and abandoned buildings is just a stone's throw from Athens city centre. I wonder if Socrates walked it and felt the same urge to examine life as I did?

Oh and on the way back down... we found a wild tortoise.