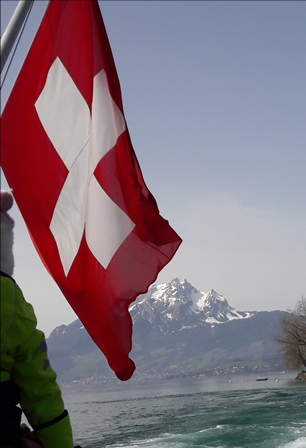 Where do I even start to talk about Switzerland?! From alpine views, to lake views; villages, cities, daffodils, cheese, chocolate and friendly people - it has it all!

It has always been one of those places that I looked at Google images of (and now instagram!), and dreamed about going to, but didn't think I would ever get there - especially after hearing about how expensive it is (which is all anyone I know has ever said!).
And I'm sorry to say guys & girls - it’s incredibly true! Switzerland is ridiculously expensive (when a coffee here costs more than the price of a standard beer in NZ!). I guess it is all relative though as the Swiss people I met said they earn good money in their jobs; however for someone like me travelling on our little kiwi dollar - it doesn't go far!

I am very grateful for the fact that I had incredibly kind offers of places to stay as accommodation is also quite expensive here.
My first stop was Zurich (would you believe that Zurich was the cheapest out of all of Europe & UK to fly into from NZ?). Here I stayed with my German pal Silvia's friend Stefanie F. She kindly offered her comfy couch in her lovely apartment, showed me around Zurich and introduced me to Swiss cheese fondue. It's a big City that is surrounded by lots of gothic-looking buildings, cobble-stoned streets and a beautiful lake with picturesque mountains in the background.

It is easy to imagine in Summer that the lake area would be even more popular for locals to hang-out at. Even on the cold spring evening that I was there, people still gathered with their open bottles of wine/beer and just chilled out together. (I had forgotten that it is legal to drink alcohol in public over this side of the world!).

From Zurich it was onto Bern - here I spent 2 weeks volunteering through www.workaway.info assisting a very inspirational man who suffers from Parkinsons. He is one of the most determined and creative people I have ever met and it was an honour to be able to live in their family home and experience the Swiss way of life; including many amazing home-cooked meals as well as being able to enjoy Bern as a local. It is an easy City to navigate and although small, it has a certain charm about it and I would highly recommend taking a visit - only 1.5 hour direct train ride from Zurich and slight cheaper (only slightly!).
Don't forget to check out The Kindlifresserbrunnen (Swiss German for Child Eater Fountain); A random statue of a man eating a sack of babies in the City Centre. There are a few theories as to why it is there - you can decide for yourself here: https://curiosity.com/topics/why-is-that-swiss-sculpture-eating-a-sack-of-babies-curiosity/

I was earged by the family to take the weekend off to explore more of this beautiful Country and from Bern it was easily accessible by train to go to a place called Interlaken; so I booked the train and headed South.

I met a lovely Aussie named Anna at the platform as we both noticed the fact that the train name had indeed swapped platforms only a few moments before it was due to depart! We arrived to Interlaken West and went to the information booth for some info on how to best spend our day here and were advised to walk to Interlaken Ost to get the train from there to Lauterbrunnen. Anna's offline map, ended up with us walking the wrong direction for a good 20 minutes, surrounded by the strongest small of horse manure I have experienced in a long time! (side note: this is not the first time I have let an Australian lead me astray ha!).

We finally caught glimpse of the train platform area and headed towards it to board the train just in time to get to Lauterbrunnen. From there it was an amazingly scenic Cable Car up to Murren. Seriously, the pictures of this place dont do it justice; absolutely stunning! Definitely a highlight for me with picture postcard perfect views of snow-capped mountains and cute cottages. Lots of skiers going up for the last ski-run before the snow melts.
If you wanted to, from here you could also go up further to Jungfraujoch (aka 'the top of Europe'), however for the extra cost, the views from Murren were just fine for me.

Anna and I finished our day with a local lager in Interlaken (which is quite possibly also THE most single expensive beer I have ever consumed!). Then I caught the train to spend the evening in Thun (prounounced Tun), to visit new friend Stefanie B who I had met in Ho Chi Minh, Vietnam in December.

She had literally just moved into her new apartment earlier that day and it was her 30th birthday the next, so I stopped by to help celebrate! The view from her apartment looks like something out of a fairytale - so pretty with the mountains and a glimpse of the castle. It was nice to see another little town in Switzerland – stunning scenery and easy to walk around. Some great cocktails were had at 'Atelier Classic Bar' by a bartender who has won various awards (Again, not cheap, but well worth it for at least one!).

After a couple of drinks and a quick train ride back to Bern, I came out of a different exit into the main City Centre and proceeded to walk in the wrong direction for 15 minutes. Realising I didn’t recognise much of where I was and that after walking 12 minutes I should have been back at the house by now; I turned around and went back (and there goes half an hour - alcohol may or may not have been a factor on this occasion). I managed to finally get my bearings after a quick guessing game with a non-English speaking passer-by, and eventually back to the house by 1am!

The next day it was another early start to go to Lucerne (Luzern). 1.5 hour direct train ride from Bern. On arrival to the train station the Information Centre was closed (Sunday), so I went up to the main SBB counter and a helpful man helped me sort my day. I got the boat to Vitznau and then went up the old school Cogwheel train/tram up to the top of the Rigi Kulm. Another spectacular view although a lot colder than the day before in Murren at -3 degrees Celsius!

The public transport system here is very well organised. From trains, trams and buses - you can't go wrong and if you can't understand the language at the tram stations, you have the option to swap it to other languages, including English.  I downloaded the following apps to travel between further away places: SBB and Flixbus. They were super handy and you can see the cheapest fares at the touch of your phone. Even when you are away from wifi (or run out of data), you can still access your e-ticket for scanning - which also saves on paper wastage.

With Four main languages spoken, it was not a surprise when I met someone who could speak 9 different languages! Very impressive and puts our kiwi lack of language learning to shame! A lot of people here speak English and most wanted to practice with me, which I thought was nice and was happy to do, however this also meant I didn't learn much in the way of Swiss-German!

So I guess my main top tip for Switzerland would be to eat in and cook your own meals where you can and if you need to eat out, do so at lunchtime instead of dinner (supper) time. And, if you have a friend to stay with - even better!

For all you smokers out there, the cheapest thing you can buy in Switzerland is cigarettes, so it is no surprise that there are many smokers here. It was probably the main thing that was the most noticeable to me to be honest. It seemed like every second person smoked and getting used to the smell was something that I didn't quite adjust to.

The amazing scenery and the lovely people here far outway the negatives of the amount of smokers and the expensiveness though. If you can see even a glimpse of this beautiful place - do try to!