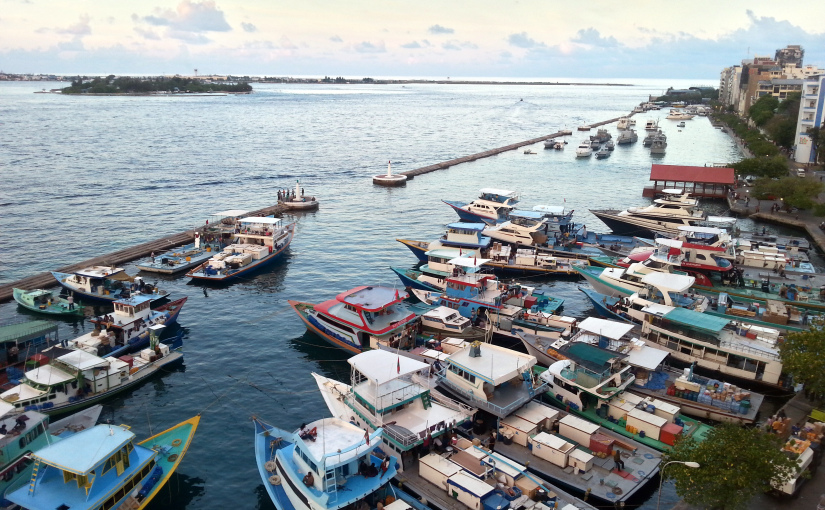 For those of you who have been fortunate enough to explore Male with our guide Maahee, on one of our popular walking tours, you will know the reason why he is referred to as a ‘walking Maldives encyclopedia!’


For those who have yet to meet Maahee or indeed visit the Maldives we asked him to share a few key facts about the Maldives and it’s history.

The Maldives is an archipelago of 21 atolls and a total of now over 1192 inhabited and uninhabited islands. I have not visited even half of them, so I have plenty of islands still to explore. Islands are spread from North to South covering 820km length and 130km width, with the ocean covering 90,000sq km. The islands are formed on top of stone crusted bed rocks which are called the coral reef islands; 5% of the world’s coral reefs are found in the Atolls of the Maldives.

The ecosystem in the Maldives is a subtropical area to the central equator of the world. From January to December the Maldives experiences a monsoon climate and the temperature of the Maldives is stable in between 24″ degrees to 33″ degrees centigrade. June and July will experience the heaviest monsoon rain showers across the region.

The Maldives is known to be the lowest altitude to sea level and the islands are under threat with global warming and sea levels rising.  President MaumoonAbdhulGayoom called upon the United Nations to unite for a global warming campaign for all low altitude island such as the Maldives. Whilst this remains an issue coral reefs bleaching and the crown of thorn starfish are additional obstacles that we face today.

I were born and raised asa Muslimand the country’s official religion is Sunni Islam. The Maldives is 100% Muslim and is believed to be one of the few countries in the world with this status. The practise of other religions is denied; being found doing to do so is punishable by law. According to the first settlement, the early civilisation were seafarers travelling across the continent of India and Sri Lanka, this is where the influence of the Buddhist religion is believed to originate from, The remains of Buddhist monuments can still be seen on some islands. The Islamic religion were brought by the Arab traderAlhafisAbullbarakaathulBarrbaree,who came sailing from Morocco in 12th century 1153 AD. Would you believe it took almost a century of time for the Islamic religion to spread across the country.

Whilst today we also speak English and mine is quite good, during early civilisation the spoken language in the Maldives was sanscript which was practised by Buddhist priests using Brahmi scripts for written communication. When the Maldivesconverted to Islam the language was then transformed to a new form of letters combining Arabic and san script. The transformation of the new letters were initially written from left to right and by the Islamic revolution changed the scripts from right to left and through time the language was transformed to new characters. The modern day language used in the Maldives isDhivehiThaana with 24 different letters and spoken on all local islands. There is evidence of copper plates which were kept safe in the old coral stone mosques with written letters ofevelaaakuru,dhivesakuru proving the written and spoken language.

As you will know we welcome visitors from all around the world to the Maldives but did you know that from as early as the 5th century early civilisation in the Maldives bought a mix of nationalities. People travelling from countries like East Africa, South Asian India and Sri Lanka sailed across the Indian Ocean. Why they arrived it is unsure but there is suggestion that they may have been traders or even ship wrecked.  Central Male Atoll was considered to have the largest population of migrants in the Maldives, with most living in the capital Male. During the time of conversion from Buddhism to Islam the population of Male was around 5000 people. In contrast today the City of Male’s population is over 150,000 people bringing the total population of the Maldives to 400,000 with people spread across 26 Atolls in the archipelago.

The Maldives was originally ruled by Kings and their families across different parts of the Atolls. The Maldivian Kings were called Sultans but by the 16th century the nation was brought together by one ruling family Sultanate. The Maldives ruling family Sultanate changed the constitution of Maldivian law to Republican and the monarchy ended when the countries first president Mohammed Ameen Didi was voted into office in 1953. He ruled for a total of eight monthsbefore the republic was abolished and replaced by the ruling monarchy again headed by his Royal Majesty King Mohamed Fareed. Fareed stayed in power from 1953 to 1967 whenIbrahim Nasir, the Maldives second republican President was then voted into power. This again saw the end of the ruling kings in the Maldives.

Early trade was made widely by a barter exchange using corrie shells. These were considered the 5th most valued currency and used for trade as early at the 5th century. Metal, iron, gold, silver and bronze were also considered high value and used for exchange.

By the end of the middle age in early 16th century, gold and silver coins were being used for currency. The economy was driven by pole and line fishing,a traditional method introduced by older generations and still widely used to this day. With infrastructure developments a change was brought about to the fluctuating economy as the Maldives embraced the tourism industry. Over a period of 40 years this was to was to grow the Maldives from a third world country to a developing country with a GDPcontribution of 34% from the tourism sector.

In 1558 trade and economy was influenced by the Portuguese after their fleets sailed to the west shore line beach of Malé and fought the ruling Sultan army. Ali Rassgefaanu was martyred by the Portuguese army who took control of the spice and economic trade of the Maldives. The country’s liberation was undertaken by Mohamed Takurufaanu and his compatriot took a powerful base in Mulaku Atoll Kolhufushi where he started a guerrilla campaign in the island against the Portuguese. In an attempt to block the ports built in Malé Mohamed Takurufaanu and his fleet attacked in 1573 AD which became the 1st Islamic month rabee’lawwal and brought an end to the foreign occupation. The Malabars tried to capture Maldives during the reign of Ibrahim Kalaafaanu who took power following the end of Muhamad Thakurufaan’s rule. The Malabars made two more attempts but Dhon Hassan Manikufanu, with the help of the French in Pondichcherry, India, defeated the Malabars. On the 16th of December 1887, the ruling monarch, Sultan Muinuddheen II, signed an agreement with the British governor of Sri Lanka Mr. A.H. Gordon, rendering the Maldives a British protectorate until independence from the British was declared on 26th July 1965 by Prime Minister Ibrahim Nasir. A day which we now celebrate as a holiday on an annual basis.

The first constitution was made in HakuraaGanduvaru in 1932 during the reign of Sultan ShamsuddinlllMajlis’, laying the groundwork for a representational form of government and law which abolished the Islamic Sharia law. The new constitutions were made by the parliament of Maldives called peoples Majilis. The laws were made to bring order as well as benefits to the population of the Maldives. A voting system for public election for president and parliamentary members was introduced as well as for island and city councils. The first parliament reception assembled on the Hakuraaganduvaru in Malé, one of the palaces of the Sultanate. The new Majilis building as you will see it in Male now was a gift from Pakistan in 1982.

The Maldives has a culture of Islamic celebrations. The tradition of Ramadan fasting was introduced by early generations and has brought the fashion of dressing for the special EID occasions. Women and men wear unique traditional dress; the woman’s clothing is called rai libaas (a red dress decoratedwith silk thread from the left shoulder to the right shoulder) and the men will wear a kalufeyli and hudhugamees( black kilt and a white shirt). The special Eid traditions include music played with big drums built on goat skin and trumpet flutes where men and women dance to the beat and sound of the music. I am always happy to join in the fun joy and laughter and to watch or even participate in these celebrations.

Let’s finish with a fact about food, as in my experience everyone loves food! The Maldives traditional cuisine is mainly based on tuna. A very common meal at home is Garudhiya which is a clear soup with a salty sour taste cooked with fresh tuna, rice and side dishes including rihaakuru (fish paste) and fihunumas (baabacu fish). In the time of the spice trade the flavours of cinnamon, cardamom were imported across from India and Sri Lankan introducing different varieties of curries which were made in local homes. The thelhihavaadhu (ground spice with grated coconut) was one of the products used to make the curries. Musamaariha, masriha, valhomasriha are popular Maldivian dishes served with rice or roshi (thin flat bread).When I loved on a fisherman Island one of our family members or a friend who worked on the fishing boats would bring fresh tuna to my home for special occasions.  I still sometimes buy fish direct from the fishing boat or failing that I visit Male fish market. Perhaps if you join me on a Male tour I can take you there.

Want to learn more about Maldives history, culture and tradition, join us on our daily half day Male City walking tours, departing at 09:00 and 14:00

Add gotothemaldives to your subscriptions feed